Was Jesus born in September or on December 25? — Using John the Baptist’s birth

Was Jesus born in September or on December 25? — Zacharias and John the Baptist 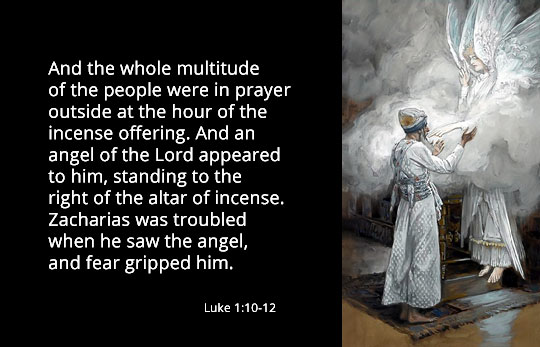 Starting With the Birth of John the Baptist

Some suggest that if we start with the birth of John the Baptist, we can arrive at the date of the birth of Jesus Christ. They refer to Luke 1:5-9 which states,

In the days of Herod, king of Judea, there was a priest named Zacharias, of the division of Abijah; and he had a wife from the daughters of Aaron, and her name was Elizabeth. They were both righteous in the sight of God, walking blamelessly in all the commandments and requirements of the Lord. But they had no child, because Elizabeth was barren, and they were both advanced in years. Now it happened that while he was performing his priestly service before God in the appointed order of his division, according to the custom of the priestly office, he was chosen by lot to enter the temple of the Lord and burn incense. Luke 1:5-9 (NASB)

This passage states that Zacharias was a priests of the Abijah division and he was in the temple burning incense. Then in verses 10-17 we are told that an angel visited him and announced the birth of his son, John the Baptist. It is usually assumed that John the Baptist was conceived soon afterwards. Six months later (Luke 1:26) the angel Gabriel announced the conception of Christ to Mary (Luke 1:27-38). Six months is an approximate number, probably accurate to within two weeks. Mayo Clinic states that forty weeks is the average gestation period for a baby.[1] Studies by the U.S. National Library of Medicine have demonstrated that the average gestation period of human babies is 38 weeks.[2] The thirty-eight weeks corresponds to 8.75 months(12 months x 38 weeks/52 weeks). This means that less than fifteen months after the angel’s announcement of the birth of John the Baptist, Christ was born. This is a very good timeline; but the difficulty is in determining the date of the angel’s announcement to Zacharias. The issue is the time when the Abijah division served in the temple. Therefore, we will next examine what Scripture states about the priestly divisions or courses.

1 Chronicles 24:1-19 describes how King David decided when the descendants of priests and Levites would serve in the temple. 1 Chronicles 24:4 states that David divided the priests and Levites into twenty-four courses, also called divisions. Then in verses 7-19 we are given the order in which these courses would serve. The decision was made by lot. The course of Abijah would serve eighth in the sequence (1 Chronicles 24:10). 2 Chronicles 23:8 states that each of the twenty-four courses would serve for seven days, from a Sabbath noon to Sabbath noon. Flavius Josephus informs us that the courses served for seven days.[3]  Flavius Josephus also describes the creation of the courses and the duration of their service.[4] Nehemiah 12:22-27, 45–46 describes the service of the Levites. 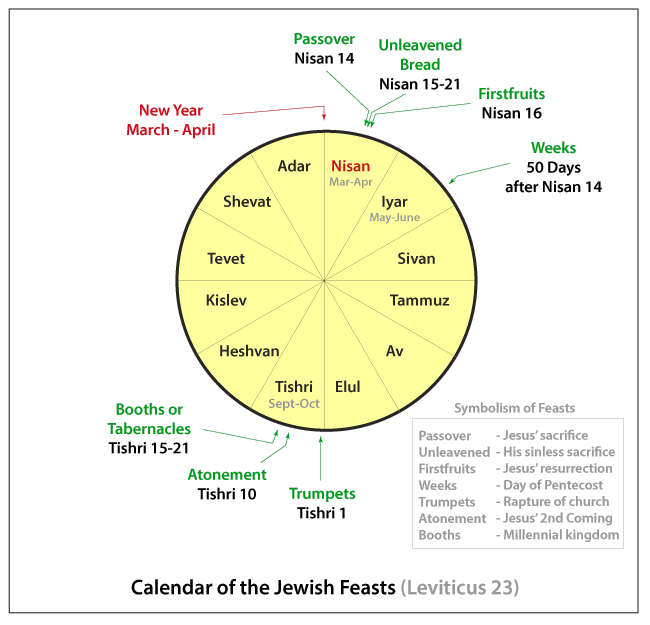 The Mosaic Law required that all males participate in the Feast of Unleavened Bread, Feast of Weeks and the Feast of Booths or Tabernacles.

First View — Zacharias Served on the Day of Atonement

Some claim that Zacharias was visited by the angel on the Day of Atonement (Luke 1:9), which occurs on Tishri 10. Adam English summarizes this view when he writes,

. . . it would seem that he entered the Temple sanctuary on the highest and holiest day of the year, the Day of Atonement, Yom Kippur. There, beside the altar of the Lord, a radiant angel gave news of the child to be born to Elizabeth. The date reckoned for this occurrence is September 24, based on computations from the Jewish calendar in accordance with Leviticus 23 regarding the Day of Atonement.[7]

Then he concludes that Jesus was born on December 25 by counting eighteen months from September 24.

According to Luke 1:26, Gabriel’s annunciation to Mary took place in the “sixth month” of Elizabeth’s pregnancy. Luke repeats the uniqueness of the timing in verse 36. Counting six months from September 24 we arrive at March 25, the most likely date for the annunciation and conception of Mary. Nine months hence takes us to December 25.[8]

Second, the date of the Day of Atonement assumes a specific year since the date varies year-to-year as the Hebrew calendar was a lunar calendar. Leviticus 23:26-27 says that the Day of Atonement occurred on Tishri 10. This date varies depending upon the year. But which  year did this view choose? A check with the Hebrew calendar reveals that none of the years from 6 B.C. to A.D. 1 give us the date of September 24. This view cannot be supported by the facts.

Since Zacharias did not burn incense on the Day of Atonement (see above), there are two other occasions when he might have served in the temple. One occasion is sometime after the month of Tishri. On the Feast of Tabernacles, all priests were available for service. This shifts the service for the Abijah course one week to the ninth week in the course rotation cycle. If we calculate the rotation of the priestly service from Tishri 1, the division of Abijah would have served as early as October 27 (5 B.C.) and as late as November 27 (7 B.C.).[9] In the year 2 B.C. he would have served in the week beginning on October 31. If we add fifteen months, we arrive at an approximate birth date range for Jesus  between January to February. Jack Finegan provides a similar calculation which suggests that Jesus could have been born between January to February.[10] Since the gestation period of Christ and John the Baptist could have varied by 3 to 5 weeks, Jesus could have been born in December or as late as March.

One of the major arguments against Christ being born in the November to February time period is that sheep would not be in the field in Bethlehem in those months due to the winter cold. This is a commonly raised argument. But Dr. Harry Mulder of the Netherlands has made this comment about the cold winters in Bethlehem.

During the brief Christmas vacation my wife and I traveled from Beirut to Jerusalem . . . On Christmas Eve in Shepherd Field a crowd had gathered to sing Christmas carols. We joined this crowd and took part in the singing. Right near us a few flocks of sheep nestled. Even the lambs were not lacking. It was a moving sight. It is therefore definitely not impossible that the Lord Jesus was born in December.[11]

Obviously, some days within a month might be very cold, but to claim that sheep would not have been in the Bethlehem fields assumes that we know the weather conditions when Christ was born. Therefore, Christ could have been born in the winter months of December to March.

Since the twenty-four priestly divisions served sequentially twice during a year, the first cycle would start in the month of Nisan and the second one in the month of Tishri. This means that the other possible occasion on which Zacharias could have served in the temple would be sometime after Nisan 1. This rotation of the priestly divisions was calculated from Nisan 1. This is the most likely option since Nisan-to-Nisan was the religious calendar. Tishri-to-Tishri was the civil calendar. Since during the Feast of Unleavened Bread and the Feast of Weeks all priests were available for service, the course of Abijah shifts two weeks to the tenth week in the rotation. If we calculate the rotation of the service of the priestly divisions from Nisan 1, then the division of Abijah could have served as early as the month of May 9 (2 B.C.) and as late as the month of June (7 B.C.). If we count fifteen months from the months of May and June, we arrive at August to early September as the approximate period for Christ’s birth. Jack Finegan provides the calculations which show that this suggests Jesus was born late in July to early September.[12]

Using this approach we arrive at two times in the year in which Christ could have been born: August to early September or December to March. However, these estimates are unreliable for at least two reasons:

2. During leap years, what happened to the priestly rotation in Adar 2? Could Zacharias have served during Adar 2? If so, Christ could have been born in May.

3. We also do not know how quickly Zacharias had marital relations with his wife in order for John the Baptist to be conceived. Additionally, we are not sure how quickly the Holy Spirit came upon Mary so that Christ was conceived. Did the Spirit delay 2-4 weeks?

4. Mary could have delivered Christ earlier or later than the average gestation period of forty weeks. The gestation period for human babies is generally 35 to 42 weeks[13]. That is a variation of 3 to 5 weeks on the gestation of Christ’s birth. Thus we cannot just count a fixed number of weeks to determine when Christ was born. Then Jesus could have been born in the May-to-March period.

In summary, attempting to determine the date of Christ’ birth by starting with the occasion when Zacharias served in the temple has serious flaws. This is an unreliable method. The witness of the early church fathers is more reliable since they were closer in time to the birth of Christ.

Was Jesus born on December 25? — Testimony of Historians
Can we determine the date of Christ’s birth from the visit of the magi?
What is the difference between chief priests and high priests?
Was Jesus born in September?
Feasts of the Lord
Fables of Christmas
Who were the priests and Levites in the Bible? – Differences and Relationship