Who were the priests and Levites in the Bible? – Differences and Relationship

Who were Levites in the Bible? - Levitical Priests

This brief study explains who were the Levites and the priests in the Bible. This study is important since it is not always immediately obvious who these individuals were. We will examine and explain their family heritage, establishment, duties and support of both the priests and Levites. 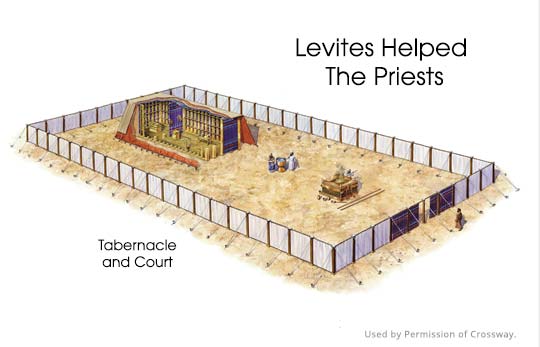 Family Heritage of the Priests and Levites

Both the priests and Levites were and are descendants of Levi who was a son of Jacob.  Our starting point is Genesis 46:8-11 where we are told that the patriarch Jacob was the father of Levi and the sons of Levi were Gershon, Kohath, and Merari.

1 Chronicles 6:1-3 states that Miriam was also a child of Amram.

The sons of Levi were Gershon, Kohath and Merari. The sons of Kohath were Amram, Izhar, Hebron and Uzziel. 3 The children of Amram were Aaron, Moses and Miriam . . .  1 Chronicles 6:1-3 (NASB)

Some quick points about Aaron, Moses and Miriam are as follows. The study “What is the relationship of Moses, Aaron, and Miriam?” reveals that the birth order was Aaron, Miriam and then Moses. Exodus 15:20 indicates that Miriam was the sister of Aaron. Exodus 4:14 also states that Moses was a brother of Aaron and Numbers 26:59 says that Aaron, Moses and Miriam were brothers and sisters.

Establishment of the Priesthood

Duties of the Priests and Levites

Now who are the Levitical priests? This is an important question since 1 Chronicles 23:2 refers to the priest and Levites.

And he gathered together all the leaders of Israel with the priests and the Levites. 1 Chronicles 23:2 (NASB)

Numbers 3:29-32 gives us the duties of the descendants of Kohath. These Levites had responsibility for the furnishings of the tabernacle. Numbers 4:1-20 provide more details. They camped on the southward side of the tabernacle.

Lastly, the descendants of Merari had responsibility for the wooden framework or structure of the tabernacle and court and all its fastenings and gear (Numbers 3:35-37). Numbers 4:29-49 provide more details. They camped on the northward side of the tabernacle.

All Levites employed in ministry and service had to be between the ages of twenty-five and fifty (Leviticus 8:24-26). That is,  an anointed priest or Levite had to retire at the age of fifty years. In summary, all priests were Levites from the tribe of Levi, but not all Levites were anointed priests, descendants of Aaron and his sons.

Support of the Priests and Levites

All the Levites, including the anointed priests, were supported through the tithe of the people (Leviticus 27:30-33; Numbers 18:21, 24-28). Special cities were designated for the Levites for their dwelling (Leviticus 25:32). The Levites were not to be numbered with Israel (Numbers 2:33). God took care of His priests and their helpers, the Levites.

After the death and resurrection of Christ, the Levitical priesthood was abolished. That is the message of Hebrews 9-10. Christ’s death and resurrection instituted a new covenant described in Luke 22:20 and Hebrews 8:7-13; 9:1-28. The Mosaic ceremonial law of sacrifices and priesthood no longer exists, because Jesus Christ has replaced it as our Merciful and Faithful High Priest.

Therefore he had to be made like his brothers in every respect, so that he might become a merciful and faithful high priest in the service of God, to make propitiation for the sins of the people. Hebrews 2:17 (NASB)

What is the difference between chief priests and high priests?
What is the relationship of Moses, Aaron, and Miriam?