Why did Judas betray Jesus since everyone knew Him?

Why did Judas betray Jesus since everyone knew Him?

Why did Judas betray Jesus? This is a common question. But why did Judas have to betray Jesus since so many knew Him and could recognize Him is not often asked. The answer to the question will be given in three parts. 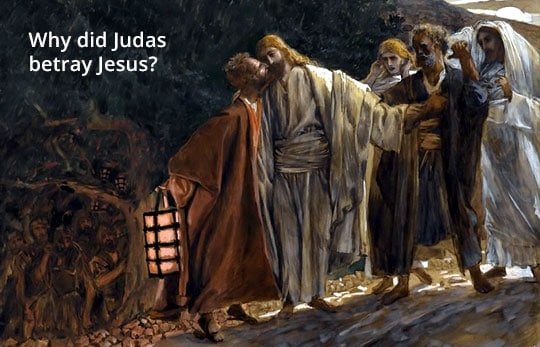 Early in Jesus’ ministry He chose twelve disciples and one of those disciples was a man named Judas. Matthew 10:4 and Mark 3:19 describe Judas as the one who betrayed Christ and Luke 6:16 says that he would be a traitor. Have you ever wondered why Jesus chose Judas since Christ knew the thoughts and motivations of men? We will discover the answer soon. In John 6:70-71 Jesus tells Peter and the disciples that one of the them was a devil. He does not mean that Judas was literally the devil but that his character was one of a devil.

Jesus answered them, “Did I Myself not choose you, the twelve, and yet one of you is a devil?” Now He meant Judas the son of Simon Iscariot, for he, one of the twelve, was going to betray Him. John 6:70-71 (NASB)

His heart was not devoted to God. John 12:6 adds that Judas was a thief and stole from a box that contained the money used to support Christ and the disciples. Judas was not a godly man!

We have very little information about Judas. Most of the information that we have about Judas occurred near and during the last week of Jesus’ ministry. All four gospels provide important information about how Judas betrayed Jesus. Matthew 26:14-16 tells us that Judas went to the chief priests and agreed to betray Christ in exchange for thirty pieces of silver.

Then one of the twelve, named Judas Iscariot, went to the chief priests and said, “What are you willing to give me to betray Him to you?” And they weighed out thirty pieces of silver to him. From then on he began looking for a good opportunity to betray Jesus. Matthew 26:14-16 (NASB)

Jesus and the disciples had their last meal together in a place called the Upper Room. John 13:2 states that the devil had already motivated Judas to betray Christ prior to this Passover Meal.

During supper, the devil having already put into the heart of Judas Iscariot, the son of Simon, to betray Him . . . John 13:2 (NASB)

This reveals that during the Passover meal one of the disciples was to prove to be a traitor; yet no one suspected him. There was nothing about his conduct that would arouse suspicion among the other disciples. But he was not a true disciple. He was a traitor. At the end of the meal, John 13:27 says that Satan entered Judas and he left to betray Christ.

John 18:2-12 describes Judas’ betrayal of Christ. Matthew 26:47-50 and Mark 14:43-45 tell us that Judas betrayed Jesus with a kiss. Then Jesus was taken away to be tried by the Sanhedrin Council and eventually to be crucified the next day.

Why did Judas betray Jesus since so many people knew who He was and could recognize Him? First, it is not obvious that everyone knew Christ. But the primary answer to the question is given in both John 17:12 and Acts 1:16-20.

While I was with them, I was keeping them in Your name which You have given Me; and I guarded them and not one of them perished but the son of perdition, so that the Scripture would be fulfilled. John 17:12 (NASB)

In John 17:12 Judas is called the son of perdition or destruction. This reveals that when Christ chose him as a disciple, it had been determined that Judas would betray Christ. Someone had to betray Christ in order to fulfill prophecy, and Judas was the man. Acts 1:16-20 gives us more insight.

Brethren, the Scripture had to be fulfilled, which the Holy Spirit foretold by the mouth of David concerning Judas, who became a guide to those who arrested Jesus. For he was counted among us and received his share in this ministry.” (Now this man acquired a field with the price of his wickedness, and falling headlong, he burst open in the middle and all his intestines gushed out. And it became known to all who were living in Jerusalem; so that in their own language that field was called Hakeldama, that is, Field of Blood.)
For it is written in the book of Psalms,
“LET HIS HOMESTEAD BE MADE DESOLATE,
AND LET NO ONE DWELL IN IT”;
and,
“LET ANOTHER MAN TAKE HIS OFFICE.”
Acts 1:16-20 (NASB)

The two prophecies quoted here are Psalm 69:25 and Psalm 109:8. Judas did betray his office as a disciple of Christ. He was a traitor. Judas had to betray Christ in order to fulfill the prophesies. Psalm 41:9 also adds,

Even my close friend in whom I trusted,
Who ate my bread,
Has lifted up his heel against me.
Psalm 41:9 (NASB)

The second answer to our question is given in Luke 22:1-6. The answer is that the chief priests and scribes were afraid of the people. They wanted to arrest Jesus as quietly and privately as possible and a traitor was a great solution. If the religious leaders had been bold and were not afraid of the people, then they would not have agreed to pay Judas to betray Christ. Their desire for secrecy helped fulfill the prophesies.

Now the Feast of Unleavened Bread, which is called the Passover, was approaching. The chief priests and the scribes were seeking how they might put Him to death; for they were afraid of the people. Luke 22:1-2 (NASB)

For those who struggle with God’s sovereignty and the doctrine of election, think about the next four verses in Luke 22.

And Satan entered into Judas who was called Iscariot, belonging to the number of the twelve. And he went away and discussed with the chief priests and officers how he might betray Him to them. They were glad and agreed to give him money. So he consented, and began seeking a good opportunity to betray Him to them apart from the crowd. Luke 22:3-6 (NASB)

Here we are told that Satan entered Judas and motivated him to agree to betray Christ. This had occurred prior to the Passover. (Matthew 26:14-16; Luke 22:14).

We have discovered that Christ chose a group of twelve disciples among whom one was a traitor. He was a thief. He was greedy and easily influenced by the devil or Satan. He was like some in our churches today who appear to be good  Christians. They may even think they are a good Christian. But they are not for real. Jesus said in the parable of the Wheat and Tares that there are tares or unbelievers in the church. They will turn traitor for self-serving purposes.

Does the Bible indicate that Judas was not saved?
Why did Jesus choose Judas Iscariot as a disciple?
If Judas was not a believer how could he cast out demons?
Did Jesus have two disciples named Judas?
Jesus Was Betrayed By a Friend Called Judas
What is the difference between chief priests and high priests?
Discipleship Training – Part 1