What will happen in heaven during the tribulation period?

What will happen in heaven during the tribulation period? 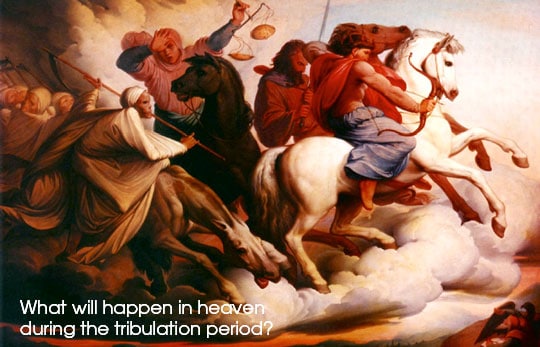 The rapture occurs prior to the tribulation period. The word rapture is described as being “caught up” in 1 Thessalonians 4:17. “Caught up” comes from the Greek word  harpazo which means “to snatch away or carry off.”

For the Lord Himself will descend from heaven with a shout, with the voice of the archangel and with the trumpet of God, and the dead in Christ will rise first. Then we who are alive and remain will be caught up together with them in the clouds to meet the Lord in the air, and so we shall always be with the Lord. 1 Thessalonians 4:16-17 (NASB)

When the rapture occurs, every believer is snatched up and removed from the world. Only unbelievers are left on the earth.

The rapture should not be confused with the Second Coming of Christ which will occur at the end of the tribulation (Revelation 19:11-21). This conclusion is clear for a number of reasons, but the most logical reason is that the rapture is described in 1 Thessalonians 4:16-17 and the beginning of the seven year tribulation is then described in 1 Thessalonians 5:1-3. Note that when Paul wrote the epistle of 1 Thessalonians there were no chapter divisions. Chapter five continues the sequential description of events in the future.

What happens next is the tribulation. The tribulation events are primarily revealed in the book of Revelation. Other related passages that provide additional details can be found in the Old Testament (Daniel 7:23-27; 9:27; Joel 2:28-3:17; Zechariah 12, 14:1-7) and New Testament (Matthew 24-25; 1 Thessalonians 5:1-11;  2 Thessalonians 1:5-2:12;  Hebrews 11:36-38). There are also many passages that describe other bits and pieces of what will occur in the tribulation. A graphical overview of what will occur in the tribulation is presented in “What are the 7 seals, 7 trumpets, 7 signs and 7 bowls of Revelation?”

The first major event in the tribulation is described in Revelation 4. Revelation 4:4-11 focuses on God’s throne room in heaven. In this passage God the Father is sitting on a throne surrounded with angels and the twenty-four elders. Other descriptions of God’s throne room are given in Exodus 24:10; Isaiah 6:1-13 and Ezekiel 1:26-28: 8:2.

Revelation 5 is still focused on the throne room and we are told that Christ will take a scroll from God the Father. When Christ takes the scroll, the angels will respond in worship. The scroll has seven seals on it which Christ will break one at a time (Revelation 6:1, 3, 5, 7, 9, 12). The seven seals represent the seven seal judgments which telescope into the seven trumpets which telescope into the seven bowls judgments. As Christ breaks the seals, we are given a high level overview of the horrors of the tribulation. Christ will be  in control of all the events throughout the tribulation period as He breaks one seal after another.

The first seal is broken in Revelation 6:1-3. It describes the conditions that exist during the first 3.5 years of the tribulation. It is described as a time of peace (compare verse 2 with 4). The seven seals symbolize war, famine, death, the martyrs in heaven and the terrors leading up to and surrounding the battle of Armageddon. It is a high level outline of the tribulation period. Revelation 6:9-17 reveals that there will be saints in heaven who will be watching and waiting for the second coming of Christ when He will come in judgment at the battle of Armageddon and vindicate their unjust deaths.

After the interlude of Revelation 7, the seventh seal is broken which unleashes the seven trumpets. Angels will inflict seven plagues (Revelation 8:7-9:21). The seven trumpets inflict four plagues upon the creation while the fifth and sixth trumpets release demonic forces upon the earth. The fifth trumpet allows Satan to have a key to the bottomless pit (Revelation 9:1-12). When the pit is opened, the demons in prison are released. The sixth trumpet is a vision of a demonic army moving down to the land of Israel (Revelation 9:13-21). This appears to be an invasion of the world’s armies into Israel, motivated by demonic forces, and culminating in the battle of Armageddon.

In Revelation 10 we are given another glimpse or interlude into what is happening in heaven. This time we see a strong angel descend from heaven and stand on the sea and land. The angel is not Christ. He claims possession of the earth in fulfillment of past prophecies. The tribulation which culminates in the battle of Armageddon is not only judgment but God reclaiming control of the world system (kosmos).

In Revelation 11 we are told that two witnesses will appear in the last half of the tribulation (Revelation 11:3). Notice that verse 3 refers to forty-two months or 3.5 years. This is the last half of the tribulation period since the first half will be a time of peace (Daniel 9:27). Some speculate that the two witnesses will be Moses and Elijah, but there is not enough proof to support that conclusion.  Eventually they will be murdered and the world will celebrate. But the world will be in shock and fear three days later when they are resurrected and return to heaven (Revelation 11:11). They will bear witness for God during those 3.5 years.

An interlude  in Revelation 14-15 gives more information to what is occurring in heaven. Revelation 14:1-14 is about the 144,000 witnesses once again, but this time they have been martyred and are in heaven. Revelation 14:6-20 focuses on seven angels who will present the gospel, warnings of eternal punishment for the unrepentant and unbelieving, and the wrath of God’s judgment at the battle of Armageddon (Revelation 14: 6, 8, 9, 14, 15, 17, 18). Revelation 15 is a transition to the last seven plagues called the seven golden bowls of wrath.

This series of plagues and punishment occur primarily near the end of the tribulation and at the battle of Armageddon. These plagues are isolated to the unbelievers on the earth (Revelation 16:2). The seven bowl judgments are described in Revelation 16:1-21. The sixth and seventh bowl judgments are about the battle of Armageddon.

Revelation 19 introduces us to the marriage supper of the Lamb (wedding feast) which occurs in the millennial kingdom. Revelation 21:9 tells us that the wedding has occurred and Christ and His bride are now living together. Revelation 19:11-20:3 describes the battle of Armageddon and the victory.

After the millennial kingdom, many of the unbelieving offspring from believers who enter the kingdom will rebel along with Satan and suffer an incredible defeat (Revelation 20:7-10).

Judgment follows for the unbelievers. All of them will be thrown into the lake of fire and remain there for eternity (Revelation 20:11-15). For a description of what will happen at the Great White Throne judgment read, “What does the Bible teach about the resurrection of the dead?” and “Seeking a Sign From Heaven?”