What will we see in heaven? – What happens after death?

What will we see when we get to heaven?

The greatest joy a Christian has is the anticipation of leaving this earth and being in heaven with God. When our final day is over, we will escape this evil and proud world and our sin infested, dying body. The apostle Paul expresses this great joy with just a few words.

He wanted to escape to heaven because God is there! Another reason for longing to be in heaven is that there is no sin, disease and dying (Revelation 21:4). In 2 Corinthians Paul affirms that when our earthly body dies, we will be with the Lord Jesus.

We are confident, I say, and would prefer to be away from the body and at home with the Lord. 2 Corinthians 5:8 (NASB)

What a joy it will be to be with the Lord!

But what will we see when we are present with the Lord? In 2 Corinthians 12:1-5 the apostle reveals that he visited heaven on one occasion, but he never tells us what he saw. It may be that he was not permitted to describe heaven just as Daniel was not permitted to reveal everything that he learned in his visions (Daniel 12:8-9). Contrary to many who claim that they have visited heaven and are eager to describe a white light and love all around, both Daniel and Paul do not describe everything that they saw.

Even more interesting is that scripture does not describe heaven as a white light with love all around. An incredibly fascinating description of God is given to us in Exodus when Moses, Aaron, Nadab and Abihu went up to Mount Sinai. Nadab and Abihu were sons of Aaron and priests and leaders (Exodus 24:1, 9; 28:1).

Then Moses went up  with Aaron, Nadab and Abihu, and seventy of the elders of Israel, and they saw the God of Israel; and under His feet there appeared to be a pavement of sapphire, as clear as the sky itself. Exodus 24:9-10 (NASB)

What did they see? They saw God and what they saw is extremely similar to what the prophet Ezekiel saw.

This is a vision of God in heaven. Notice that the throne of God appears as lapis lazuli. In Exodus 24:9-10 there was sapphire colored pavement under God’s feet. Lapis lazuli rock is a mixture of white and blue. God also appears as glowing metal, that is yellow-red surrounded with light. Some teach that God is man due to such descriptions but this is not true. The reader s urged to review the Q&A titled, “Is God a man or like a man?” The best description of God is that He appears as a rainbow. In verse 29 we are told that this is the glory of the Lord but to us God is a spirit (John 4:24) and God is light (1 John 1:5).

Now notice the reaction of the prophet Ezekiel. When he saw God the prophet fell to the ground. He did not have a conversation with God.

Revelation 4:2-3 has a very similar description.

Immediately I was in the Spirit; and behold, a throne was standing in heaven, and  One sitting on the throne. And He who was sitting was like a  jasper stone and a sardius in appearance; and there was a rainbow around the throne, like an emerald in appearance. Revelation 4:2-3 (NASB)

Sardius is a red colored gem and jasper is like a diamond. Emerald is green and so God appears as a rainbow once again. That is the best description of God that occurs in the Bible.

Description of the Current Heaven

But what does the current heaven look like? The answer is that heaven includes God. Therefore, we will see God. Next, Revelation 4:2-8 describes a throne on which God the Father will sit, twenty-four elders, a floor described as glass and crystal, and different types of angels.

Around the throne were twenty-four thrones; and upon the thrones I saw  twenty-four elders  sitting, clothed in  white garments, and  golden crowns on their heads. Out from the throne come flashes of lightning and sounds and peals of thunder. And there were  seven lamps of fire burning before the throne, which are  the seven Spirits of God; and before the throne there was something like a sea of glass, like crystal; and in the center and  around the throne, four living creatures  full of eyes in front and behind. The first creature was like a lion, and the second creature like a calf, and the third creature had a face like that of a man, and the fourth creature was like a flying eagle. And the  four living creatures, each one of them having six wings, are full of eyes around and within; and  day and night they do not cease to say, “Holy, holy, holy is the  Lord God, the Almighty,  who was and who is and who  is to come.” Revelation 4:2-8 (NASB)

In heaven we will also see seraphim. The prophet Isaiah writes,

Destruction of the Current Heaven

Isaiah 51:6 prophesies that at the end of the age both heaven and earth will be completely destroyed.

Lift up your eyes to the sky,
Then look to the earth beneath;
For the sky will vanish like smoke,
And the earth will wear out like a garment
And its inhabitants will die in like manner.
Isaiah 51:6 (NASB)

Isaiah 65:17 echoes the same truth. In 2 Peter we are also told that God will destroy everything.

But  the day of the Lord will come like a thief, in which the heavens will pass away with a roar and the elements will be destroyed with intense heat, and the earth and  its works will be burned up. 2 Peter 3:10 (NASB)

Finally, Revelation 20:11 tells us that God the Father will destroy both heaven and earth after Christ’s millennial kingdom.

Then I saw a great white throne and Him who sat upon it, from whose  presence  earth and heaven fled away, and no place was found for them. Revelation 20:11 (NASB)

Therefore, the message of scripture is that the current heaven will be destroyed. Now someone might say that Isaiah, Peter and the apostle John were just describing the destruction of the earth and universe. But that is not consistent with Revelation 21-22 which describe a new heaven and a new earth.  Revelation 21:1-4 says that God will dwell in this new heaven!

Then I saw a new heaven and a new earth; for the first heaven and the first earth passed away, and there is no longer any sea. And I saw the holy city, new Jerusalem, coming down out of heaven from God, made ready as a bride adorned for her husband. And I heard a loud voice from the throne, saying, “Behold, the tabernacle of God is among men, and He will dwell among them, and they shall be His people, and God Himself will be among them, and He will wipe away every tear from their eyes; and there will no longer be any death;  there will no longer be any mourning, or crying, or pain; the first things have passed away.” Revelation 21:1-4 (NASB)

The message is simple. The current heaven will be an incredible place where we will see God, angels, and the souls of the saints of the past; but it will come to an end some day.

Description of the Future Heaven

After the current heaven ceases to exist, there will be a new heaven, the eternal and final state, which is described in Revelation 21-22. This new heaven and new earth are combined together. There will also be a new Jerusalem (Revelation 21:10-27). The description is incredible. More information about the future heaven can be found in the studies titled:

The Glories of Heaven, part 1

The Glories of Heaven, part 2 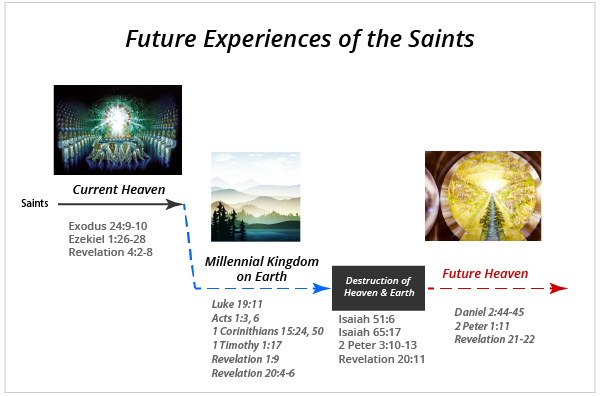