Is heaven described in the book of Revelation?

Is heaven described in the book of Revelation?

2 Corinthians 12:1-7 reveals that Paul caught a glimpse of heaven or Paradise. Paul reports in this passage,

Boasting is necessary, though it is not profitable; but I will go on to visions and revelations of the Lord. I know a man in Christ who fourteen years ago — whether in the body I do not know, or out of the body I do not know, God knows — such a man was  caught up to the  third heaven. And I know how such a man — whether in the body or apart from the body I do not know, God knows — was caught up into Paradise and heard inexpressible words, which a man is not permitted to speak. On behalf of such a man I will boast; but on my own behalf I will not boast, except in regard to my weaknesses. For if I do wish to boast I will not be  foolish, for I will be speaking the truth; but I refrain from this, so that no one will credit me with more than he sees in me or hears from me. Because of the surpassing greatness of the revelations, for this reason, to keep me from exalting myself, there was given me a  thorn in the flesh, a messenger of Satan to  torment me — to keep me from exalting myself! 2 Corinthians 12:1-7 (NASB)

Paul says that he had visions and revelations. Then he gives us the example of the time that he was caught up to the third heaven which he also calls Paradise. What did Paul see? Exodus 24:10; Ezekiel 1:26-28 and Revelation 4:2-8 gives us a glimpse of the present heaven. Here are Exodus 24:10 and Ezekiel 1:26-28.

. . .  and they saw the God of Israel; and under His feet there appeared to be a pavement of sapphire, as clear as the sky itself. Exodus 24:10 (NASB)

Revelation 4:2-8 is very similar to the Ezekiel passage.. The major difference between the two descriptions is that Revelation 4:2-8 includes two types of angels. All of these glimpses of God on a throne are of the current or present heaven. 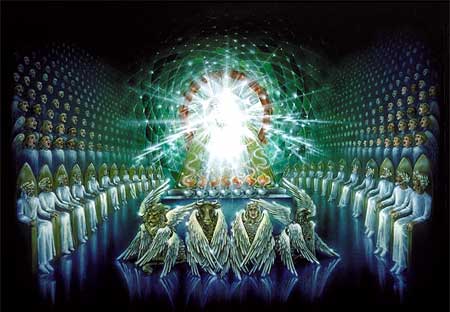 However, the current heaven will disappear at the end of the age and a new earth and new heaven will be created. The destruction of the present earth and heaven are described in the following two passages.

But  the day of the Lord will come like a thief, in which  the heavens will pass away with a roar and the  elements will be destroyed with intense heat, and the earth and  its works will be  burned up. . . . looking for and hastening the coming of the day of God, because of which the heavens will be destroyed by burning, and the elements will melt with intense heat! But according to His promise we are looking for new heavens and a new earth, in which righteousness dwells. 2 Peter 3:10, 12-13 (NASB)

Then I saw a great white  throne and Him who sat upon it, from whose  presence  earth and heaven fled away, and  no place was found for them. Revelation 20:11 (NASB)

The new heaven and earth are described in Revelation 21-22. A quick reading will reveal that the new heaven is a wonderful place. It would appear that Paul saw the present heaven but not the future heaven. The reader is encouraged to study the messages of Revelation 21 through 22.