What is the Pseudepigrapha? Should it be in the Bible?

What is the pseudepigrapha? Should it be in the Bible? 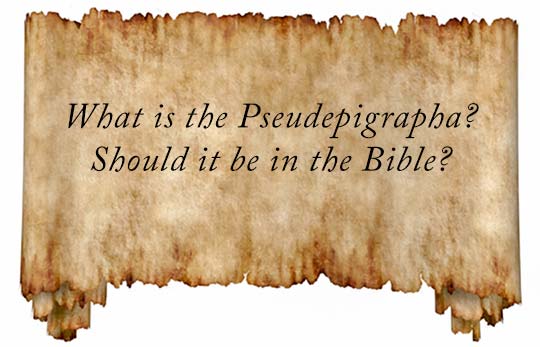 Pseudepigrapha Are Not Inspired Writings

The Pseudepigrapha is a group of books that have been rejected because they are not inspired by God. That is, the Holy Spirit did not move men to write them.

For no prophecy was ever made by an act of human will, but men moved by the Holy Spirit spoke from God. 2 Peter 1:21 (NASB)

As a result these books are considered to be false and spurious. None of these books are quoted or named in either the Old or New Testaments. Neither Jesus nor His disciples quote from them. The early church Fathers did not refer to them as authoritative.[1]

Some have claimed that Enoch I is quoted in Jude 14-15, but a careful evaluation reveals that such a claim is not supported by the facts. Others have claimed that the Assumption of Moses is also quoted in Jude 9., but again that is not supported by the evidence. Others claim that since 2 Timothy 3:8 refers to Jannes and Jambres, it is a reference to the book known as Jannes and Jambres. But since Jannes and Jambres was written sometime in the first to third centuries A.D., it is impossible to defend the view that 2 Timothy is a glancing reference to this book.

Contents of The Old Testament Pseudepigrapha

A partial list of the Old Testament Pseudepigrapha books is listed in this section. They were written between 200 B.C. to A.D. 200. The Roman Catholic Church refers to these books as to the Apocrypha. These are not to be confused with the books in the Catholic Bible often referred to as the Apocrypha by Protestants and the deuterocanonical books by the Roman Catholic Church. Geisler and Nix state,

An outstanding characteristics of these books is that they depict the bright future of the Messianic kingdom, as well as the questions of creation, angels, sin, suffering and rewards for faithful living.[2]

Since the actual list of books belonging to the Old Testament Pseudepigrapha depends upon new archaeological discoveries and the opinion of various authors, what follows is a partial list. The Letter of Aristeas is one of the most interesting books in the Pseudepigrapha since it is supposedly written by Ariteas, a court official in the time of Ptolemy II Philadilphus (285-246 B.C.). He claims to have been an eyewitness of the translation of the Old Testament into the Greek Septugaint by seventy-two scholars.  The following list of books are supplied by James Charlesworth.[3]

Pirke Aboth and Psalm 151 are included by some.[4]

Contents of The New Testament Pseudepigrapha

Just like the Old Testament Pseudepigrapha, the New Testament Pseudepigrapha is a group of books that are rejected by all. Among the most interesting are the Gospel of the Childhood, Gospel of the Nativity of Mary, Gospel of the Psuedo-Matthew, History of Joseph the Carpenter, Acts of Thomas, and the Letter Attributed to Our Lord. These books were written by Gnostics and other religious or cultic writers. These books are generally referred to by the cults and liberal theologians. In recent years there has been a preoccupation with the Gospel of Thomas and the Gospel of Peter. Both books are Gnostic writings. The Gospel of Philip was a centerpiece in the DaVinci Code.  They are not inspired. They are not accepted in Judaism or by Protestants and the Roman Catholic Church. The following list of books is supplied by Geisler and Nix.[5]

The books of the Pseudepigrapha cannot be trusted to be accurate. Only the Bible is trustworthy since God the Holy Spirit moved men to write it. The books are interesting to read as fiction. If they do contain any truth, it is unknowable.

What are the additional books of the Bible in the Catholic religion?
What Is The Apocrypha? Should It Be In The Bible?
Should the Deuterocanon be included in the Holy Bible?
How accurate is the Bible?
Is the book of Enoch inspired?
Da Vinci Code
What books belong in the Bible? – Canon of Scripture
What is the Tanakh and Talmud?