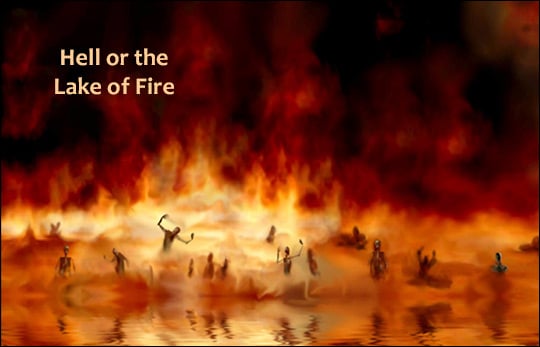 Lake of Fire Burns With Brimstone

And the beast was seized, and with him the false prophet who performed the signs in his presence, by which he deceived those who had received the mark of the beast and those who worshiped his image; these two were thrown alive into the lake of fire which burns with brimstone. Revelation 19:20 (NASB)

The phrase, lake of fire, is translated from the three Greek words limne ho pur. The first Greek word, limne, is commonly used to refer to a lake of water such as the Lake of Gennesaret (Lake of Galilee) in Luke 5:1. The second word, ho, means “the” and the third word can mean “fire.” We  have all seen fire and experienced fire. Fire gives off light. Fire is hot. It burns and hurts. The lake of fire is a lake of literal fire that hurts as it burns.

We are also told that this lake is filled with brimstone. The Greek word for brimstone is theion which refers to “sulfur.” That is, the lake of fire is actually an enormous sulfur fire. Anyone who has purchased a log for a fireplace that has been laced with sulfur has seen the blue flames leap as the log burns. A sulfur fire is not yellow and red as in the painting above. The following description of a sulfur fire is provided by the Worland, Wyoming volunteer fire department.

At first, it looks like a pool of wind-blown water with some occasional flames lapping at the surface. Then you realize what you’re looking at is all flame.

This is a burning sulfur mound. If you’ve ever been to a large landfill or even driven past one, then you’re familiar with the smell of sulfur — rotten eggs (hydrogen sulfide). The sulfur burning in this [photo] is what remains from the Texas Gulf Sulfur Plant that operated here in the 1950s, according to the Worland Fire Department. 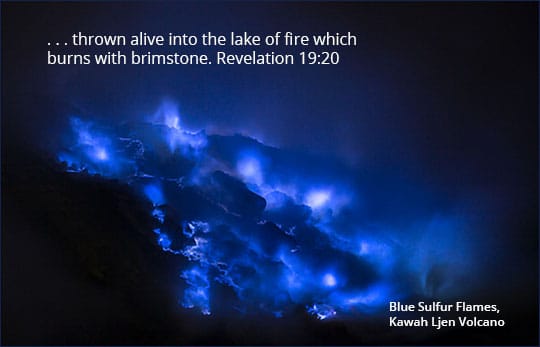 Sulfur is also flammable and difficult to extinguish. In fact, a few books of the Bible use it to describe hell. You may be familiar with “fire and brimstone” — brimstone being burning sulfur. Not only are you subject to eternal damnation in inextinguishable flames, but it also smells like rotten eggs.

The smoke produced by this fire is very dangerous. When sulfur burns it produces sulfur dioxide (SO2), which turns into sulfurous acid (H2SO3) when it comes in contact with water. That means it can be deadly if you breathe it into your very moist lungs. You’ll know sulfurous acid by another name, too — acid rain.[1]

This is a very serious fire!

Lake of Fire Burns Forever And Ever

Revelation 20:10, 14-15 tell us that the lake of fire never stops burning. It burns day and night

And the devil who deceived them was thrown into the lake of fire and brimstone, where the beast and the false prophet are also; and they will be tormented day and night forever and ever.  Revelation 20:10 (NASB)

And if anyone’s name was not found written in the book of life, he was thrown into the lake of fire. Revelation 20:15 (NASB)

Revelation 20:10 adds that the lake of sulfur fire burns forever and ever.

Lake of Fire Is Eternal Torment For Non-Christians

The lake of fire is also a place of everlasting heat, searing pain, and constant torment for non-Christians.

Jude 22-23 tells us that some individuals will be snatched “out of the fire” by fear. If you are not a Christian, you should be in fear for the lake of fire is your current destiny. Only the names of Christians are in the book of life and they will not be thrown into the lake according to Revelation 20:15. If you would like to know how to escape the lake of fire, or if you are not sure that you are a true Christian then visit Searching For God and read the five panels. They explain the good news about Jesus Christ and how to become a Christian.

Is Hell a Real Place?
Heaven, Paradise, Sheol, Hell, Hades and Lake of Fire
Did the people who crucified Christ go to hell or the Lake of Fire?
What is the second death in Revelation?
Searching For God
Are You A Christian? – Two Answers to Help