What is the Book of Remembrance in Malachi 3:16?

What is the Book of Remembrance in Malachi 3:16? 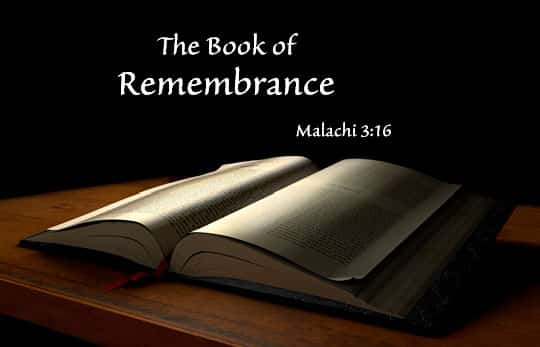 The first significant book mentioned in the Bible is the Book of Life.  We are told in Exodus 32:32, that Moses pleaded with the Lord to not punish the Israelites, but in stead to blot his name out of : “Your book.” It appears that he is referring to the Book of Life which records who will enter the eternal heaven. Who will enter heaven? Those who believe that Jesus Christ died on the cross and was resurrected from the dead so that our sins can be forgiven. Those who reject Christ will be thrown into the lake of fire (Revelation 20:12-15). Revelation 20:15 states,

And if anyone’s name was not found written in the book of life, he was thrown into the lake of fire. Revelation 20:12-15 (NASB)

Isaiah 4:3 also refers to a book that contains a list of “everyone who is recorded for life in Jerusalem.” This Jerusalem is the eternal city mentioned in Revelation 21:2.

It will come about that he who is left in Zion and remains in Jerusalem will be called holy — everyone who is recorded for life in Jerusalem. Isaiah 4:3 (NASB)

Daniel 12:1 also refers to the book of life.

“Now at that time Michael, the great prince who stands guard over the sons of your people, will arise. And there will be a time of distress such as never occurred since there was a nation until that time; and at that time your people, everyone who is found written in the book, will be rescued. Daniel 12:1 (NASB)

Book of the Living

The second book is the Book of the Living (Psalm 69:28). It keeps a record of those living upon the earth.

King David refers to this book in Psalm 139:16. In this passage we are told that God had recorded all the days of David’s life in “Your book” before he was born.

Your eyes have seen my unformed substance;
And in Your book were all written
The days that were ordained for me,
When as yet there was not one of them.
Psalm 139:16 (NASB)

This book appears to be a record of those who are living upon the earth.

The third significant book is the Book of Remembrance. At least five times in the Old Testament this book is mentioned in which we are told records are kept about us. Malachi 3:16 refers to this book,

Then those who feared the LORD spoke to one another, and the LORD gave attention and heard it, and a book of remembrance was written before Him for those who fear the LORD and who esteem His name.  Malachi 3:16 (NASB)

Revelation 20:12 refers to “books were opened.” These books contain records of all the evil deeds of unbelievers—those who reject Christ. On the day of judgment, these records will be used to demonstrate that God is justified in sentencing unbelievers to an eternity in hell. Three other references may also refer to the Book of Remembrance. They are Isaiah 62:6-7, Nehemiah 13:14, and Isaiah 65:6-7 .

On your walls, O Jerusalem, I have set your watchmen; all the day and all the night they shall never be silent. You who put the LORD in remembrance, take no rest, and give him no rest until he establishes Jerusalem and makes it a praise in the earth. Isaiah 62:6-7 (NASB)

Remember me for this, O my God, and do not blot out my loyal deeds which I have performed for the house of my God and its services. Nehemiah 13:14 (NASB)

Behold, it is written before Me, I will not keep silent, but I will repay; I will even repay into their bosom, Both their own iniquities and the iniquities of their fathers together,” says the LORD. “Because they have burned incense on the mountains And scorned Me on the hills, Therefore I will measure their former work into their bosom.” Isaiah 65:6-7 (NASB)

Isaiah 65:6-7 reveals that God has a record of the sins or iniquities of those who have rejected Him. God will punish them according to their deeds.

When Revelation 20:12 refers to “books were opened,”  although not named here, these books may include the Book of Life, the Book of the Living, and the Book of Remembrance. The books mentioned in Revelation 20:12 will be used to demonstrate that those who did not believe in Christ, will be sent to the Lake of Fire. These individuals will live there for eternity. What is your destiny? If you are not sure, visit Searching For God.