The Book of Life occurs seven times in the Bible. All them occur in the New Testament. The term Book of the Living appears only one time in the Old Testament. This Q&A explains the meaning and purpose of both books. 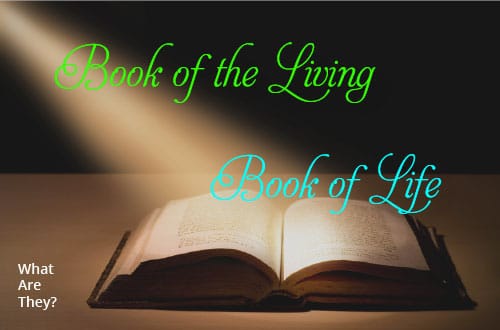 Meaning of the Book of Life

The Book of Life occurs in the New Testament one time in Philippians (Philippians 4:3) and  six times in the book of Revelation (Revelation 3:5; 13:8; 17:8; 20:12, 15; Revelation 21:27).  The Greek phrase translated as Book of Life is biblion ho zoe. The first Greek word can be translated as “book, roll, scroll, record” or “the contents of a book.” The second Greek word means “the.”  The third Greek word, zoe, means “life” or “vitality.” Taken together the Book of Life refers to those who will have vitality of life.

Philippians 4:3 reveals that the names of Christians are written in the Book of Life.

Indeed, true companion, I ask you also to help these women who have shared my struggle in the cause of the gospel, together with Clement also and the rest of my fellow workers, whose names are in the book of life. Philippians 4:3 (NASB)

But this verse does not tell us when the names were written in the book or the significance of the Book of Life.

However, we find help in the book of Revelation. In Revelation 3:5 we are given the assurance that once a person’s name is written in the book, it will never be removed.

He who overcomes will thus be clothed in white garments; and I will not  erase his name from the book of life, and I will confess his name before My Father and before His angels. Revelation 3:5 (NASB)

The English word “not” in this verse is actually two Greek words, ou me. Both words mean not. Therefore, we are supposed to understand this as a promise that those who overcome will never have their name removed from the book of life. What does overcome mean? 1 John 5:5 answers that question. Those who overcome are Christians since they believe Christ is God (John 8:24, 58).

Who is the one who overcomes the world, but he who  believes that Jesus is the Son of God?  1 John 5:5 (NASB)

That is, those who believe Christ is God submit themselves and will never ever lose their salvation. This is a promise.

In Revelation 13:8 and 17:8 we are told that the names of those who believe in Christ were already written in the book of life before the world was created. That is an amazing statement. It reveals God already knew who was going to believe in Christ and trust Him as Savior and Lord. The following verse illustrates that those who worship the Antichrist are unbelievers whose names are missing from the Book of life.

All who  dwell on the earth will worship him, everyone whose name has not been  written  from the foundation of the world in the book of life of  the Lamb who has been slain. Revelation 13:8 (NASB)

The final verses in Revelation (Revelation 20:12, 15; Revelation 21:27) teach us that those individuals whose names are written in the Book of Life will  go to heaven.

And I saw the dead, the great and the small, standing before the throne, and books were opened; and another book was opened, which is the book of life; and the dead were judged from the things which were written in the books, according to their deeds. Revelation 20:12 (NASB)

And if anyone’s name was not found written in the book of life, he was thrown into the lake of fire. Revelation 20:15 (NASB)

The final verse in Revelation is a promise to those who will be living in heaven that no evil will be allowed to exist in heaven.

. . . and nothing unclean, and no one who practices abomination and lying, shall ever come into it, but only those whose names are written in the Lamb’s book of life. Revelation 21:27 (NASB)

What is the meaning of the Book of Life? The answer is that the book of life contains the names of every person who will go to heaven and spend eternity with God. Everyone else will go to the lake of fire. God wrote the book before the world was created and those who were predestined to believe in Christ were written in the book.

Meaning of the Book of the Living

The Book of the Living occurs only in Psalm 69:28. In Exodus 32:33 it appears to be called My Book.  In Psalm 69 David is pleading with the Lord to remove his enemies. Then in verses 27 and 28 he asks God to not let them enter heaven and to kill them. That has been David’s plea.

It is important to notice that both the English Standard Version (ESV) and the New King James Bible Version (NKJV) change “life” to “living.” Both are better translations of the Hebrew since the Hebrew word for life, hay, means “alive or living.” That is, God has two types of books. This book contains the names of all those living upon the earth and the Book of Life contains the names of those who will live in heaven, beyond this life. It is obvious that David understood this when he prayed that God not let his enemies enter heaven and have them die immediately.

The Book of the Living (Psalm 69:28) contains the names of those who are alive upon this earth. This book is constantly being updated and revised as people are born and die. But the Book of Life contains the names of those who have and will believe in Christ as their Savior and Lord. Those names were written before the creation of the universe. Only these individuals will go to heaven and live there forever.

Does Jesus disagree with the God of the Old Testament?
Looking Real Good
Would God blot someone’s name from the Book of Life?
Are the names of the chosen already written in the Lamb’s Book of Life?
Searching for God
Saved Only Once
What must a person do to go to heaven when they die?