Will those in the Book of Life have to refuse the mark of the beast?

Revelation 13:5-8 tells us that the antichrist was given authority to make war against the saints and overcome them. Everyone on the earth will worship him except for those whose names are written in the Book of Life of the Lamb who has been slain. Then Revelation 13:16-17 tells us that everyone who does not have the mark of the beast will not be able to buy or sell. Therefore, the question we are concerned with is, “Will those in the Book of Life have to refuse the mark of the beast?” Will they die if they refuse the mark or will they be protected? Will Christians have to take a stand? 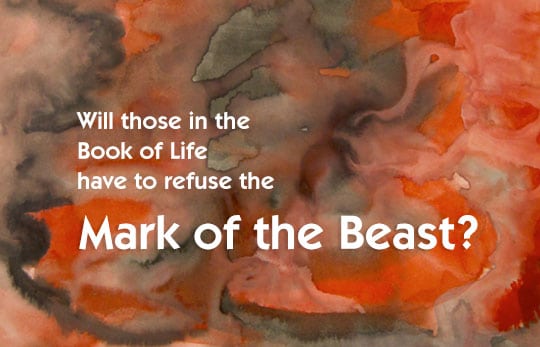 There are four important passages that provide the answer to our question. The first is Revelation 14:9-10.

Then another angel, a third one, followed them, saying with a loud voice, “If anyone worships the beast and his image, and receives a mark on his forehead or on his hand he also will drink of the wine of the wrath of God, which is mixed in full strength in the cup of His anger; and he will be tormented with fire and  brimstone in the presence of the holy angels and in the presence of the Lamb. Revelation 14:9-10 (NASB)

Here we are told that anyone who receives the mark of the beast will “drink of the wine of the wrath of God.” That is, they will be judged by God and go to the lake of fire which burns forever and forever (Revelation 19:15-20). Notice that we are told the angels and Christ will see them being tormented forever. Now notice the word “receives.” The Greek word is lambano. It refers to the receiver accepting something. That is, anyone who accepts the mark will be judged.

Two verses later we are told that the saints, that is, the Christians will not accept the mark of the beast.

Here is the perseverance of the saints who keep the commandments of God and their faith in Jesus. Revelation 14:12 (NASB)

The Greek for “perseverance” is hupomone. The word literally means to “continue under” such as in a bad situation. That is, Christians will refuse the mark of the beast and choose death rather than worship the beast by receiving the mark. The sign that someone is a Christian is that they will refuse to accept the mark on their forehead or on their hand.

The third passage about the mark of the beast is Revelation 19:20.

And the beast was seized, and with him the false prophet who performed the signs in his presence, by which he deceived those who had received the mark of the beast and those who worshiped his image; these two were thrown alive into the lake of fire which burns with brimstone. Revelation 19:20 (NASB)

The fourth passage is Revelation 20:4. This time we are told that Christians will not receive the mark.

Then I saw thrones, and they sat on them, and judgment was given to them. And I saw the souls of those who had been beheaded because of their testimony of Jesus and because of the word of God, and those who had not worshiped the beast or his image, and had not received the mark on their forehead and on their hand; and they came to life and reigned with Christ for a thousand years. Revelation 20:4 (NASB)

It is easier to accept Jesus Christ now rather than during the tribulation period. 2 Corinthians 6:2 urges us to be saved from the fiery hell that awaits those who reject Christ.

If you believe that when Jesus Christ died on the cross for our sins and was resurrected three days later, He did everything that is necessary for your sins to be forgiven and for you to receive the gift of eternal life, then I urge you to tell Him. Ask Him to forgive your sins and take over your life now. Then you will not have to fear the horrors of the coming tribulation and the consequences of receiving the mark of the beast. Those who become Christians before the tribulation will be raptured before the tribulation begins.