Should a Christian support a non-Christian in an evil activity?

Should a Christian support a non-Christian in an evil activity? 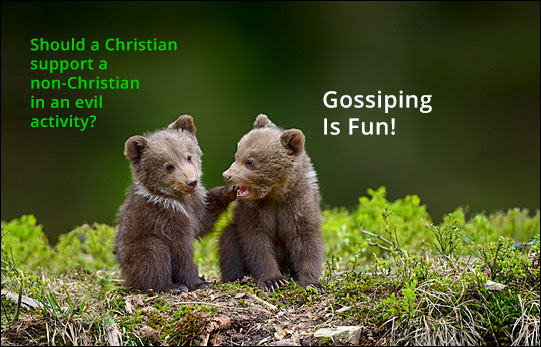 Non-Christians Urge Others To Sin With Them

. . . being filled with all unrighteousness, wickedness, greed, evil; full of envy, murder, strife, deceit, malice; they are gossips, slanderers, haters of God, insolent, arrogant, boastful, inventors of evil, disobedient to parents, without understanding, untrustworthy, unloving, unmerciful; and although they know the ordinance of God, that those who practice such things are worthy of death, they not only do the same, but also give hearty approval to those who practice them. Romans 1:29-32 (NASB)

Verse 32 reveals that non-Christians want everyone to join them in their evil deeds. Notice that verse 32 says they give “hearty approval.” That is, they will urge and encourage Christians to support their sin and join in the fun!

The Bible reveals that a true Christian will increasingly sin less with time (Romans 8:12-14) since the Holy Spirit is dwelling with them (Romans 8:9). Yes, there is a war within every Christian between the desires of their flesh and the desire of the Spirit; but if they are a true Christian, they will increasingly have victory (Galatians 5:16-23; 1 John 2:12-14). For more information visit “Filled With The Spirit.”

A true Christian will desire to be holy and be pleasing to God.  Moses is a good example. Hebrews 11:25-26 says that Moses denied himself the pleasures of sin for Christ.

. . . choosing rather to endure ill-treatment with the people of God than to enjoy the passing pleasures of sin, considering the reproach of Christ greater riches than the treasures of Egypt; for he was looking to the reward. Hebrews 11:25-26 (NASB)

He fled sin. Joseph fled Potifar’s wife who repeatedly urged him to have sexual intercourse with her (Genesis 6:6-15). Joseph is a wonderful example for us. We need to flee sin too!

In 1 Peter 1:16 God commands every Christian to be holy.

That is, every Christian is to be holy in character. One who is holy will be righteous.  Consequently, this creates a problem for Christians since non-Christians are slaves to sin (Romans 6:6) and under the control of the devil (1 John 5:18-19).

Therefore, Christians and non-Christians have very little in common, except for the things of this world. That is why the apostle Paul tells Christians to not be bound with non-Christians. The Greek word for “bound” refers to being “yoked together” like oxen which pull a wagon. Note that Belial is another term for the devil or Satan.

Do not be bound together with unbelievers; for what partnership have righteousness and lawlessness, or what fellowship has light with darkness? Or what harmony has Christ with Belial, or what has a believer in common with an unbeliever? 2 Corinthians 6:14-15 (NASB)

This eliminates business ventures and other joint activities between Christians and non-Christians.

Christians are also commanded to marry only Christians and not non-Christians. The following command is consistent with the preceding passages.

A wife is bound as long as her husband lives; but if her husband is dead, she is free to be married to whom she wishes, only in the Lord. 1 Corinthians 7:39 (NASB)

The following verses are proverbs that contrast Christians and non-Christians. As you read them, note that each one compares the wicked to the righteous. A righteous person is defined as one whose conduct is holy.

Do not enter the path of the wicked
And do not proceed in the way of evil men.
Avoid it, do not pass by it;
Turn away from it and pass on.
Proverbs 4:14-15 (NASB)

But the path of the righteous is like the light of dawn,
That shines brighter and brighter until the full day.
The way of the wicked is like darkness;
They do not know over what they stumble.
Proverbs 4:18-19 (NASB)

The way of the wicked is an abomination to the LORD,
But He loves one who pursues righteousness.
Proverbs 15:9 (NASB)

He who says to the wicked, “You are righteous,”
Peoples will curse him, nations will abhor him;
But to those who rebuke the wicked will be delight,
And a good blessing will come upon them.
Proverbs 24:24-25 (NASB)

Consequently, Christians have nothing in common with non-Christians. The only thing they share is life on this planet and the things of this world. An ongoing close relationship will eventually affect a Christian.

The following two verses should be memorized.