Does Joel 2:23-26 promise blessing if we make financial sacrifices? — Day of Atonement 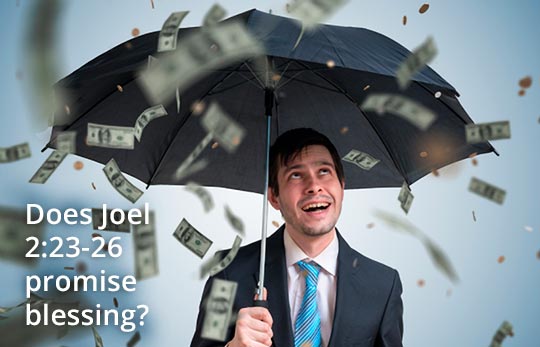 Therefore, Joel 2:23-32 is a prophetic passage about events that will start in the last part of the future tribulation period. The first part of Joel 2:23-32 refers to God’s promise of a blessing on the nation of Judah – the promise of physical restoration.

So rejoice, O sons of Zion,
And be glad in the LORD your God;
For He has given you the early rain for your vindication.
And He has poured down for you the rain,
The early and latter rain as before.
The threshing floors will be full of grain,
And the vats will overflow with the new wine and oil.
Then I will make up to you for the years
That the swarming locust has eaten,
The creeping locust, the stripping locust and the gnawing locust,
My great army which I sent among you.
You will have plenty to eat and be satisfied
And praise the name of the LORD your God,
Who has dealt wondrously with you;
Then My people will never be put to shame.
Joel 2:23-26 (NASB)

The reference to the early and latter rain, also called the latter and former rains, is not about God offering us money. It was God’s promise to bless the nation of Judah by taking care of their crops and trees after the swarming locust, creeping locust and stripping locust had destroyed the land (Joel 1:4). That is, after God had punished the nation by sending a massive swarm of locusts, He would bless them in the future by bringing rain and causing their crops to grow. That was the promise.

But some teachers and preachers claim that Joel 2:23-26 teaches that God will bless a person if they give money to their ministry or to some other ministry. However, the passage does not teach that. First, it is a promise to the Jewish nation and not to Gentiles. God has promised to bless those who give to Him, but this passage does not teach that. Second, this is a blessing on crops or we could say on our work efforts.

Joel 2:27-32 refers to the last part of the tribulation, which will occur during the eschatological Day of the Lord, when God will pour the Holy Spirit  (Acts 2:17-21).

Thus you will know that I am in the midst of Israel,
And that I am the LORD your God,
And there is no other;
And My people will never be put to shame.

It will come about after this
That I will pour out My Spirit on all mankind;
And your sons and daughters will prophesy,
Your old men will dream dreams,
Your young men will see visions.
Even on the male and female servants
I will pour out My Spirit in those days.
I will display wonders in the sky and on the earth,
Blood, fire and columns of smoke.
The sun will be turned into darkness
And the moon into blood
Before the great and awesome day of the LORD comes.
And it will come about that whoever calls on the name of the LORD
Will be delivered;
For on Mount Zion and in Jerusalem
There will be those who escape,
As the LORD has said,
Even among the survivors whom the LORD calls.
Joel 2:27-32 (NASB)

The last part of Joel 2:32 begins a description of the last part of the tribulation (Joel 2:32b-3:16; Zechariah 12:1-14; Revelation 6-18) when the Holy Spirit will be poured out on the nation of Israel. Zechariah 12:10 tells us that Israel will mourn when they see Jesus Christ coming.

I will pour out on the house of David and on the inhabitants of Jerusalem, the Spirit of grace and of supplication, so that they will look on Me whom they have pierced; and they will mourn for Him, as one mourns for an only son, and they will weep bitterly over Him like the bitter weeping over a firstborn. In that day there will be great mourning in Jerusalem, like the mourning of Hadadrimmon in the plain of Megiddo. Zechariah 12:10-11 (NASB)

Romans 11:25-26 states that all Israel will be saved. God will pour out the Holy Spirit and an incredible awakening will occur and the remaining Jews will believe.

For I do not want you, brethren, to be uninformed of this mystery — so that you will not be wise in your own estimation — that a partial hardening has happened to Israel until the fullness of the Gentiles has come in; and so all Israel will be saved; just as it is written, “THE DELIVERER WILL COME FROM ZION, HE WILL REMOVE UNGODLINESS FROM JACOB.” Romans 11:25-26 (NASB)

This brief outline of the book of Joel helps us understand that Joel 2:23-26 has nothing to do with the day of Pentecost or the Day of Atonement. Joel 2:23-26 is simply a promise of God’s material blessing on the nation of Judah that will begin at the end of the tribulation and continue into the millennial kingdom.

The promises of Joel do not directly relate to Pentecost, and Joel 2:23-26 is not related to the Day of Atonement. There is nothing wrong with celebrating either feast today. The study series Feasts of the Lord will provide you more information about these feasts. Communion is also a remembrance of Jesus’ death and return to life. Joel 2:28-3:21 is a Prophecy of the Future.

The Shadow Is Replaced
Picture of Jesus
Escape By His Blood
Tithing or Giving?
How To Study The Bible
Why do the sacrifices return in Ezekiel's temple?