Escape By His Blood

In the March 25, 1991 issue of the U.S. News and World Report magazine, several articles on hell were featured. In the article entitled, “Revisiting the abyss” John Dominic Crossan of DePaul university was quoted as saying, “Once we discovered that we could create hell on earth, it became silly to talk about it in a literal sense.” Or, according to Stephen J. Patterson, a literal hell is “part of an understanding of the cosmos that just doesn’t exist anymore.” In other words, the concept of a real hell with eternal torment is silly to him. But maybe the most interesting quote came from the Rev. Mary Kraus, “My parishioners are upper-middle-class, well-educated critical thinkers who view God as compassionate and loving, not someone who’s going to push them into eternal damnation.” If they are correct, then Jesus’ death was silly too! Jesus wasted His life! 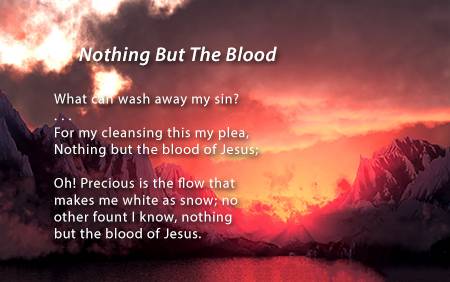 The Mosaic sacrificial system has been the focus of Hebrews 7-9 – the shedding of blood for cleansing from sin. The Holy Spirit has taught us that the Old Covenant was never supposed to last forever. It was temporary. It was only a copy, a picture, a shadow of something yet to come. Something better was coming. 2 Corinthians 3:9 says the old Mosaic Law – while inferior – had glory, but the New Covenant which was coming had more glory.

The Old Covenant came with mortal, sinful priests, faulty sacrifices, and an earthly tabernacle, Jesus came as the eternal high priest, a perfect sacrifice – Himself – and a divine tabernacle – heaven. The New Covenant brought not a type, not a shadow, not a picture, but the real thing.

The high priests under the Mosaic Law could only enter the Holy of Holies once a year and only after an animal’s blood was shed. But when Jesus, the eternal, faithful, and merciful high priest came, He entered the Holy of Holies – heaven – forever by His own blood. This is the message of Hebrews 9:11-12.

But when Christ appeared as a high priest of the good things to come, He entered through the greater and more perfect tabernacle, not made with hands, that is to say, not of this creation; and not through the blood of goats and calves, but through His own blood, He entered the holy place once for all, having obtained eternal redemption. Hebrews 9:11-12 (NASB)

It is important to note that while the Greek word for “holy place” in verse 12 means holy, it is in the plural. That means it refers to the Holy of Holies. We will see in a few minutes that it also refers to heaven. That is where Jesus entered by His own blood.

Have you ever asked, “Why did Jesus need to die? Why was blood necessary?” That question will be answered in the rest of this study. It is a question that I once asked myself. The first answer to that question is, “Jesus’ Blood Is Superior,” and it is given in the next two verses.

His Blood Is Superior

In the Old Testament goats, bulls, and calves were offered as sacrifices to provide temporary forgiveness of a person’s sins (Lev. 1-5). Sometimes a person needed to be “cleansed” on the outside too. Such cleansing was necessary if the person touched a dead person or gave birth to a child, for example.

If this happened, God required that the ashes of a heifer be sprinkled on the person for external cleansing.

There was never any real forgiveness with the blood of bulls, goats, and heifers. So the Holy Spirit answers the question, “Why not Jesus?” with,

For if the blood of goats and bulls and the ashes of a heifer sprinkling those who have been defiled, sanctify for the cleansing of the flesh, how much more will the blood of Christ, who through the eternal Spirit offered Himself without blemish to God, cleanse your conscience from dead works to serve the living God? Hebrews 9:13-14 (NASB)

Jesus is the better sacrifice. He sacrifices Himself without blemish. He was without sin. Jesus’ blood cleanses our conscience forever. The animal sacrifices could only cleanse the flesh forever.

When Jesus died the ritual sacrifices were gone. The animal sacrifices only cleansed the outside forever, but Jesus’ sacrifice forgave our sins forever. When Jesus forgives our sin, he does it forever. Does Hebrews teach that we can lose our salvation? If so, then Jesus blood does not forgive us forever – only temporarily or “only year by year.”

For The New Covenant

The second reason for Jesus’ blood was to install the New Covenant.

And for this reason He is the mediator of a new covenant, in order that since a death has taken place for the redemption of the transgressions that were committed under the first covenant, those who have been called may receive the promise of the eternal inheritance. For where a covenant is, there must of necessity be the death of the one who made it. For a covenant is valid only when men are dead, for it is never in force while the one who made it lives. Therefore even the first covenant was not inaugurated without blood. For when every commandment had been spoken by Moses to all the people according to the Law, he took the blood of the calves and the goats, with water and scarlet wool and hyssop, and sprinkled both the book itself and all the people, saying, “THIS IS THE BLOOD OF THE COVENANT WHICH GOD COMMANDED YOU.” And in the same way he sprinkled both the tabernacle and all the vessels of the ministry with the blood. And according to the Law, one may almost say, all things are cleansed with blood, and without shedding of blood there is no forgiveness. Therefore it was necessary for the copies of the things in the heavens to be cleansed with these, but the heavenly things themselves with better sacrifices than these. Hebrews 9:15-23 (NASB)

Today we would call this a “Last Will and Testament” or simply a will. A will is something that tells others how to distribute remaining possessions and money after you die. The will does not become effective until you die. It requires your death. This is the picture here. The first covenant or will required the death of an animal. Then the Mosaic law became effective. So Jesus death was required for the new will or New Covenant (new promise ) to become effective. Ever since Adam sinned, God has often required the death of an animal to seal a promise. 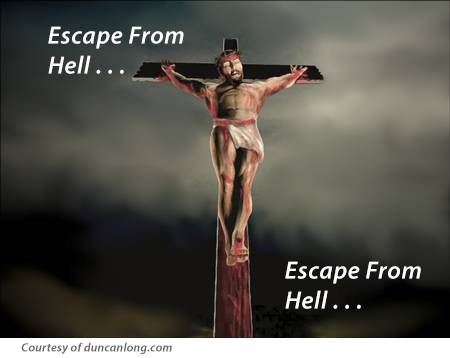 Not only was Jesus the perfect sacrifice (Heb. 4:15; 7:26-28), not only did His death cause the new will or covenant to become effective, but His death put away our sin forever when He entered the Holy of Holies or heaven.

For Christ did not enter a holy place made with hands, a mere copy of the true one, but into heaven itself, now to appear in the presence of God for us; nor was it that He should offer Himself often, as the high priest enters the holy place year by year with blood not his own. Otherwise, He would have needed to suffer often since the foundation of the world; but now once at the consummation of the ages He has been manifested to put away sin by the sacrifice of Himself. Hebrews 9:24-26 (NASB)

The Holy Spirit paints a picture for us of Jesus entering not an earthly tabernacle but heaven itself. He is seated next to God the Father. Jesus entered heaven after He died for our sins.

And inasmuch as it is appointed for men to die once and after this comes judgment, so Christ also, having been offered once to bear the sins of many, shall appear a second time for salvation without reference to sin, to those who eagerly await Him. Hebrews 9:27-28 (NASB)

Most people who stop long enough to think about what happens to them after they die worry about their future after death. Most of us believe there is something after death. That is why the vast majority of the world believes in a god. Most of us believe something good or something bad happens to us after this life. This past week I was listening to a man who claimed he was an atheist. Unfortunately, he may not realize that God has already described him.

He does not realize that judgment is coming. I remember crying myself to sleep some nights as a young boy begging God to take me to heaven and not let me go to hell. I realized that I was a sinner and God was not. I knew that some day I would die and then something would happen. I would appear before Him, and He was going to judge me.

This passage says that God will judge us! Judgment is coming! For many, their judgment will be eternal life in the Lake of Fire. But for those who are eagerly waiting Jesus’ coming, our judgment is “without reference to sin.” That means those who are anxiously waiting for Jesus will NOT be judged by our sins. This is one mark of a Christian. Real Christians are eager for Jesus to return. Is this true of you? A true Christian is one who believes that Jesus died for our sins and returned to life, and is depending on Jesus for forgiveness of our sins!

Jesus was the perfect, eternal sacrifice. The last verse in Hebrews 9 says that He is coming again. When He comes back, He returns without reference to sin. There is no purgatory. There is no suffering. There is no hell. Oh, did you catch that! There is no hell for those who eagerly wait for Him. Jesus’ death was not silly! John Dominic Crossan and Rev. Mary Kraus are wrong. There IS a hell and Jesus’ blood – His forgiveness – is the escape . . .