Are Elijah and Moses in the intermediate state?

Are Elijah and Moses in the intermediate state?

Moses and Elijah appear in the New Testament in Matthew 17:3 at the Mount of Transfiguration. They may also be God’s two witnesses during the tribulation in Revelation 11:6. The question this article is concerned with is, “Are Elijah and Moses in the intermediate state?” 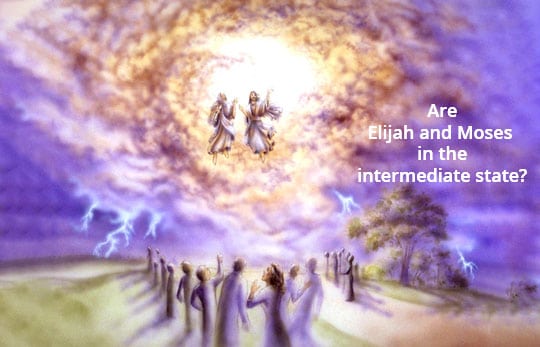 What Is The Intermediate State?

The spirits of unbelievers who have physically died are currently in Hades waiting for the great white throne judgment to occur which is described in Revelation 20:11. The parable of Lazarus (a believer) and the rich man (an unbeliever) illustrates the intermediate state for believers and unbelievers (Luke 16:19-31). Unbelievers will receive their immortal bodies when they are resurrected at the time of the great white throne judgment. Currently, they are disembodied spirits in Hades; that is, they do not have a body. Yet, spirits are real and have life. In Revelation 20:11-15 we discover that the final state of unbelievers is the Lake of Fire.

Then I saw a great white throne and Him who sat upon it, from whose presence earth and heaven fled away, and no place was found for them. And I saw the dead, the great and the small, standing before the throne, and books were opened; and another book was opened, which is the book of life; and the dead were judged from the things which were written in the books, according to their deeds. And the sea gave up the dead which were in it, and death and Hades gave up the dead which were in them; and they were judged, every one of them according to their deeds. Then death and Hades were thrown into the lake of fire. This is the second death, the lake of fire. And if anyone’s name was not found written in the book of life, he was thrown into the lake of fire. Revelation 20:11-15 (NASB)

When unbelievers die, their spirits go to Hades, the intermediate state. At the time of the judgment, they will receive their immortal bodies and be sent to the lake of fire and brimstone (Revelation 20:10). This means that the spirits of unbelievers are not annihilated at physical death and will live forever.

The spirits of believers who have died are currently in paradise or heaven. Once again the parable of Lazarus (a believer) and the rich man (an unbeliever) illustrates the intermediate state for believers and unbelievers (Luke 16:19-31). When Christ was dying on the cross, He told a thief that He would be with the him that day in paradise (Luke 23:43).

Now the resurrection of New Testament saints, believers in Christ or Christians, has not yet occurred. When Jesus told the thief on the cross that he would be in heaven, Christ was referring to the intermediate state for the spirits of believers.

In 1 Corinthians 5:1-3, Paul says that when believers are caught up to the current heaven, they will feel “naked.” He does not mean that believers will be or feel physically exposed. He means that our spirits will not yet have our new, immortal, resurrected bodies.

For indeed in this house we groan, longing to be clothed with our dwelling from heaven, inasmuch as we, having put it on, will not be found naked. 2 Corinthians 5:2-3 (NASB)

Revelation 6:9-11 describes believers in the intermediate state. These believers are in the current heaven during the tribulation period.

When the Lamb broke the fifth seal, I saw underneath the altar the souls of those who had been slain because of the word of God, and because of the testimony which they had maintained; and they cried out with a loud voice, saying, “ How long, O Lord, holy and true, will You refrain from judging and avenging our blood on those who dwell on the earth?” And there was given to each of them a white robe; and they were told that they should rest for a little while longer, until the number of their fellow servants and their brethren who were to be killed even as they had been, would be completed also. Revelation 6:9-11 (NASB)

When believers physically die, their spirits go to the current heaven, the intermediate state.  At the rapture, the believers in Christ will receive their immortal bodies (1 Corinthians 15:51-54; 1 Thessalonians 4:15-17). The believers in Christ will come along with Christ at His second coming (Revelation 19:11-14; 3:5). After the second coming of Christ, the spirits of Old Testament believers will receive immortal bodies (Revelation 20:4. Together both the Old and New Testament believers or saints will reign with Christ during the millennial kingdom (Revelation 5:10). After the kingdom, the present heaven and earth will be destroyed (2 Peter 3:10-12; Revelation 20:11) and a new heaven and earth will be created (Isaiah 65:17; 2 Peter 3:13; Revelation 21:1-2). Revelation 21-22 describes the final state for believers.

Where Are Elijah and Moses?

Where are Elijah and Moses? The answer is Elijah and Moses are in the intermediate state. In Mathew 17:1-3 Elijah and Moses appeared with Christ on the Mount of Transfiguration. This reveals that even though they currently have disembodied spirits, they were recognizable by Peter, James and John.

Many believe that the two witnesses in Revelation 11 are Elijah and Moses. However, the names of the two witnesses are not given to us.  There is a problem with this conclusion since the two witnesses die (Revelation 11:7). This would mean that Moses would die twice. He died on Mount Nebo (Deuteronomy 32:48-52; 34:5-8). Can he die again? If God decided to make that possible, it could happen. It is also suggested that Elijah could be one of the witnesses since he has not yet died (2 Kings 2:11). But Scripture never answers the question for us.

Scripture teaches that every person lives eternally (Matthew 25:46). The parable of Lazarus and the rich man (Luke 16:19-31) teaches us that after we cease living in this life our eternity is already determined. For example, in the parable the rich man asks Abraham to have Lazarus dip his finger in some water, then come to the rich man and drop water on his tongue. But Abraham responded to his request that there is a “great chasm” between those in paradise or heaven and those in Hades so that people cannot cross over (Luke 16:26). This means that once we die our destiny cannot be changed.

In Hebrews 9:27 we are told that judgment will eventually occur.

And inasmuch as it is appointed for men to die once and after this comes judgment . . . Hebrews 9:27 (NASB)

How can unbelievers escape judgment and the lake of fire? The answer is to repent of and seek forgiveness for your sins. Romans 10:9 says,

. . .that if you confess with your mouth Jesus as Lord, and believe in your heart that God raised Him from the dead, you will be saved; 10 for with the heart a person believes, resulting in righteousness, and with the mouth he confesses, resulting in salvation. For the Scripture says, “WHOEVER BELIEVES IN HIM WILL NOT BE DISAPPOINTED.” Romans 10:9-10 (NASB)

For more information about how to be forgiven your sins and go to heaven visit, “Searching For God.”