When are the Old Testament saints resurrected?

When are the Old Testament saints resurrected? 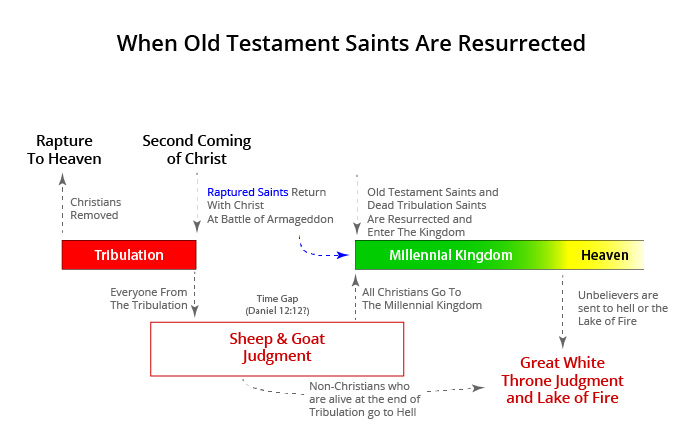 Old Testament Saints Are Not Included In The Rapture

The rapture is described in 1 Thessalonians 4:14-18. In this passage two different groups of believers are described: those who are Christians still living upon the earth and those Christians who have died. The those Christians who had died are referred to as “asleep in Jesus.” The word “asleep” does not mean that they are sleeping in bed. The same word is used of Lazarus who had died a physical death (John 11:11-12). John 11:13-14 tells us that when Christ’s disciples heard Him say Lazarus was asleep, they thought Lazarus was literally sleeping; but then Jesus said he was dead. That is the same meaning of the Greek word used here for “asleep.”

For if we believe that Jesus died and rose again, even so God will bring with Him those who have fallen asleep in Jesus. For this we say to you by the word of the Lord, that we who are alive and remain until the coming of the Lord, will not precede those who have fallen asleep. For the Lord Himself will descend from heaven with a shout, with the voice of the archangel and with the trumpet of God, and the dead in Christ will rise first. Then we who are alive and remain will be caught up together with them in the clouds to meet the Lord in the air, and so we shall always be with the Lord. Therefore comfort one another with these words. 1 Thessalonians 4:14-18 (NASB)

The rapture will occur when the archangel speaks and the dead in Christ rise first and the living Christians will instantly join them in the air and ascend upwards. Therefore, the group that will be raptured are people who have placed their faith in Christ since Jesus died on the cross – both the dead and those still living at the time of the rapture. This resurrection of the dead in Christ does not include the Old Testament saints. At this time all these New Testament Christians will receive their immortal bodies.

Old Testament Saints Are Not Resurrected At The Second Coming

At the Second Coming of Christ, those Christians who were raptured prior to the tribulation will come with Christ. In Revelation 19:9-10 we are told that it is time for the marriage supper of the Lamb. Figuratively speaking, this refers to the wedding party and final union of Christ and the Church.

2 Corinthians 11:2 refers to the church as being betrothed or engaged to Christ in a figurative sense.

For I am jealous for you with a godly jealousy; for I betrothed you to one husband, so that to Christ I might present you as a pure virgin. 2 Corinthians 11:2 (NASB)

The marriage supper occurs during the millennial kingdom. Then in Revelation 21:9 we are told that the wedding is completed. That is, Revelation 19:9-10 is the arrival of the raptured saints. Revelation 19:14 describes these individuals as being holy. Note that Revelation 3:5 is a promise to Christians that they will be clothed in white.

And the armies which are in heaven, clothed in fine linen, white and clean, were following Him on white horses. Revelation 19:14 (NASB)

Old Testament Saints Are Resurrected After The Second Coming

After the defeat of the nations of the world at Armageddon (Revelation 19:16-21), the imprisonment of Satan will occur in Revelation 20:1-3. Revelation 20:4, 6 describes the second and third groups of people who will be resurrected.

Then I saw thrones, and they sat on them, and judgment was given to them. And I saw the souls of those who had been beheaded because of their testimony of Jesus and because of the word of God, and those who had not worshiped the beast or his image, and had not received the mark on their forehead and on their hand; and they came to life and reigned with Christ for a thousand years . . . Blessed and holy is the one who has a part in the first resurrection; over these the second death has no power, but they will be priests of God and of Christ and will reign with Him for a thousand years. Revelation 20:4, 6 (NASB)

Now we ask the question, “Who are the ones sitting on the thrones in the first part of verse 4?” The verse says, “Then I saw thrones, and they sat on them, and judgment was given to them.” But who are these individuals? The answer is these are the Old and New Testament saints. It must include the Old Testament saints since Daniel 7:27 says,

Then the sovereignty, the dominion and the greatness of all the kingdoms under the whole heaven will be given to the people of the saints of the Highest One; His kingdom will be an everlasting kingdom, and all the dominions will serve and obey Him. Daniel 7:27 (NASB)

And there will be a time of distress such as never occurred since there was a nation until that time; and at that time your people, everyone who is found written in the book, will be rescued. And many of those who sleep in the dust of the ground will awake, these to everlasting life, but the others to disgrace and everlasting contempt. (NASB) Daniel 12:1-2

Therefore, the first part of Revelation 20:4 refers to the resurrection of the Old Testament saints.

Tribulation Saints Are Resurrected Next

The next resurrection includes the Christians who died during the tribulation. Notice that we are told next in Revelation 20:4, 6 that those who did not worship the beast and did not receive the mark of the beast will be resurrected. Verse 4 says that they came to life and reigned with Christ for a thousand years. At this point every Old and New Testament believer will have been resurrected.

Everyone Else Is Resurrected After The Universe Is Destroyed

And I saw the dead, the great and the small, standing before the throne, and books were opened; and another book was opened, which is the book of life; and the dead were judged from the things which were written in the books, according to their deeds. And the sea gave up the dead which were in it, and death and Hades gave up the dead which were in them; and they were judged, every one of them according to their deeds. Then death and Hades were thrown into the lake of fire. This is the second death, the lake of fire. And if anyone’s name was not found written in the book of life, he was thrown into the lake of fire. Revelation 20:12-15 (NASB)

Therefore, we have a complete picture of who is resurrected at what time. Revelation 20:4 refers to the time that the Old Testament saints are resurrected. The study Prophecy of The Future describes the future events such as the Rapture, the Tribulation and the millennial kingdom.

Are the Old Testament saints resurrected at the rapture?
When and where does the Goat and Sheep judgment occur?
Why were people resurrected when Jesus died?
Promise of Future Resurrection
Prophecy of The Future
What happened to the saints who were resurrected from the graves?