What happened to the saints who were resurrected from the graves?

What happened to the saints that got up out of the grave after Jesus' resurrection?

The book of Matthew tells us that on the afternoon that Jesus died on a wooden cross, the sun darkened during a full moon, the temple veil was torn from the top to the bottom, and some Old Testament saints came up out their graves. Here is Matthew’s record of this historical event,

And behold, the veil of the temple was torn in two from top to bottom, and the earth shook; and the rocks were split, and the tombs were opened; and many bodies of the saints who had fallen asleep were raised; and coming out of the tombs after His resurrection they entered the holy city and appeared to many. Matthew 27:51-53 (NASB) 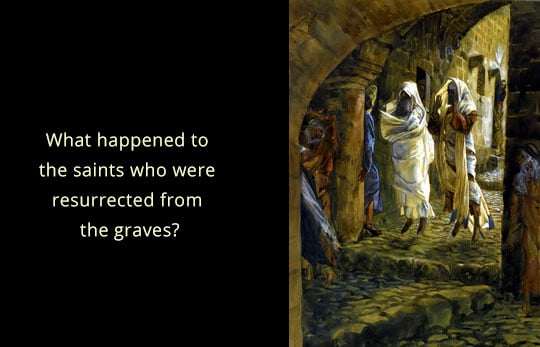 What Happened To These Saints?

What did they do? What happened to them? These are questions that many have asked, but Matthew gives us very little information. Matthew tells us that they entered the holy city, and many people saw them. They may have had immortal bodies. Remember that Jesus’ new immortal body was recognized by the apostles after He opened their understanding (Matthew 28:10-11; Luke 24:14-16, 31). Therefore these saints may have also been recognized, but we cannot be dogmatic. Just imagine that someone saw a friend who had died years ago. Maybe a mother saw her dead son or a wife saw her deceased husband. This must have been a very emotional surprise and shock to many people in Jerusalem. They had to know that it was connected to Jesus’ death and resurrection. Most likely these resurrected saints did not remain on the earth very long since the New Testament does not refer to them again. This was a pre-rapture event.

Why did this occur? Why shock people with men, women, and children who were once dead but are now alive and walking around? I believe God was making a point. I cannot help  but think that these people had believed in Jesus and had came to life to tell others about Him. This displays God’s great love for us. He is seeking to save the elect and wants us to believe in Him. Learn more about how to believe in Him on the page Searching for God.

Are there historical facts about the cross?
Was Jesus nailed to the cross to fulfill ancient prophecy?
When Jesus was on the cross he said, “Father, why have you forsaken me?”
Why was wine vinegar or sour wine given to Christ on the cross?
Why did the soldier pierce Jesus’ side with the sword?
Were the sins of the world placed on Jesus or in Him at death?