Will Christians be greater than angels in the future?

Will Christians be greater than angels in the future?

There is great interest among Christians and non-Christians about angels. Since angels are part of the invisible world (Colossians 1:16), we cannot see them or knowingly speak with them. However, Hebrews 13:2 says that it is possible to unknowingly entertain angels. Therefore, we can thank God that He has revealed much about angels in the pages of Scripture. It is important to remember that there are two types of “Angels – Good and Evil.” The main difference between these two groups is that one group is holy and the other is evil.  A series of links is provided at the end of the study about angels that should be helpful for those desiring to know more. In this Q&A the question that we answer is, “Will Christians be greater than angels in heaven?” 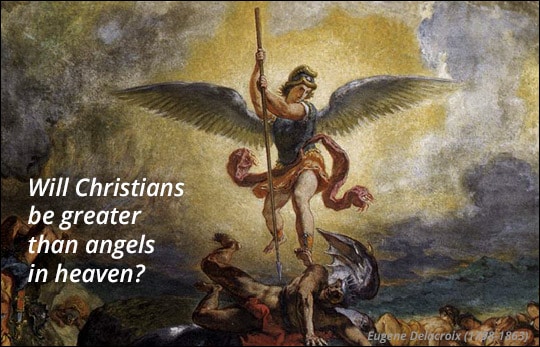 People Are Lower Than The Angels

But one has testified somewhere, saying,
WHAT IS MAN, THAT YOU REMEMBER HIM?
OR THE SON OF MAN, THAT YOU ARE CONCERNED ABOUT HIM?

YOU HAVE MADE HIM FOR A LITTLE WHILE LOWER THAN THE ANGELS;
YOU HAVE CROWNED HIM WITH GLORY AND HONOR,
AND HAVE APPOINTED HIM OVER THE WORKS OF YOUR HANDS;
YOU HAVE PUT ALL THINGS IN SUBJECTION UNDER HIS FEET.”

For in subjecting all things to him, He left nothing that is not subject to him. But now we do not yet see all things subjected to him.

But we do see Him who was made for a little while lower than the angels, namely, Jesus, because of the suffering of death crowned with glory and honor, so that by the grace of God He might taste death for everyone. Hebrews 2:6-9 (NASB)

We discover the same message in 2 Peter 2:11 when the apostle Peter speaks of false teachers who think that they are superior to angels. Peter warns Christians to not revile angels. In this verse we are told that angels have greater abilities and power.

Daring, self-willed, they do not tremble when they revile angelic majesties, whereas angels who are greater in might and power do not bring a reviling judgment against them before the Lord. 2 Peter 2:10-11 (NASB)

Angels are superior to humans! This means that every man, woman and child are not just inherently lower than both the holy and evil angels, but they are vastly inferior in what they can do.

Does Luke 20:36 Say That People Are Equal To Angels?

Therefore, the correct understanding of Luke 20:36 is that Christians will be equal to or like the angels in the sense that they will not be married in heaven.

Christians Will Be Higher Than The Angels

1 Corinthians 6:3 reveals that in the millennial kingdom (1,000 year kingdom), Christians will have a higher rank than angels since they will judge angels.

Do you not know that we will judge angels? How much more matters of this life?  1 Corinthians 6:3  (NASB)

The saints of the ages will judge the angels. But this does not mean that Christians will have greater might, power and other capabilities than angels have. Further Hebrews 1:14 does not reveal that Christians are superior to angels. It only states that the angels minister to Christians. If those who serve others are inferior to the ones who are being served, then Christ would be inferior to every Christian because Christ said,

Which angels will Christians judge? The answer is not the holy angels. The answer must be that Christians will judge the evil angels who joined Satan in rebellion as described in Isaiah 14:12-15; Ezekiel 28:12-18; Luke 10:18 and Revelation 12:4.

Scripture teaches that angels are superior to every human on the planet (Hebrews 2:6-9). In the millennial kingdom angels will be judged by Christians, but that does not mean angels will be inferior to Christians in power and capability. In heaven Christians will be superior in rank since they are adopted into the family of God.

Angels – Good and Evil
Are there female angels?
Are we equal, lower, or higher than the angels?
Where do the scriptures teach that angels are not given in marriage?
Do angels have a will?
Invisible Angelic Powers
Are human beings the highest part of God’s creation?