Does the Bible say there are male and female angels?

When we think about angels, should we relate them to gender? Are there male and female angels? When the two angels visited Lot (Genesis 19), can we be sure they were in human form and if they were of male gender?

It is sad that almost every painting, photograph, sculpture and image of angels presents angels as females. Sometime the angels are semi-clothed or naked. Such angels, if they existed would be evil angels. The Bible never states that female angels exist, or that angels have gender. In fact, Scripture always refers to angels with male names. But this does not mean that the angels were males. In God’s master design, the male gender has the leadership in the home, society, and the church. It is most likely that angels have male names to indicate that they have authority as God’s representatives. 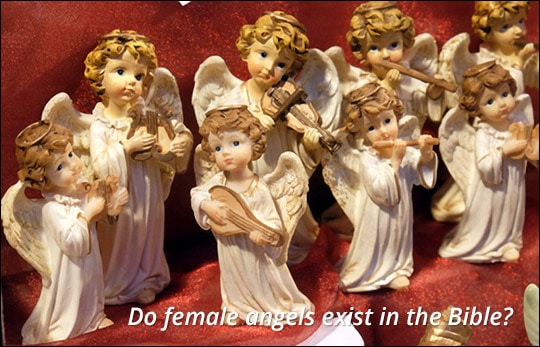 Angels Are Not Given In Marriage

Some teachers quote Matthew 22:30 as proof that angels cannot marry and are sexless.

For in the resurrection they neither marry nor are given in marriage, but are like angels in heaven. (NASB) Matthew 22:30

But the verse only says that angels do not marry in heaven. Scripture never tells us if angels are males or females.

Some believe that another passage indicates that angels have gender. Genesis 6:1-2 tells us that the “sons of God” took wives from among women.

Now it came about, when men began to multiply on the face of the land, and daughters were born to them, that the sons of God saw that the daughters of men were beautiful; and they took wives for themselves, whomever they chose. (NASB) Genesis 6:1-2

The phrase “sons of God” appears to refer to angels (Job 1:6; 2:1). We also see a reference in Jude to this event in Genesis but there is no statement that the angels had gender.

And angels who did not keep their own domain, but abandoned their proper abode, He has kept in eternal bonds under darkness for the judgment of the great day, just as Sodom and Gomorrah and the cities around them, since they in the same way as these indulged in gross immorality and went after strange flesh, are exhibited as an example in undergoing the punishment of eternal fire. (NASB) Jude 1:6-7

For if God did not spare angels when they sinned, but cast them into hell and committed them to pits of darkness, reserved for judgment; and did not spare the ancient world, but preserved Noah, a preacher of righteousness . . . (NASB) 2 Peter 2:4-5

These angels sinned and were cast into an abyss as their punishment.

The Bible never tells us that angels have male or female genitals. Yet, in some way angels were able to make human women pregnant. How can this happen? The Bible never says. This topic has been debated by many. It is not an unimportant one. The admonition in 2 Timothy is an important one to remember.

But refuse foolish and ignorant speculations, knowing that they produce quarrels. (NASB) 2 Timothy 2:23

God’s angels are His ministers who do His bidding. Those who do not are punished.

Angels – Good and Evil
Will Christians be greater than angels in the future?
Are we equal, lower, or higher than the angels?
Where do the scriptures teach that angels are not given in marriage?
Do angels have a will?
Invisible Angelic Powers