Why is Dan missing in Revelation 7 but not in Ezekiel 48?

Both the books of Ezekiel and Revelation allude to the 12 tribes of Israel in a future context, perhaps in the millennial period. However while Ezekiel mentions the tribe of Dan in consistency with the Torah, the book of Revelation omits it entirely instead merging the half tribes of Mannaseh and Ephraim back into Joseph and surprisingly lists the tribe of Levi in the place of Dan. Please explain this difference.

Revelation 6-19 describes the future seven year tribulation period that will occur when a peace treaty is signed promising the nation of Israel peace and safety (Daniel 9:27; 1 Thessalonians 5:3). Revelation 20:4-6 describes the millennial kingdom that will follow, and Revelation 21-22 describes the future eternal state (the future heaven). Ezekiel 38-39 describes the battle of Armageddon that will occur at the end of the tribulation and chapters 40-48 give us more information about the millennial kingdom. But something is obvious when the two books are compared. The tribe of Dan does not appear in Revelation 7:4-8 but it appears in Ezekiel 48. Why is the tribe of Dan not mentioned during the tribulation but is mentioned during the millennium? The purpose of this brief study is to explain the reason why this happened. 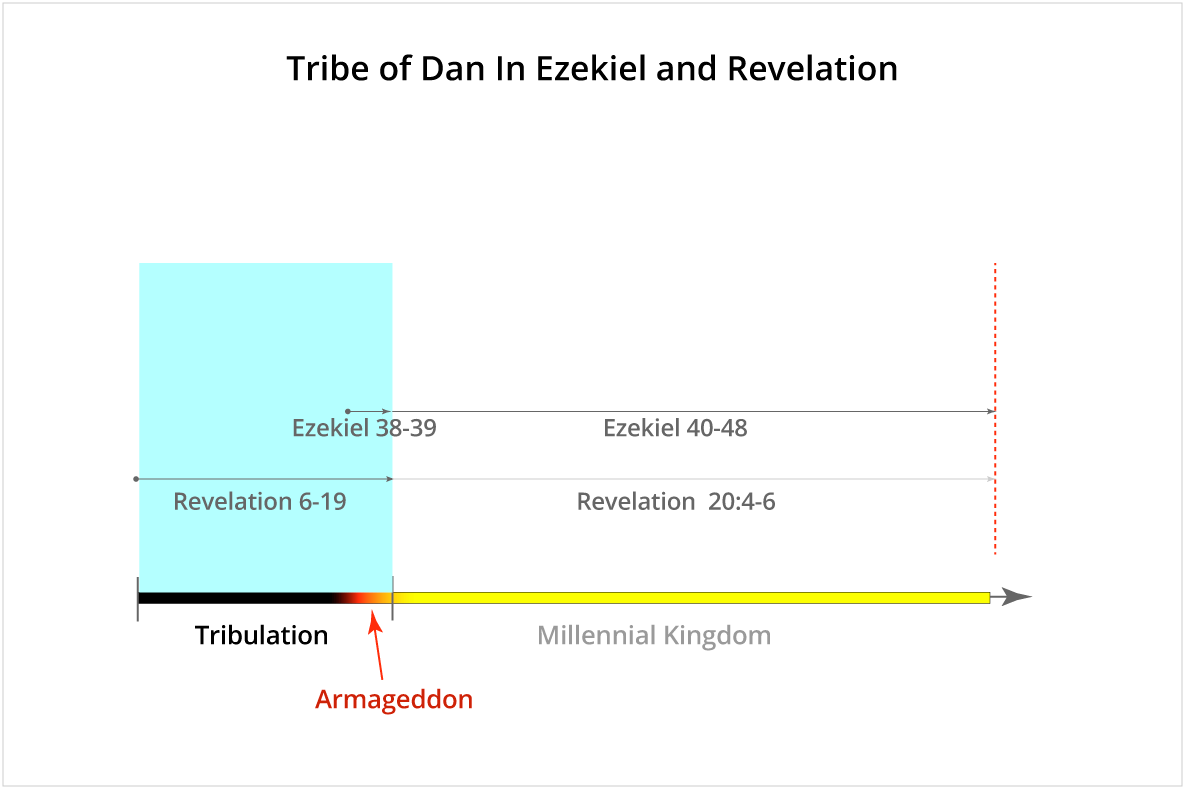 There is a divine principle that is obvious throughout Scripture. When a man or woman spiritually disqualifies himself or herself, God is not honored and his or her ministry is an abomination to the Lord. One notable example is Moses. He disqualified himself.  God “fired him” from serving as the leader and minister of the nation of Israel. Then God appointed Joshua to lead Israel into the Promised Land (Numbers 20:12; 27:14; Deuteronomy 3:23-28; 32:51).

The sons of Samuel, Hophni and Phinehas (1 Samuel  2:22-36) were two priests who disqualified themselves by committing sexual sins with  women.  God then took their lives. King Saul disqualified himself by disobedience and by lying to God (1 Samuel 15:20-23). As a result, God removed him from being king of Israel and appointed David. The nation of Israel was defeated and captured by both the Assyrian and Babylonian empires because Israel abandoned God and worshiped other gods (Daniel 9:4-19).

After Judah returned to the Promised Land, the priests were rebuked for their hypocritical spirit (Malachi 1:6-14) and because they distorted the Word of God (Malachi 2:1-9). After Christ’s resurrection, God established a list of qualifications for the church leaders  called elders and deacons (1 Timothy 3:1-13; Titus 1:5-9). Any proven violation of the qualifications disqualified the man from continuing to serve in office.

So far we have been examining how God has dealt with men who disqualified themselves from ministry due to sin. This last example demonstrates that God also punishes nations which sin. In Luke 21:20-24 Jesus prophesied the future destruction of the nation of Israel  because they had rejected Him. This occurred in A.D. 70 when  the Roman army defeated Israel and utterly annihilated the Jewish nation.

Now when we examine Revelation 7:4-8, we discover that all of the tribes of Israel will be witnesses for God during the seven year tribulation period (Daniel 9:27; Matthew 24:15), except for the tribe of Dan. Why will Dan be excluded from being His witness to the world during the tribulation? The answer appears to be that the tribe of Dan turned apostate. As a result, the nation was taken captive by the Assyrian army ( Judges 18:30; 1 Kings 12:28-30; 2 Kings 10:29). They continue to reject Christ in the tribulation.

Ezekiel 48 – All of Dan Becomes Righteous

At the end of the tribulation perod, their situation will change at the second coming of Christ when He comes to defeat the armies of the nations of the world at the battle of Armageddon. Zechariah 12:10-14 says that when the nation of Israel sees Christ, at that moment God will pour out the Holy Spirit over Israel and they will realize that they had rejected Christ and will repent of their sin. Romans 11:25-26 teaches us that all of the Israelites who are alive will repent. Therefore, the tribe of Dan will also repent and become believers in Christ. After the Sheep and Goat judgment, Christ will establish His millennial kingdom.

Ezekiel 48:1-2, 32 teaches that during the millennial kingdom, which follows the Sheep and Goat judgment, Dan will be given their allotted portion of land in the Promised Land. Notice that Ezekiel 48 describes the land assignments for the different tribes.  Dan is the first tribe. God gives the tribe of Dan first place in the land assignment.

Ezekiel 48:1-2 reveals that God will keep His promise and Dan is included in His promises. God promised the nation of Israel the Promised Land.  The tribe of Dan was promised a portion of that land. They will finally inherit it in the millennial kingdom!

The tribe’s apostasy is also a sad reminder that God seeks godly men as His ministers. Those who fail will be disqualified and will not have His blessing for ministry. The apostle Paul was fearful of being disqualified and he strived to not be disqualified (1 Corinthians 9:27; 2 Timothy 4:6-8). If you are a pastor or leader involved in ministry in a church, are you striving to never be disqualified?

Why is the tribe of Dan not among the 144,000 in Revelation 7:4-8?
What does the Bible say about the idolatrous tribe of Dan?
Did the tribe of Dan move? Does Judges 18:1 contradict Joshua 19:48?
What are the 7 seals, 7 trumpets, 7 signs and 7 bowls of Revelation? — The Tribulation
When and where does the Goat and Sheep judgment occur?
Is there a difference between a church leader and a spiritual leader in the church?
What does a Christian do when their pastor sins?
How do you approach your pastor if he is teaching error?