A quick comparison of Judges 18:1 to Joshua 19:40-48 leaves the impression that the two passages are contradictory. However, there is no contradiction as a careful examination of scripture will prove.

Joshua 19:40-48 – Original Territory Given the Danites

Joshua 19:40 tells us that the tribe of Dan was the seventh tribe allowed to choose their territory. The territory is described in Joshua 19:41-47. Verse 48 gives us this report.

This was the inheritance of the tribe of the sons of Dan according to their families, these cities with their villages. Joshua 19:48 (NASB)

Judges 1:34-35 – Tribe of Dan Could Not Occupying Territory

Joshua 1:34-35 reveals that the tribe of Dan was not able to fully occupy their territory due to the Amorites .

Then the Amorites forced the sons of Dan into the hill country, for they did not allow them to come down to the valley, yet the Amorites persisted in living in Mount Heres, in Aijalon and in Shaalbim; but when the power of the house of Joseph grew strong, they became forced labor. Judges 1:34-35 (NASB)

The following quotes help us understand what happened to the tribe of Dan.

The plight of the tribe of Dan was first mentioned in [Judges] 1:34-35, where the Amorites prevented the Danites from taking possession of their inheritance. Caught in a squeeze between the Amorites and the Philistines to the west and the territory of Judah to the south, the Danites sought out a new homeland. They clearly felt that the boundary lines had not fallen for them “in pleasant places” (Ps. 16:6). Their desire to move revealed a lack of faith in the Lord who had allowed to them their original territory.[1]

So although land had been allotted to them, it had not fallen to them in the sense of fully becoming theirs, and their hold on the part of it they had managed to occupy became increasingly tenuous over time.[2]

The Danites were quite unable to occupy the territory located to them (Jos. 19:41-46) due to the opposition of the Amorites and pressure from the Philistines. Pressed up into the hill-country, they were confined to a very small area in the region of Zorah and Eshtaol . . .[3] 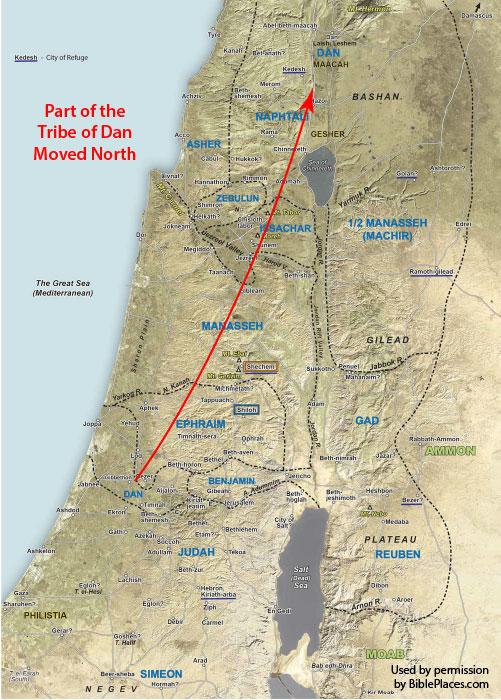 Since the tribe of Dan could not fully occupy their allotted territory, due to their lack of faith and holiness, the tribe of Dan looked for new territory. Judges 18:1-31 describes their move to the north and the establishment of the city called Dan.

The tribe of Dan is like some Christians who have been blessed with “every spiritual blessing in the heavenly places in Christ” (Ephesians 1:3). We have blessings in this life and not just in the future. That is also the message of 2 Peter 1:2-3.

Grace and peace be multiplied to you in the knowledge of God and of Jesus our Lord; seeing that His divine power has granted to us everything pertaining to life and godliness, through the true knowledge of Him who called us  by His own glory and  excellence. 2 Peter 1:2-3 (NASB)

Yet, many Christians struggle and complain, which is a sin (James 5:9). But we do not need to complain and be upset. 2 Peter 1:2-3 says Christians have been given everything related to life and godliness. We need to ask God to give us wisdom to understand how to appropriate our blessings.

What does the Bible say about the tribe of Dan?