Why did Eve believe the serpent’s lies and eat the apple?

Why was Eve so stupid to believe the devil's lies, eat the fruit and sin?

Have you ever wondered why Eve ate from the Tree of the Knowledge of Good and Evil? Why did Eve believe the devil’s lies? Was Eve responsible for the sin that entered the world? The answers to these questions are given below. 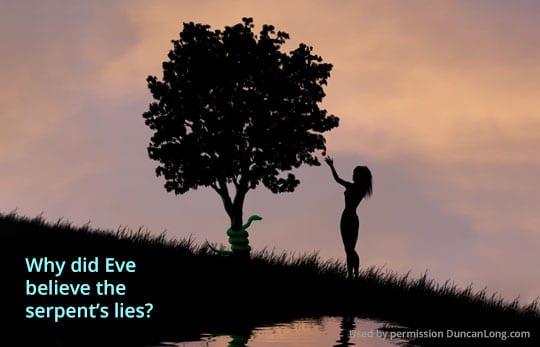 Eve Sinned By Eating The Fruit

Genesis 3:1-5 describes the discussion that occurred between Satan and Eve that eventually resulted in her eating from the fruit of the Tree of the Knowledge of Good and Evil. For an explanation of what happened you are encouraged to listen to the study, “The Fall and Its Tragedy, part 1.”  But here are a few highlights of what happened.

In Genesis 3:1 we are told that Satan approached Eve and said,

Indeed, has God said, “You shall not eat from any tree of the garden?” Genesis 3:1 (NASB)

His statement was a lie because in Genesis 2:16-17 we are told that God had said they could eat from any of the trees in the Garden of Eden except for one, the Tree of the Knowledge of Good and Evil.

The LORD God commanded the man, saying, “From any tree of the garden you may eat freely; but from the tree of the knowledge of good and evil you shall not eat, for in the day that you eat from it you will surely die.” Genesis 2:16-17 (NASB)

This means that Satan lied or was deceptive. Then Eve replied that they could eat from all of the trees, except for one.

Then Satan called God a liar.

The serpent said to the woman, “You surely will not die! For God knows that in the day you eat from it your eyes will be opened, and you will be like God, knowing good and evil.” Genesis 3:4-5 (NASB)

As a result, Eve looked at the fruit on the tree and somehow she knew the fruit would make her wise.

When the woman saw that the tree was good for food, and that it was a delight to the eyes, and that the tree was desirable to make one wise, she took from its fruit and ate; and she gave also to her husband with her, and he ate. Then the eyes of both of them were opened, and they knew that they were naked; and they sewed fig leaves together and made themselves loin coverings. Genesis 3:6-7 (NASB)

After eating the fruit, she discovered that the fruit tasted wonderful. Note that the Bible never tells us that the fruit was an apple. We do not know what type of fruit was on this tree, since Genesis 3:24 says that God prevented Adam and Eve from eating again from the tree and also from the Tree of Life.  As a result, no one was able to eat of the tree and apparently the tree was destroyed in the flood in Genesis 8-9. Today, the tree does not exist on earth.

After Adam ate the fruit, sin entered the creation and they became sinners. Yes, they knew good and evil because now they had committed sin and knew it by experience. Also, their sin nature was passed on to their children and every subsequent descendant.

Therefore, just as through one man sin entered into the world, and death through sin, and so death spread to all men, because all sinned . . . Romans 5:12 (NASB)

Eve did not cause sin to enter the world. Sin entered the world when Adam sinned because God has assigned the responsibility of leadership to husbands in the marital  relationship. When Adam sinned everyone sinned (Romans 5:12), because he held the responsibility to lead. However, Eve motivated him to sin! For more information listen to the study, “When Adam Sinned Everyone Died.”

Why did Eve believe the devil’s lies? Scripture says Satan deceived Eve by being crafty.

But I am afraid that, as the serpent deceived Eve by his craftiness, your minds will be led astray from the simplicity and purity of devotion to Christ.  2 Corinthians 11:3 (NASB)

The Greek for crafty is panourgia. It can be translated as “tricky.” Satan was brilliant. He was correct. He knew Eve would know that the fruit would make her wise. He motivated her to investigate the tree. He implied that God did not want her to be His equal. That communicated that the fruit was very important. He caused Eve to think about the benefits of the fruit and to forget about the consequence of disobedience.

1 Timothy 2:13-14 repeats that Eve was deceived in that she did not understand that she was sinning when she ate the fruit. She was not only deceived; she did not stop to consider what she was doing.

For it was Adam who was first created, and then Eve. And it was not Adam who was deceived, but the woman being deceived, fell into transgression. 1 Timothy 2:13-14 (NASB)

That is exactly what happens to all Christians today. Why was she as “stupid” as we are?  We are as foolish as Eve. God says not to sin, but we want to and so we do and then we suffer God’s discipline.

Do you sin? If so, why? We either heed God’s warning in Galatians 6:7-8 where He says do not be deceived or we suffer the consequences. We cannot deceive God. God knows exactly what we do.

Let no one say when he is tempted, “I am being tempted by God”; for God cannot be tempted by evil, and He Himself does not tempt anyone. But each one is tempted when he is carried away and enticed by his own lust. Then when lust has conceived, it gives birth to sin; and when sin is accomplished, it brings forth death. Do not be deceived, my beloved brethren. James 1:13-16 (NASB)

When we give in to our passions to “eat the fruit” of whatever temptation applies to us, we sin and disobey God by our action. Then Hebrews 12:4-11 warns us that God will discipline. Yet, sin entices us. It appeals to us and we focus on the pleasure of the sin and then we get punished.

God urges us to be holy, as He is holy.

In 1 Peter 3:8-12 we discover that He promises blessing to those who do.