When were Mary and Joseph married?

When were Mary and Joseph married?

The first of two passages in the New Testament that give us a clue as to the timing of the marriage of Mary and Joseph are found in Luke.

And everyone was on his way to register for the census, each to his own city. Joseph also went up from Galilee, from the city of Nazareth, to Judea, to the city of David which is called Bethlehem, because he was of the house and family of David, in order to register along with Mary, who was engaged to him, and was with child. Luke 2:3-5 (NASB) 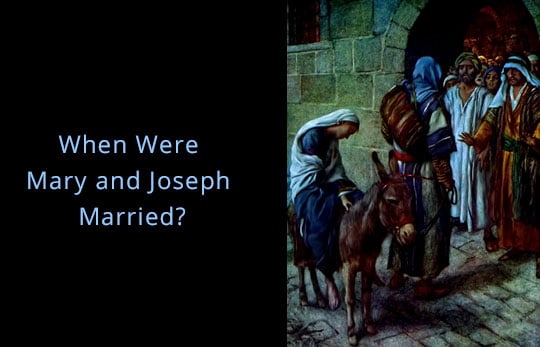 Here we are told that Mary and Joseph were still engaged to be married when they made their trip to Bethlehem. According to Jewish law, a couple was not considered married until they had sexual intercourse.

Matthew 1:24-25 is the second passage about their engagement. Here we discover that the couple did not have sexual intercourse until after Jesus was born.

And Joseph awoke from his sleep and did as the angel of the Lord commanded him, and took Mary as his wife, but kept her a virgin until she gave birth to a Son; and he called His name Jesus. Matthew 1:24-25 (NASB)

This means that they were married, including a wedding ceremony, and then had sexual intercourse sometime after Jesus was born. According to Jewish custom a couple was technically married until they consummated the marriage. For a description of a Jewish wedding visit Wedding At Cana. The most recent information about the timing of Jesus’ birth suggests that He was probably born about 2 B.C.

Therefore, May and Joseph were probably married about 2 B.C. after Christ was born.