What ever happened to Herodias and Salome? – Who were they?

Whatever happened to Herodias and Salome?

. . . when Herod had John arrested, he bound him and put him in prison because of Herodias, the wife of his brother Philip. For John had been saying to him, “It is not lawful for you to have her.” Although Herod wanted to put him to death, he feared the crowd, because they regarded John as a prophet. But when Herod’s birthday came, the daughter of Herodias danced before them and pleased Herod, so much that he promised with an oath to give her whatever she asked. Having been prompted by her mother, she said, “Give me here on a platter the head of John the Baptist.” Although he was grieved, the king commanded it to be given because of his oaths, and because of his dinner guests. He sent and had John beheaded in the prison. Matthew 14:3-10 (NASB)

The passage tells us that Herod was having an affair with his brother’s wife. In  The Antiquities of the Jews, Flavius Josephus says that Herodias divorced her husband Philip for Herod, who was still married to his first wife.[2] Therefore, when John the Baptist told Herod that he was sinning, Herod did not like the message and eventually put John in prison. 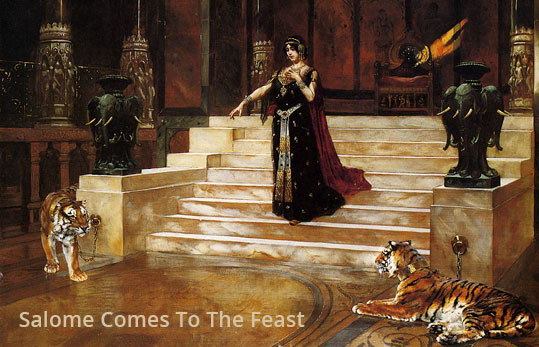 Who was the young woman, the daughter of Herodias, who danced before Herod? Josephus tells us her name was Salome.[3] She later became the wife of Philip whom her mother had divorced.

. . . but Herodias, their sister, was married to Herod [Philip], the son of Herod the Great, who was born of Mariamne, the daughter of Simon the high priest, who had a daughter, Salome; after whose birth Herodias took upon her to confound the laws of our country, and divorce herself from her husband while he was alive, and was married to Herod [Antipas], her husband’s brother by the father’s side; he was tetrarch of Galilee; but her daughter Salome was married to Philip, the son of Herod, and tetrarch of Trachonitis . . .[4]

Flavius Josephus adds that Herodias joined Herod Antipas in exile after Herod lost his kingdom and was banished to Vienna.

Now this [concerning Herod the tetrarch] is attested to, not only by the book of the holy Gospels, but by Josephus, that lover of truth; who also makes mention of Herodias his brother’s wife, whom Herod had taken away from him while he was alive, and married her; having divorced his former lawful wife, who was the daughter of Aretas, king of the Petrean Arabians. This Herodias he had married, and lived with her; on which account also, when he had slain John [the Baptist], he made war with Aretas, because his daughter had been dishonorably used; in which war he relates that all Herod’s army was destroyed, and that he suffered this on account of the most unjust slaughter of John. He also adds, that John was a most righteous man. Moreover, he makes mention of his baptism, agreeing in all points thereto relating with the Gospel. He also informs us, that Herod lost his kingdom on account of Herodias, with whom also he was condemned to be banished to Vienna, which was their place of exile, and a city bordering upon Gaul, and lying near the utmost bounds of the west.[5]

Herod had been defeated in battle and was exiled by Aretas. Salome also reportedly decided to join Herod and Herodias in exile rather than be alone. Dexter reports that they were sent to Gaul initially and then to Ilerda in Spain. As Salome was passing over a frozen river, the ice broke and she sank in up to her neck and died.

Wherefore the just vengeance of God burned against all who were concerned in this crime. Herod was defeated by Aretas. Afterwards he was banished with Herodias to Lyons, and deprived of his tetrarchy and everything by Caligula, at the instigation of Agrippa, the brother of Herodias, as Josephus relates (xvii. 10). Moreover, the head of the dancing daughter was cut off by means of ice. Hear what Nicephorus says, “As she was journeying once in the winter-time, and a frozen river had to be crossed on foot, the ice broke beneath her, not without the providence of God. Straightway she sank down up to her neck. This made her dance and wriggle about with all the lower parts of her body, not on land, but in the water. Her wicked head was glazed with ice, and at length severed from her body by the sharp edges, not of iron, but of the frozen water. Thus in the very ice she displayed the dance of death, and furnished a spectacle to all who beheld it, which brought to mind what she had done.” Hear also L. Dexter (in Chron. A. C. 34), “Herod Antipas, with Herodias his incestuous mistress, was banished first to Gaul, and afterwards to Ilerda in Spain. Herodias dancing upon the river Sicoris when it was frozen, fell through the ice, and perished miserably.”[6]

Did this occur because of their sin?

Do not be deceived, God is not mocked; for whatever a man sows, this he will also reap. Galatians 6:7 (NASB)

But God’s forgiveness can restore an individual  into a loving relationship with Him. That is the message of John 3:16 and 1 John 1:9.