What do most reformed theologians teach about the future? — Amillennialism and Premillennialism

Postmillennialism is not very popular today as it once was because postmillennialists teach that the world will get better and better with time. They believe the world will continue to improve until the world turns into God’s kingdom – heaven. Then Christ will come. This view was very popular in the 1800s but when the catastrophes of World War I and World War II occurred and Christians began to realize the world was getting not better but worse, many changed their views and postmillennialism lost its appeal. Those who do hold to this view do not believe in a tribulation or a literal 1,000 year kingdom.

Amillennialists also reject a seven year tribulation and a literal 1,000 year, earthly kingdom. However, they do believe the world will get worse and worse with time. Eventually, Christ will come, defeat the nations of the world, judge the living and the dead and usher in the eternal kingdom of heaven.

Premillennialism teaches that the world will become worse with time just as amillennialism. Eventually, a time of severe tribulation will come, a seven year period, followed by a literal 1,000 year, earthly kingdom. They believe that at the end of the kingdom after a brief conflict, the living and the dead will be judged. This will be followed by the kingdom. 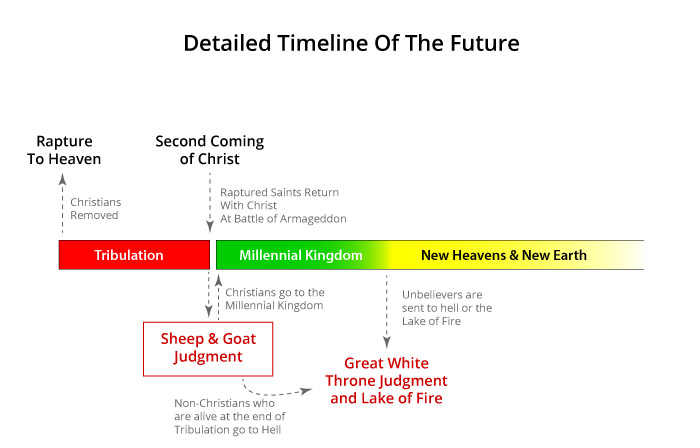 Both amillennialist and premillennialist believe the world is getting worse. That was the message of Jesus. He prophesied that wickedness and violence would increase with time in Matthew 24:12-14.

Because lawlessness is increased, most people’s love will grow cold. But the one who endures to the end, he will be saved. This gospel of the kingdom shall be preached in the whole world as a testimony to all the nations, and then the end will come. Matthew 24:12-14 (NASB)

The amillennialists believe the church has existed since Genesis 3:15 and that the church will continue on earth until heaven and earth are destroyed. They believe in a principle of “continuity” – that nothing spiritually new occurs. They do not believe the church started at Pentecost, since that would be something new. They reject the idea of a rapture since that would mean the church would disappear with no one left to preach the gospel. Consequently, they do not believe in a tribulation or in a rapture. When they come to the book of Revelation, they cannot interpret it literally since they reject the references to 42 months or 1,260 days or “time, times and half-time” (a 3.5 year period of the tribulation (Rev. 11:2; 12:6, 14; 13:5) spoken of in Daniel (Dan. 7:25; 9:27; 12:7). So they also reject a literal 1,000 year kingdom spoken of in Rev. 20:2, 5.

Premillennialists accept scripture literally, except when it is obvious that Scripture contains poetry, parables or symbols. The amillennialist will claim that he reads and understands scripture literally, too, but he admits that his understanding is filtered by his principle of “continuity.” To make his system work, an amillennialist must treat most prophetic portions of scripture symbolically. He picks and chooses which parts he considers to be literal. So he finds difficulty in understanding major positions of Isaiah, Jeremiah, Ezekiel, almost all of the minor prophets, and much of the New Testament literally. He will reinterpret many of the parables and a large number of prophetic passages in the New Testament and threat them as historical. He must treat many portions of scripture symbolically to make his view work.

Prophecy of The Future
Is heaven described in the book of Revelation?
How many kingdoms are there in the Bible?
When and where does the Goat and Sheep judgment occur?
What is the Battle of Armageddon? Which nations will be there?