Must a person repent in order to go to heaven?

Must a person repent in order to go to heaven?

Here is a question to think about. If you thought that you had never done anything wrong, would you ask God to forgive you? That is, why ask for forgiveness if you have a positive view of yourself? If you think you are going to heaven, why change your behavior? These questions help us understand that no one will repent unless they realize that they have a need to repent. 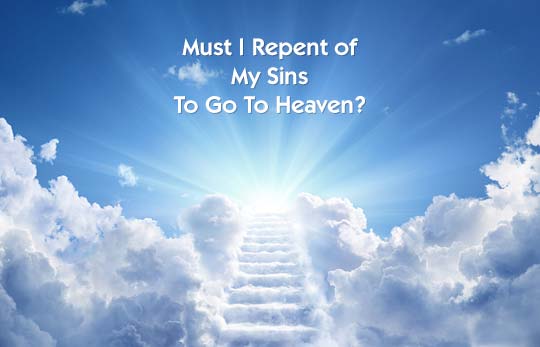 Only Those Who Know They Are Sinners Will Repent

Two men went up into the temple to pray, one a Pharisee and the other a tax collector. The Pharisee, standing by himself, prayed thus: “God, I thank you that I am not like other men, extortioners, unjust, adulterers, or even like this tax collector.  I fast twice a week;  I give tithes of all that I get.” But the tax collector, standing far off, would not even lift up his eyes to heaven, but beat his breast, saying, “God, be merciful to me, a sinner!” I tell you, this man went down to his house justified, rather than the other. For everyone who exalts himself will be humbled, but the one who humbles himself will be exalted. Luke 18:10-14 (NASB)

In this illustration, the Pharisee is an example of one who will never repent. However, the tax collector is the perfect example of repentance. He saw his sin and begs to be forgiven.

Notice at the end of the illustration Jesus said the man who humbled himself would be justified and exalted. To be justified means that a person is declared to be righteous. That is, God will treat you as if you never did anything wrong. For a better understanding of justification, visit “How can Christians be declared righteous since they sin?”

Romans 3:23 tells us that everyone has sinned.

The verse also tells us that we must accept His gift in order to be saved. We must obtain eternal life. Eternal life is the opposite of eternal condemnation or fiery punishment.

We Must Repent to Avoid Punishment

But both man and beast must be covered with sackcloth; and let men call on God earnestly that each may turn from his wicked way and from the violence which is in his hands. Jonah 3:8 (NASB)

Both Matthew 12:41 and Jonah 3:8 help us understand that repentance occurs when a person turns  away from evil. The Q&A “What is the meaning of the word repentance in the Bible?”  teaches that repentance occurs when we understand our sin, grieve what we have done, and turn away from sin. That is what the Ninevites did. Remember the question? If you thought that you had never done anything wrong, would you ask God to forgive you? Why would people repent if they thought that they were good?

Sinners Who Repent Go To Heaven

The following verses reveal that only those who believe in Christ, repent of their sins, and submit to Him will escape eternal punishment.

Then He opened their minds to understand the Scriptures, and He said to them, “Thus it is written, that the Christ would suffer and rise again from the dead the third day, and that repentance for forgiveness of sins would be proclaimed in His name to all the nations, beginning from Jerusalem. You are witnesses of these things.”  Luke 24:45-48 (NASB)

Jesus is speaking, and He reminds us that one must believe that He died and returned to life in order to be saved from eternal punishment. But notice that repentance is also required. Remember the question? If you thought that you had never done anything wrong, would you ask God to forgive you? Why would a person repent if he or she thought that they were a good person? Only those who understand they are sinners and mourn their sins will seek God and ask to be forgiven. Repentance does not help a person earn salvation or help someone go to heaven. Repentance is a necessary condition and desire within the person that motivates them to seek God. Repentance is a gift from God and not a work (Acts 11:8; 2 Timothy 2:25).

Well then, God has granted to the Gentiles also the repentance that leads to life. Acts 11:18 (NASB)

Someone who sees no need to be different will ever come to God. Repentance is necessary for a person to be saved.

I tell you, no, but unless you repent, you will all likewise perish. Luke 13:3 (NASB)

They went out and preached that men should repent. Mark 6:12 (NASB)

I have not come to call the righteous but sinners to repentance. Luke 5:32 (NASB)

How To Be Saved

In order for a person to be rescued from their sins and go to heaven, a person must believe in Jesus Christ.

In this verse we are told that a person who believes in Christ will 1) not perish and 2) have eternal life. Notice the two promises in this verse. First, a Christian escapes punishment, and second, he or she goes to heaven. God performs a rescue operation.

However, 2 Corinthians 7:10 teaches us that repentance will motivate a person to want to want to be saved.

For the sorrow that is according to the will of God produces a repentance without regret, leading to salvation, but the sorrow of the world produces death. 2 Corinthians 7:10 (NASB)

Repentance motivates us to desire eternal life. It is God’s gift of eternal life through Jesus Christ that leads us to repent (Romans 2:4).

Repentance occurs when a person believes in Christ: that He is God who died for our sins and that His physical body returned to life. This is the message of John 3:16 above and the message of 1 Corinthians 15:3-7.

When a person 1) believes Christ’s work on the cross and 2) understands he or she is headed for eternal punishment due to sin, he or she will respond in repentance and seek God’s forgiveness. Thirdly, the response of truth faith includes humble submission to Christ.

. . . that is, the word of faith which we are preaching, that if you confess with your mouth Jesus as Lord, and believe in your heart that God raised Him from the dead, you will be saved; for with the heart a person believes, resulting in righteousness, and with the mouth he confesses, resulting in salvation. For the Scripture says, “WHOEVER BELIEVES IN HIM WILL NOT BE DISAPPOINTED.” For there is no distinction between Jew and Greek; for the same Lord is  Lord of  all, abounding in riches for all who call on Him; for “WHOEVER WILL CALL ON THE NAME OF THE LORD WILL BE SAVED.” Romans 10:8-13 (NASB)

We encourage you to read, “How do I repent of my sins? What are the steps?”

Searching For God
How can Christians be declared righteous since they sin?
What is the meaning of the word repentance in the Bible?
What is the difference between holy and righteous in the Bible?
How do I repent of my sins? What are the steps?
What must a person do to go to heaven when they die?
What is Lordship salvation? What does the Bible teach?