How can Christians be declared righteous since they sin?

How can God declare us righteous since we still sin? 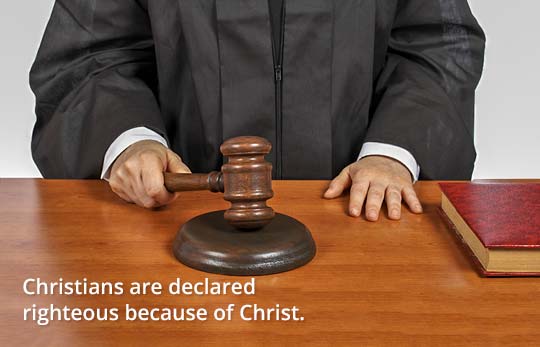 One of the cornerstone doctrines of the Christian faith is that Christians are declared righteous, not because of any deeds that they have or will do, but because Christ paid the penalty for their sins when He died on the cross.

. . . He Himself bore our sins in His body on the cross, so that we  might die to sin and live to righteousness; for by His wounds you were healed. For you were  continually straying like sheep, but now you have returned to the Shepherd and  Guardian of your souls. 1 Peter 2:24-25 (NASB)

The person referred to in this passage by “He Himself” is Jesus Christ (1 Peter 2:21-23). We are told that Jesus bore our sins in His body. The Greek word translated as “bore” is avaphero. It is a compound word of “up” and “bear.” That is Christ bore up our sins in His body. He willingly took them on Himself (Hebrews 10:5-10).

The act of taking our sins on Himself means that He suffered in our place. The message of Romans 6:23 is that the wages of sin is death. Because we are sinners who sin, we deserve punishment, to die spiritually. Ezekiel 18:20 and Romans 6:23 summarize our condition this way,

When Christ died on the cross, He was the just who died for the unjust or the undeserving. We did not and we do not deserve this gift that Christ gave us. We deserve to die and be condemned for forever. But in His vicarious and sacrificial death, He made it possible for us for us to be with God.

For Christ also died for sins once for all, the just for the unjust, so that He might bring us to God, having been put to death in the flesh, but made alive in the spirit . . . 1 Peter 3:18 (NASB)

Christians Are Freed From Sin and Death

Because Christ paid our penalty for our sins and satisfied the Father’s wrath against our sins those who believe in Christ are justified or declared to be righteous.

. . . for all have sinned and fall short of the glory of God, being justified as a gift by His grace through the redemption which is in Christ Jesus; whom God displayed publicly as a propitiation in His blood through faith. Romans 3:23-25 (NASB)

The Greek word translated as “justified” is a present passive participle. The passive means that God did it for us. The present participle implies continuous action. Everyone who believes or has faith in Christ is a Christian. He or she has been redeemed from sins, death and Satan (Hebrew 2:14). The wrath of God the Father against our sin has been satisfied (propitiation) because Christ died on the cross.

Christ did this for us even though we were enemies of God. We were helpless and undeserving. So God helped us. He reconciled us to Himself (Colossians 1;20-21).

For while we were still  helpless, at the right time Christ died for the ungodly. For one will hardly die for a righteous man;  though perhaps for the good man someone would dare even to die. But God demonstrates His own love toward us, in that while we were yet sinners, Christ died for us. Much more then, having now been justified by His blood, we shall be saved  from the wrath of God through Him. For if while we were enemies we were reconciled to God through the death of His Son, much more, having been reconciled, we shall be saved by His life. And not only this, but we also exult in God through our Lord Jesus Christ, through whom we have now received  the reconciliation. Romans 5:6-11

. . . for all have sinned and fall short of the glory of God, being justified as a gift by His grace through the redemption which is in Christ Jesus; whom God displayed publicly as a propitiation in His blood through faith. Romans 3:23-25 (NASB)

Why did God only require faith (Romans 3:27-28)? Because He knew sinners could never earn it (Romans 3:10-18). Salvation is by faith and not works. We could not earn salvation if we tried. Salvation is gift. We are saved by grace through Christ alone by faith alone.

For  by grace you have been saved  through faith; and  that not of yourselves, it is  the gift of God; not as a result of works, so that  no one may boast. For we are His workmanship, created in  Christ Jesus for  good works . . .  Ephesians 2:8-10 (NASB)

When God declares us to be righteous it is a gift!

Are You A Christian? – Two Answers to Help
Do I have to believe that Jesus is God to be saved?
If a person leaves Christianity do they “lose” their salvation?
Saved Only Once
How can you know for sure that you believe in Jesus?
Am I still a Christian if I continue sinning?
Can a Christian stray from the faith and still be a Christian?
I am having doubts about my salvation.
Searching for God
What is the difference between holy and righteous in the Bible?