Is someone a Christian if they practice unrepentant sin?

Is someone who practices unrepentant sin a Christian?

It is common for many to think that they are Christians. They do not attend church regularly. They attend when they desire. During the week God is rarely on their minds. One such man had sexual relationships with multiple women and was involved with drugs. He got a woman pregnant and then dumped her. Yet, he attended Bible studies because some friends attended. He considered himself a Christian because he had a demonic experience once and believed that God rescued him. Yet, he never repented of sin. That is, he lived in unrepentant sin. He thought he was a Christian.

Men and Women Are Self-Deceived

It is important to realize that God states in 1 John 3:4-10 that anyone who lives in sin and is unrepentant is not a Christian. Such individuals are not necessarily liars, but simply deceived. Jeremiah 17:9 says that we deceive ourselves.

The heart is more deceitful than all else
And is desperately sick;
Who can understand it? Jeremiah 17:9 (NASB)

Sadly, that is the situation for most people.

Those Who Practice Sin Are Lawless

1 John 3:4 tells us that those who repeatedly sin are lawless.

The Greek word that is translated as “practices” is poieo. This Greek word means “to do.” The verb is a present participle meaning that it describes a person who habitually sins. This sin is a pattern of life. The word lawless reveals their character of life. They have no desire to obey God. That is, they are not sorry for their behavior. They do not confess their sins to God. They may make excuses for their conduct. They do not change.

1 John 3:5 reminds us that Jesus came to take away sin. He did not come and die with the idea that a Christian would continue to be lawless and habitually sin without remorse or repentance.

In Romans 8:13-14 gives us a characteristic of a Christian.

. . . for if you are living according to the flesh, you must die; but if by the Spirit you are putting to death the deeds of the body, you will live. For all who are being led by the Spirit of God, these are  sons of God. Romans 8:13-14 (NASB) 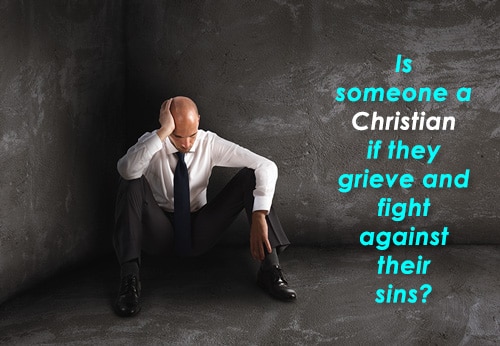 The characteristic of a Christian is that he or she is at war against sin. Christians are not complacent and content. These two verses also reveal that when the Holy Spirit is indwelling a person, a Christian, he or she will hate their sin and be working hard to stop sinning (Romans 7:21-24). In sharp contrast the individual in 1 John 3:4 is not struggling against sin. He or she is lawless.

Matthew 13:18-23 describes two ways to identify lawless people who think they are Christians. These individuals hear the good news that Jesus Christ is the Savior from sin and is Lord. They respond with excitement, but they never really believe in Christ and trust Him to forgive their sins. Matthew 13:20-22 describes two types of people who responded positively at first but later demonstrate that they are not Christians because they reject Christ and return to their former pattern of life. One type of person returns to their former life because of persecution and the other type returns because they want fun and pleasure.

1 John 3:6 tells us that those who abide in Jesus, that is Christians, make it a practice to not sin. Then we are given two important principles in verses 7-8.

The first principle to notice is that those who practice righteousness are righteous. Again the Greek word for practice is a present participle. That is, this is a habitual pattern. It does not mean that they will never sin. For example 1 John 1:9 says that a Christian is one who is confessing their sins and 1 John 2:1-2 reveals that Jesus defends Christians. That is, Christians will increasingly live a holy life. They are not perfect; they want to be perfect. Only Christians will long to be righteous and will fight the war against sin to be righteous. This means that someone who is living in unrepentant sin is not a Christian. They never were Christians. The second principle is those who practice sin are of the devil. They are not Christians.

We encourage you to read “Must a person repent in order to go to heaven?”

The Greek word that is translated as practice is once again a present participle, meaning that this is a habitual pattern. Notice that the children of the devil habitually sin but that is not true of Christians.

Test yourselves to see if you are in the faith; examine yourselves! Or do you not recognize this about yourselves, that Jesus Christ is in you — unless indeed you fail the test? 2 Corinthians 13:5 (NASB)

That is, a Christian will not be habitually committing the same sin. However, a real Christian will be repentant and at war against sin in their lives. Praise the Lord.