I am backslidden and feel hopeless; can I be born again?

I was so zealous for God. I was saved when I was a boy. Then I strayed and sinned against heaven and earth for forty years. I do not deserve to go to heaven now. I just want to know God. How can I know God through the Bible?

Have you backslidden and feel hopeless? That is, you once felt close to God and then you moved away. Do you believe that you are going to hell because of your sins and want to be saved from hell? Do you wonder how you can be born again? If so, then what follows will provide you guidance and hope! 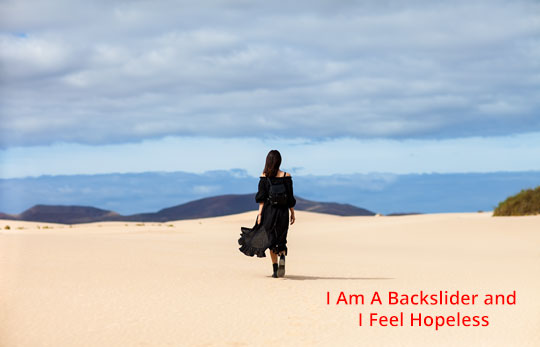 The Backslider Who Was Never A Christian

Jesus gave the parable of the Sower of the Seed which describes three different examples of  false Christians and one example of a real Christian. The reader is encouraged to read, “Parable of The Sower and The Seed” for an explanation of the parable. The second example of a false believer is likened to rocky soil. Initially, this type of person responds with joy because they believed what they heard. But they only believe for a short period of time. They are described as being temporary (Matthew 13:20-21; Luke 8:13). They were  never a true Christian; they simply responded with joy and enthusiasm to the good news for awhile. Many would call this type of person a backslider, but the truth is they were never a Christian.

The Backslider Who Is An Unrepentant Christian

The second type of “backslider” is a Christian who has been habitually sinning and been unrepentant. For example, the books of 1 and 2 Corinthians were written to people attending the church in Corinth. Throughout both books the Holy Spirit rebukes the Corinthians in chapter after chapter for sin after sin. Their sins range from causing conflicts, divisions, filing lawsuits against one another, sexual sins and disorder in the church. They were guilty of so many sins that at the end of 2 Corinthians Paul wrote these words,

Test yourselves to see if you are in the faith; examine yourselves! Or do you not recognize this about yourselves, that Jesus Christ is in you — unless indeed you fail the test? 2 Corinthians 13:5 (NASB)

Here Paul asks them to evaluate their lives and determine if they were really Christians. The apostle doubted that they were Christians.

Why did he doubt? Why should we doubt anyone is a Christian when they are guilty of ongoing sin? The apostle Paul tells us in Romans 8:13-14 that one of the proofs a person is a Christian is that they are sinning less and less.

Notice that Paul says a those who are led by the Spirit of God, that is Christians, are putting to death the deeds of the body. That is they are sinning less and less (Galatians 5:16-21). In sharp contrast, a Spirit-filled Christian will have the fruit of the Spirit growing in his or her life (Galatians 5:22-23).

This type of sinful Christian is what most people think of as being a backslider, but the truth is there is strong reason to believe that such a person was never a Christian.

Anyone who believes they are a backslider needs to start by repenting of their sins. Notice in Psalm 51:4 that when King David confessed his sins to God he admitted that he had sinned against God and only against Him. That is where confession starts.

Against You, You only, I have sinned
And done what is evil in Your sight,
Psalm 51:4 (NASB)

That is where every truly repentant unbeliever and repentant Christian starts. We admit our sin against God. Anyone who has been habitually committing sin will have a sense that God is not listening and that God is rejecting them. The solution to the problem starts with confessing our sins. In response God forgives. Listen to King David once again.

I acknowledged my sin to You,
And my iniquity I did not hide;
I said, “I will confess my transgressions to the LORD”;
And You forgave the guilt of my sin. Selah.
Psalm 32:5 (NASB)

But more than likely, as we have already discovered, one who has been a “backslider” was probably never a Christian. They heard about Christ and believed somethings about Jesus, but it was fake or vain faith (1 Corinthians 15:2). The proof of real faith is that a real Christian will yield themselves to God and victory over sin will increase–not decrease. The backslider should respond by first accepting or receiving Christ (John 1:12). For an explanation of how to be born again, receive Christ or how to become a Christian, please read the following:

How do you receive Christ?

Must we confess Jesus as Lord with our mouth to be saved?

Do I have to believe that Jesus is God to be saved?

Is salvation by grace through faith alone?

Anyone who seeks God, must start by receiving Christ as their Savior and Lord. For those who feel hopeless, God has promised to save any person who truly seeks Him and desires to be forgiven. That is the message of Romans 10:13.

WHOEVER WILL CALL ON THE NAME OF THE LORD WILL BE SAVED. Romans 10:13 (NASB)

After receiving Christ it is important to grow spiritually. This involves reading and studying the Bible, praying and confessing your sins. The study in the Book of Ephesians is an important place to start, followed by a study in the Book of Romans. We also suggest the studies in the Doctrinal Studies and Discipleship Series sections.  Please visit “Guidance For New Christians.”

Parable of The Sower and The Seed
Searching for God
How do you receive Christ? What does John 1:12 mean?
Must we confess Jesus as Lord with our mouth to be saved?
I want to seek God; how do I seek God?
Do I have to believe that Jesus is God to be saved?
Is salvation by grace through faith alone?
Doctrinal Studies
Discipleship Series
Book of Romans