Will people who eat pork be least in the kingdom of Heaven? — Matthew 5:17-19

Does Jesus' statement in Matthew 5:17-19 mean that anyone who breaks the Old Testament dietary laws will be considered the least in the Kingdom of Heaven?

Leviticus 11:1-47 and Deuteronomy 14:3-21 list the forbidden foods contained in the Mosaic Law. Some believe these dietary laws are still in force for a variety of reasons and Bible passages. Among the passages is Matthew 5:17-19. In this passage Jesus said that whoever annuls one of the commandments will be least in the kingdom. Consequently, some teach that we are not allowed to eat meat from pigs, which includes bacon, pork ribs, spareribs, prosciutto, salami, pork loin, pork belly, pork chop, ham, and  pork sausage. Therefore, the question we are concerned with is, “Will people who eat pork be least in the kingdom of Heaven?” 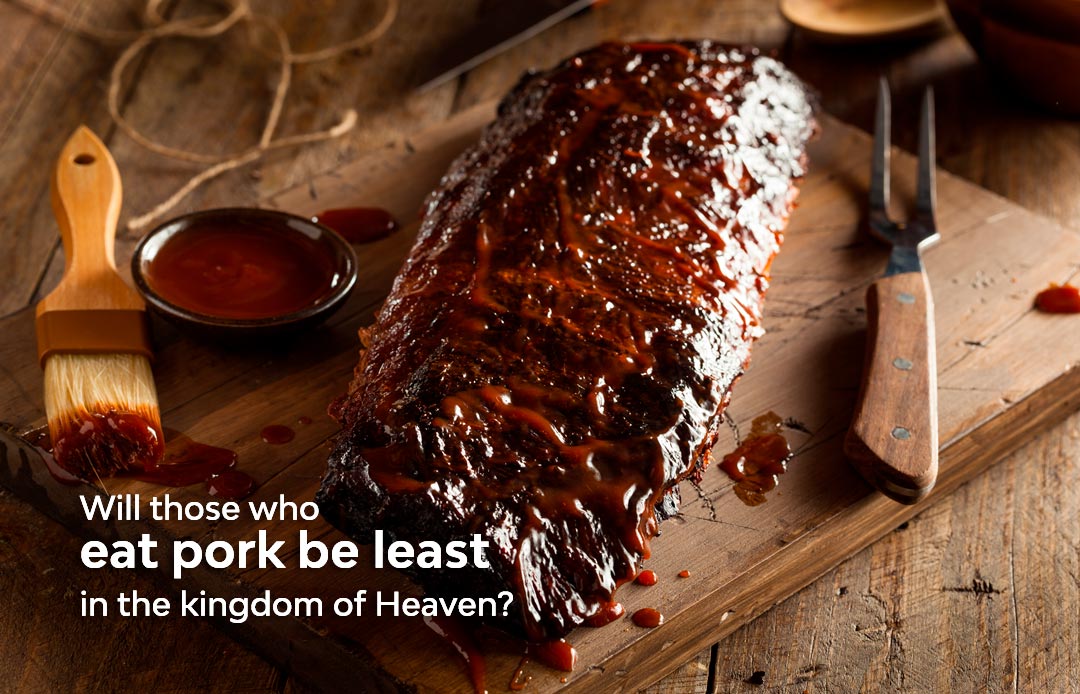 Do not think that I came to abolish the Law or the Prophets; I did not come to abolish but to fulfill. For truly I say to you, until heaven and earth pass away, not the smallest letter or stroke shall pass from the Law until all is accomplished. Whoever then annuls one of the least of these commandments, and teaches others to do the same, shall be called least in the kingdom of heaven; but whoever keeps and teaches them, he shall be called great in the kingdom of heaven. Matthew 5:17-19 (NASB)

Jesus’ message is that people are not allowed to change what God has written. That is, God is not pleased when we change what He has written. He has warned that if we change what He wrote, we will suffer. At the end of the book of Revelation God says that if anyone removes anything from the book He will remove them from the tree of life and the holy city (Revelation 22:18-19). Other such warnings exist in the Old Testament (Exodus 32:33; Psalm 69:27-28). So, the warning is clear.

Eat Pork Be Least In the Kingdom of Heaven?

So, are those who teach that we can eat various cuts of pig meat going to suffer or be punished? The answer is no, because God changed the rules. For example, in Mark 7:18-19 we are told that Jesus said

. . . “Are you so lacking in understanding also? Do you not understand that whatever goes into the man from outside cannot defile him, because it does not go into his heart, but into his stomach, and is eliminated?” (Thus He declared all foods clean.) . Mark 7:18-19 (NASB)

That is, Jesus, our God, eliminated the dietary regulations in the Mosaic Law. So, the Apostle Peter fell into a trance and learned about things that the Jews had considered to be unclean (Acts 10:9-15). In his trance God told Peter that Gentiles and food were not unclean. God had declared them to now be clean. This illustrates Jesus’ statement which eliminated the dietary laws in the Mosaic Law.

In 1 Timothy 4:1-5, the apostle Paul also warned us about “deceitful spirits and doctrines of demons” who “advocate abstaining from foods.”

So, Jesus eliminated the dietary ordinances in the Mosaic law. This change is illustrated in Peter’s dream, and the apostle reinforces Jesus’ teaching. He also warns against those who teach and advocate that we need to still keep the dietary laws. In fact, He says these individuals are influenced by “deceitful spirits and doctrines of demons.”

That is, Peter was told to eat the animals that had been prohibited in the Mosaic Law. Therefore, the answer to our question, “Will people who eat pork be least in the kingdom of Heaven?” is, “No!” We are free to eat all foods. That is from God’s Word and we have been warned to not change it. Only God can change His Word.

Is it a sin for a Christian to eat pig’s meat?
Is it a sin to eat unclean animals today?
Could Jesus have eaten turkey on Thanksgiving Day? — Mosaic Dietary Law
Which Old Testament laws can we ignore?
Why does Isaiah 66:15-17 say God will judge those who eat pig’s meat?
Was ‘thus He declared all foods clean’ inserted by man? – Mark 7:19