Is it a sin to eat unclean animals today?

Is it a sin to eat unclean animals today?

The Mosaic Law prohibited the eating of certain animals. These foods were called unclean. The list of the unclean foods can be found in Leviticus 11:1-47 and Deuteronomy 14:1-21. The article “Could Jesus, as a faithful Jew, have eaten turkey on Thanksgiving Day?” provides a summary of the foods that the Mosaic Law prohibited. The question that will be answered in this article is, “Is it a sin to eat unclean animals today?” 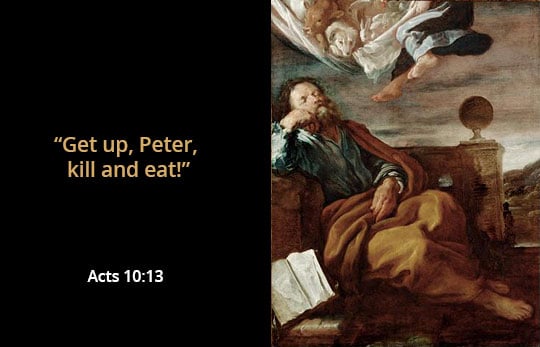 Acts 10:9-16 tells us that the apostle Peter fell into a trance while preparing some food on the roof of a house. While in the trance, he saw a giant sheet coming down from the sky. The sheet contained a wide variety of animals.

On the next day, as they were on their way and approaching the city, Peter went up on the housetop about the sixth hour to pray. But he became hungry and was desiring to eat; but while they were making preparations, he fell into a trance; and he saw the sky opened up, and an object like a great sheet coming down, lowered by four corners to the ground, and there were in it all kinds of four-footed animals and crawling creatures of the earth and birds of the air. A voice came to him, “Get up, Peter, kill and eat!” But Peter said, “By no means, Lord, for I have never eaten anything unholy and unclean.” Again a voice came to him a second time, “What God has cleansed, no longer consider unholy.” This happened three times, and immediately the object was taken up into the sky. Acts 10:9-16 (NASB)

Among these animals were some unclean animals. Peter was commanded to eat the animals three times. Twice he refused to eat. He finally obeyed the command the third time.

Two Messages of The Vision

Acts 10:17-19 tells us that Peter did not immediately understand the message of the vision and was trying to determine its meaning. Verse 28-29 reveals that Peter finally understood the message of the dream when three men arrived at the gate of the house. The vision taught him that Gentiles were not unclean people and Jews should speak and interact with Gentiles. Later when Peter returned to the city of Jerusalem after visiting Cornelius, Peter told some of the Jewish believers the vision (Acts 11:2-12) and connected the meaning of it to the salvation of the Gentile Cornelius and his household.(Acts 10:24).

But there is another message in Peter’s vision. In Leviticus 20:22-26 God told the Israelites that they were not to intermingle with the Gentiles in the land of Canaan. They were to keep the Old Testament Jewish dietary laws. Leviticus 20:22-26 and Acts 10:9-16; 11:2-12 helps us understand the Mosaic dietary laws were established primarily to separate Jews from Gentiles. In order for Peter to be able to visit with Cornelius and his household, God eliminated the Mosaic dietary laws. This is an important point. Notice that Peter said in Acts 10:28-29 that it was unlawful for a Jew to associate with a foreigner.

And he said to them, “You yourselves know how unlawful it is for a man who is a Jew to associate with a foreigner or to visit him; and yet God has shown me that I should not call any man unholy or unclean. That is why I came without even raising any objection when I was sent for. So I ask for what reason you have sent for me.” Acts 10:28-29 (NASB)

The vision communicated two truths. The first truth is that Gentiles are not unclean, a distortion taught by the Jewish religious leaders. The second truth is that Peter was now allowed to eat Gentile food. Otherwise he could not have spent the day with them. The Mosaic dietary laws were abolished in Acts 10:9-16; 11:2-12; 13:38-39. In 1 Timothy 4:1-5, the apostle warns that those who teach we should obey the Mosaic dietary laws are influenced by demons. They are teaching doctrines of demons.

Much has been published and discussed about the health benefits of the Mosaic dietary restrictions regarding clean and unclean animals. R. Laird Harris writes,

The spiritual and the hygienic reasons for the laws may still be affirmed. They are remarkably valuable in the area of public health. Maimonides already in the Middle Ages gave this explanation among others. It would be in line with God’s promised blessing that “none of these diseases” of Egypt would be visited on Israel, for “I am the Lord your Healer” (cf. Exod. 15:26).

. . . . In general it can be said that the laws protected Israel from bad diet, dangerous vermin, and communicable diseases. Only in very recent days have better laws of health been possible with the advance of medicine. These were rule-of-thumb laws that God gave in His wisdom to a people who could not know the reason for the provision.[1]

But the establishment of the Mosaic dietary regulations regarding unclean animals was for health reasons and to prevent the Israelites from spiritually falling away from God. The elimination of unclean animals from the diet in Acts 11 was timely and necessary.

Is it a sin for a Christian to eat pig’s meat?
You Are a Peter Too!
What does Genesis 7:2 mean when it says “seven clean beasts?”
Could Jesus, as a faithful Jew, have eaten turkey on Thanksgiving Day?
What Old Testament laws can we ignore?