If Jesus had celebrated thanksgiving with us as a faithful Jew, would He have eaten turkey?

The LORD spoke again to Moses and to Aaron, saying to them, “Speak to the sons of Israel, saying, ‘These are the creatures which you may eat from all the animals that are on the earth.'” Leviticus 11:1-2   (NASB)

Here is a summary of the list of the foods the Israelites could and could not eat prior to the arrival of Christ: 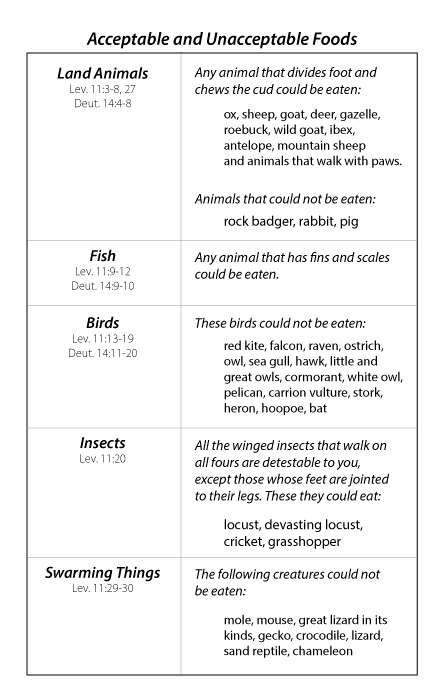 But when Christ came, He changed the laws regarding the eating of food. For example, in Matthew 15:15-20 and Mark 7:14-23, Jesus teaches us that what “comes from the heart defiles a man or woman. Why? Because it reveals the sinful heart of the individual. But while teaching us this principle Jesus also taught us that all foods were now clean. Mark 7:19 and Luke 11:41 teach us this principle.

Christ makes a simple statement. We are free to eat whatever we desire. The Mosaic dietary laws were removed just as the Mosaic Ceremonial Laws of worship (priests, tabernacle, temple and sacrifices) have been removed (Hebrews 8:7-13; 9:15-10:2).

An Angel Confirms the Change

After Jesus’ death and resurrection, a holy angel confirms this change in Acts 10 in a vision to the apostle Peter. We find the change in Acts 10:9-15. More details about the dream are found in Acts 11:4-10.

On the next day, as they were on their way and approaching the city, Peter went up on the housetop about the sixth hour to pray. But he became hungry and was desiring to eat; but while they were making preparations, he fell into a trance; and he saw the sky opened up, and an object like a great sheet coming down, lowered by four corners to the ground, and there were in it all kinds of four-footed animals and crawling creatures of the earth and birds of the air. A voice came to him, “Get up, Peter, kill and eat!” But Peter said, “By no means, Lord, for I have never eaten anything unholy and unclean.” Again a voice came to him a second time, “ What God has cleansed, no longer consider unholy.” This happened three times, and immediately the object was taken up into the sky. Acts 10:9-15  (NASB)

But Peter began speaking and proceeded to explain to them in orderly sequence, saying, I was in the city of Joppa praying; and in a trance I saw a vision, an object coming down like a great sheet lowered by four corners from the sky; and it came right down to me, and when I had fixed my gaze on it and was observing it I saw the four-footed animals of the earth and the wild beasts and the crawling creatures and the birds of the air. I also heard a voice saying to me, ‘Get up, Peter; kill and eat.’ But I said, ‘By no means, Lord, for nothing unholy or unclean has ever entered my mouth.’ But a voice from heaven answered a second time, ‘What God has cleansed, no longer consider unholy.’ This happened three times, and everything was drawn back up into the sky” Acts 11:4-10 (NASB)

Notice that both Acts 10:15 and Acts 11:9 state, “What God has cleansed, no longer consider unholy.” Since Christ had already declared that we are free to eat anything we desire, it is important to realize that the angel reaffirms this change in the Mosaic dietary laws.  However, that does not mean we should eat poisonous mushrooms and eat animals that are known to be deadly. God does expect us to use common sense.

The Apostle Paul Confirms the Change

Many who are currently following the Mosaic dietary laws have missed 1 Timothy 4:1-5, which states that those who teach we should obey these laws are teaching the doctrines of demons.

But the Spirit explicitly says that in later times some will fall away from the faith, paying attention to deceitful spirits and doctrines of demons, by means of the hypocrisy of liars seared in their own conscience as with a branding iron, men who forbid marriage and advocate abstaining from foods which God has created to be gratefully shared in by those who believe and know the truth. For everything created by God is good, and nothing is to be rejected if it is received with gratitude; for it is sanctified by means of the word of God and prayer. 1 Timothy 4:1-5 (NASB)

This reveals that the apostle Paul confirms that we are free to eat any food, because everything that God has created is good.

The list of acceptable and unacceptable foods from Leviticus 11:1-47 and Deuteronomy 14:1-21 reveal that Jesus could have eaten turkey on Thanksgiving day even before He eliminated the Mosaic dietary laws. This would have been true before and after Mark 7:19; Luke 11:41 and the message given to Peter in his vision in Acts 11:4-9.

While the purpose of this article is to discuss the change in the Mosaic dietary laws, it is important to note that Peter’s vision was also designed to teach him that just as Christ had changed the dietary laws and all foods were now clean, all Gentiles were also clean (Acts 10:15, 17-23, 28).

Is it a sin for a Christian to eat pig’s meat?
What Old Testament laws can we ignore?
You Are a Peter Too!
Is it a sin to eat unclean animals today?