During the thousand year reign of Christ will Christians live in heaven?

During the thousand year reign of Christ , what happens to those who are saved, will they spend those 1000 years in heaven or will they stay on the earth?

The Bible teaches us that when Christ returns at the end of the tribulation, the armies which are in heaven will come with Him.

And the armies which are in heaven, clothed in fine linen,white and clean, were following Him on white horses. From His mouth comes a sharp sword, so that with it He may strike down the nations, and He will rule them with a rod of iron; and He treads the wine press of the fierce wrath of God, the Almighty. And on His robe and on His thigh He has a name written, “KING OF KINGS, AND LORD OF LORDS.”  Revelation 19:14-16 (NASB) 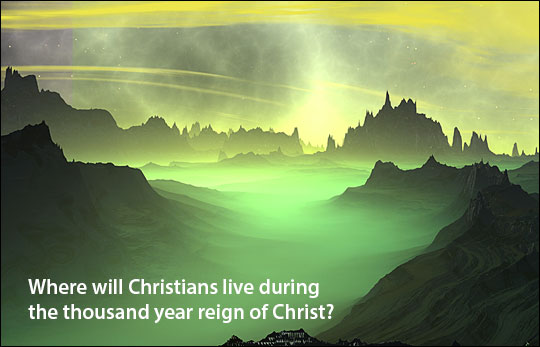 After these things I looked, and behold, a great multitude which no one could count, from every nation and all tribes and peoples and tongues, standing before the throne and before the Lamb, clothed in white robes, and palm branches were in their hands; and they cry out with a loud voice, saying,

Zechariah 14:5 echoes the same truth that all the holy ones will come with Christ (see Zechariah 14:1-5). The message of Revelation is more precise and reveals that these holy ones who are clothed in white garments are Christians (Matthew 24:30). Therefore, the armies of heaven are composed of Christians and angels.

Sheep and Goat Judgment After The Battle Of Armageddon

After Christ defeats the armies of the world (Revelation 19:15, 18-19), the Sheep and Goat Judgment will occur in which Christians and non-Christians who are alive on earth after the tribulation will be separated. The non-Christians will go to hell and Christians will enter the kingdom (Matthew 25:31-46). For an explanation of the Sheep and Goat Judgment, visit “When and where does the Goat and Sheep judgment occur?” Therefore, the millennial kingdom will be initially populated by only the holy ones who came with Christ at the battle of Armageddon and the Christians who were still alive at the end of the tribulation.

The Kingdom Is Composed Of Christians Who Will Reign

Why do we know that all Christians will be in the kingdom?  Revelation 5:9-10 tells us that the angels will sing a song. Here is their song,

And they sang a new song, saying,

“Worthy are You to take the  book and to break its seals; for You were slain, and  purchased for God with Your blood men from  every tribe and tongue and people and nation.

“You have made them to be a kingdom and priests to our God; and they will reign upon the earth.” Revelation 5:9-10 (NASB)

Verse 9 refers to Christians and in verse 10 we are told that they will be a kingdom and priests for God and reign upon the earth. This reveals that those who are Christians since the time of Christ will be in the kingdom and reign with Christ. Notice that we are told Christians will reign on the earth. Four other passages also teach that Christians will reign with Christ. They are 1 Corinthians 6:2; 2 Timothy 2:12 and Revelation 1:5b-7; 2:26. This will occur during the kingdom.

Or do you not know that the saints will judge the world? 1 Corinthians 6:2 (NASB)

To Him who loves us and released us from our sins by His blood —  and He has made us to be a kingdom, priests to His God and Father — to Him be the glory and the dominion forever and ever. Amen. Revelation 1:5b-7 (NASB)

He who overcomes, and he who keeps My deeds until the end, TO HIM I WILL GIVE AUTHORITY OVER THE NATIONS . . . Revelation 2:26 (NASB)

It is important to note that the Old Testament saints will also reign with Christ alongside Christians. Daniel 12:13 teaches that they will be resurrected at the end of the age and Daniel 7:27 states that they will reign in the kingdom, which includes the earthly kingdom and eternal kingdom (Revelation 20:4; 21:27).

Then the sovereignty, the dominion and the greatness of all the kingdoms under the whole heaven will be given to the people of the saints of the Highest One; His kingdom will be an everlasting kingdom, and all the dominions will serve and obey Him. Daniel 7:27 (NASB)