Judges 11:30-31 tells us that Jephthah asked God to give him victory over the Ammonites and in return he would give God whatever would come out of the doors of his house. So the Lord gave him victory. As Jephthah was returning home, his daughter came out of the door. Some people believe that Jephthah’s daughter was then sacrificed as a burnt offering. Others think she was forced to become a perpetual virgin and still others believe she was a spiritual burnt offering and not an actual one. Our question is, “Did Jephthah sacrifice his daughter as a burnt offering to the Lord?” 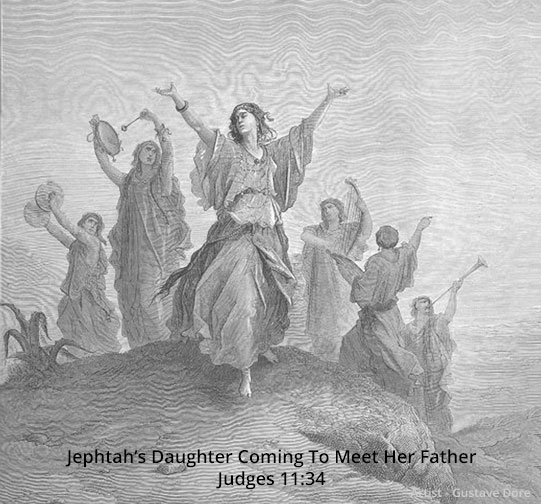 The account of Jephthah and his daughter begins with his vow in Judges 11:30-31.

Jephthah made a vow to the Lord and said, “If You will indeed give the sons of Ammon into my hand, then it shall be that whatever comes out of the doors of my house to meet me when I return in peace from the sons of Ammon, it shall be the Lord’s, and I will offer it up as a burnt offering.” Judges 11:30-31 (NASB)

When Jephthah returned from the victory, his daughter came out of the house to meet him with tambourines and dancing (Judges 11:34). When he saw her, he was grieved because he had made a vow to fulfill it. He said, “I cannot take it back” (Judges 11:35).

In response she tells her father that he must keep his vow. Therefore, she asks that she be allowed to spend two months on a mountain with her friends. After the two months, her father did to her according to his vow.

At the end of two months she returned to her father, who did to her according to the vow which he had made; and she had no relations with a man. Judges 11:39a (NASB)

Then we are told in Judges 11:40 that Israel had a custom of remembering what had happened to the daughter of Jephthah.

Thus it became a custom in Israel, that the daughters of Israel went yearly to commemorate the daughter of Jephthah the Gileadite four days in the year. Judges 11:39b-40 (NASB)

But what does the phrase “who did to her according to the vow which he had made” mean in verse 39? The phrase does not tell us exactly what happened. The next statement, “and she had no relations with a man” in verse 39 seems to suggest that she became a perpetual virgin. Therefore, what happened to his daughter?

Reason #1.  Jephthah’s vow specifics that “whatever” would come out of the doors of his house would be sacrificed as a burnt offering (verse 31). The Hebrew word that is translated as “whatever” can also be translated as “whoever” and  refer to a person. This view says in some Israeli homes at that time animals were allowed into the homes. It is possible that Jephthah was thinking about an animal and was surprised when he came home and his daughter came out. His vow was not a wise one. It was a hasty one.

Reason #2. This view says the word “it” in the phrase “I will offer it up as a burnt offering” refers to the “whatever” would come out of the doors of his house, and the “it” was to be sacrificed (verse 31). This view says, therefore, that she died as a result of being sacrificed.

Reason #4. This view says, “The yearly commemoration of this noble girl makes sense only if she died at the hands of her father.”[2]

Reason #5. The early church fathers and historians have believed that Jephthah’s daughter was sacrificed.  Some of these writers include: Ephrem the Syrian, Augustine, Origen, Ambrose, and Chrysostom.[3] Cundall and Morris make the following strong statement,

All the earlier commentators and historians accepted that Jephthah actually offered up his daughter as a burnt-offering. It was not until the Middle Ages that well-meaning but misguided attempts were made to soften down the plain meaning of the text.[4]

Reason #1. Elon Woods says that Jephthah’s vow is not correctly translated and should be understood as a vow of dedicating something to God. Here is his comment,

A further note is in order relative to the Hebrew verb and noun translated in the phrase of Jephthah’s vow, “I will offer up for a burnt offering” (Judg. 11:31). Both the verb and noun come from the one root, ‘olah (sic), meaning “to go up.” It is true that the combination of both in the Old Testament commonly means, “to offer a burnt offering. ” The words themselves, however, do not connote the idea of death. They speak only of something being given up to God. A literal translation of Jephthah’s words, in fact, would be, “I cause that which goes up to go up.”[7]

Cyril Barber also states that ‘olah meant “to ascend.” It referred to smoke rising and then later to burnt offerings.[8]

Reason #2. Another supporting point for this view is that repeatedly Jephthah’s daughter is concerned about her virginity and not her death (Judges 11:37-39). She requested permission to go up to the mountain to weep because of her virginity (v. 37-38). She cried because she was going to be a virgin the rest of her life.

Reason #3. This view points out that Judges 11:39 says that after her father “did to her according to the vow which he had made,” it then says “she had no relations with a man.” Why is that important if she is dead? The repeated concern since verse 37 is that she will not marry and will be childless. Judges never says that his daughter was killed or sacrificed.

The repeated concern since verse 37 is that she would not be able to marry and would be childless. To not marry and have a children was a great dishonor in Israel at that time. Marriage and children are a sign of God’s blessing (Genesis 1:28; Psalm 127:4-5; Proverbs 18:22), contrary to our culture’s current self-centered attitude. Children and marriage will either develop maturity or will reveal selfishness.

Reason #5. The last point for this view is that Jephthah is honored in Hebrews 11:32 along with Gideon, Samuel, David and others as a man of faith. If he committed the horrible sin of human sacrifice, how could he be so honored?

The last view states that the Jephthah’s vow is a commitment to offer a spiritual brunt offering.[9]  Keil and Delitzsch hold to this view and they state,

. . .”and she knew no man,” is not in harmony with the assumption of a sacrificial death . . . The father fulfilled his vow upon her, and she knew no man, i.e., he fulfilled the vow through the fact that she knew no man, but dedicated her life to the Lord, as a spiritual burnt-offering, in a lifelong chastity. It was the willingness of the daughter to sacrifice herself which the daughters of Israel went every year to celebrate,—namely, upon the mountains . . .

Their point is that “and she knew no man” explains how Jephthah fulfilled his vow.

It appears that view #2 is the most likely view. While it is true that some information can be used to support multiple views, both view #2 and view #3 capture the unique issue. Why was “and she knew no man” added after we are told that Jephthah “did to her according to the vow which he had made”? View #2 also is supported by Hebrews 11:32 honoring Jephthah. Therefore, it is concluded that Jephthah’s daughter was a perpetual virgin, in fulfillment of her father’s vow.

Why did God allow Jephthah to sacrifice his daughter?
Characteristics of Biblical Faith
Levitical Sacrificial Offerings