Dr. Bruce Waltke once told a story about a man who attempted to cross the frozen St. Lawrence River in Canada. The man was unsure of the ice sheet covering the river. At first he tested the firmness of the ice by laying his hands on it. Then he kneeled on the ice and eventually stood to his feet and carefully, slowly walked on it. When he had almost reached the most dangerous part of the river, the middle, he heard a noise behind him. Looking back he saw a team of horses pulling a carriage to the river. Upon reaching the river, the horse and carriage did not stop but rushed across the ice, up the bank and away. What a picture of faith! The man in the carriage being pulled by the horses knew the ice was solid. He had no doubts. 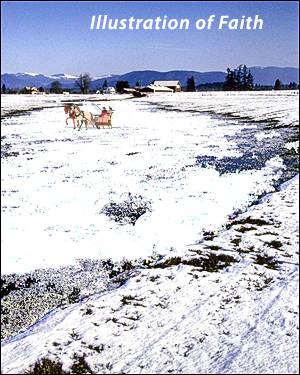 Frequently children are encouraged to ask Jesus to come into their hearts – to come in and to stay. For many young boys and girls that is very meaningful. They respond and ask Jesus into their hearts. The idea of someone’s coming into their lives and forgiving them of all the things they have done wrong and taking over their lives is what most children think they are doing. We urge children and adults to believe in Jesus. But what does that mean? What is faith? Is faith intellectually believing some facts about Jesus? Have you ever wondered what Jesus meant when He said “believe?” The book of Hebrews will answer this question for us in chapter 11.

The Holy Spirit has decided to define faith for these Hebrew readers. Why? We discover the answer to that question in the next chapter. Hebrews 11:1-12:3 is a break or a parenthesis in the discussion. The Spirit has just reminded them of their suffering, and He will continue talking about their suffering in Hebrews 12:4. But for now He wants to talk about faith. What is faith?

Now faith is the assurance of things hoped for, the conviction of things not seen. For by it the men of old gained approval. By faith we understand that the worlds were prepared by the word of God, so that what is seen was not made out of things which are visible. Hebrews 11:1-3 (NASB)

What is faith? Whatever it is, it is the “assurance” of a future event or the “title-deed” to property – something we own. It is something that is certain, the “conviction” or the proof of the invisible. Do you believe in something you cannot see? That is faith. Years ago I took my first trip to Washington D.C. I remember being excited because I experienced the fact that the city really existed. It was a real place. It was not just a legend, a story, or folklore. It was not something only in the movies. It was real! Faith believes the invisible is real!

Most of us, myself included, struggle to understand “faith is the assurance of things hoped for, the conviction of things not seen.” We struggle because we do not understand the Greek word for “faith.” We have been taught the English meaning of the word “believe” or “belief.” The Greek word means more than “believe.” Before we talk about the Greek meaning of the word “faith,” we want to understand the flow of chapter 11.

The first section of Hebrews 11 is all about obedience. Here we see Abel, Enoch, Noah, and Abraham and Sarah. Abel offered a sacrifice (v. 4). Enoch was pleasing to God (v. 5-6). He pleased God because he believed that God existed and he was seeking Him. Noah prepared an ark. Abraham “obeyed” by leaving his country and living in an alien land (v. 7-10). Sarah conceived a son (v. 11). Every illustration makes the point that real faith is marked by obedience.

Then the Spirit show that real faith believes that God’s promises about the future will happen. Here we see that Abraham offers his son because he trusts God to fulfill His promises by raising his son from the dead (v. 17-19). Isaac blesses Jacob trusting God for a future fulfillment (v. 20). The Holy Spirit is referring to Genesis 27:27-29 where Isaac blessed Jacob, with a blessing that looked to the future. In Heb. 11:21, Jacob worships Jesus (Genesis 49:10) even though He had not yet arrived. Next He says that Joseph gave orders about bringing his bones back to Israel because God had promised (Genesis 15:13 ) that the Jews would return to their land (v. 22). Moses left his royal position in Egypt because of Jesus (v. 23-29). Each example is about men who believed a future event would occur.

The final section shows us that real faith is willing to suffer.

And what more shall I say? For time will fail me if I tell of Gideon, Barak, Samson, Jephthah, of David and Samuel and the prophets, who by faith conquered kingdoms, performed acts of righteousness, obtained promises, shut the mouths of lions, quenched the power of fire, escaped the edge of the sword, from weakness were made strong, became mighty in war, put foreign armies to flight. Women received back their dead by resurrection; and others were tortured, not accepting their release, in order that they might obtain a better resurrection; and others experienced mockings and scourgings, yes, also chains and imprisonment. They were stoned, they were sawn in two, they were tempted, they were put to death with the sword; they went about in sheepskins, in goatskins, being destitute, afflicted, ill-treated (men of whom the world was not worthy), wandering in deserts and mountains and caves and holes in the ground. Hebrews 11:32-38 (NASB)

The Greek word for “faith” is pistos. Its meaning has been illustrated for us. Now for the actual meaning in the Greek. Here is a list of definitions: “belief, persuasion, obedience, confidence, trust, and conviction.” The word occurs in the papyri. There it means “guarantee.” Here is a sentence in which it was used, “You have a guarantee for all that I cannot show a written receipt for.” The word is used in Homer of the gods who vouch for the truth of an alliance or treaty. Faith is not just the belief “that the unseen God is.” It must result in obedience, a firm belief that future promises come true, and a willingness to suffer for what you know is fact. The best test that your faith is real is that you are willing to suffer. That is the ultimate test of what you consider to be truth!

Can I ask “Do you have faith?” Do you believe that God is? Are you seeking Him? If you are, you will seek to please Him by being obedient. You look to the future in heaven because it is real. But the real test that you have faith in Jesus is that you are willing to suffer for Him, to deny yourself, and to die. Faith means to trust, to rely on so much that you are ready and willing to suffer. Faith is more than simple belief in something. That is the message of Hebrews 11.

I remember as a young man sitting in a high school classroom asking Jesus to forgive me of my sins and asking Him to take control of my life. I do not remember telling Jesus that I believed in Him. That was not important. What was important was having God forgive me. I had no doubts that I was a sinner, that Jesus existed, that He was God, that He died for my sins and returned to life, and that He would take me to heaven in the future. I was depending on Him. I was relying on Him. Now that is faith!