Why did God allow Jephthah to sacrifice his daughter?

My question has to do with Judges 11:30-39. Why would God allow Jephthah to sacrifice his daughter as a burnt sacrifice when child sacrifice was strictly forbidden by God? It was a stupid vow for Jephthah to make, and I guess I was hoping that because God must have known this would happened that He would just tell Jephthah of his stupidity instead of actually allowing it to happen. I have heard two responses to this. I have read that some think Jephthah ended up giving his daughter as a living sacrifice (but the Bible does not say this). I have also read that God allowed it to teach us not to make foolish deals with God because we are not to bargain with God. If God wants to bless us, He does not want there to be strings attached. It is to be a blessing not a bargain.

Judges 11:29-40 records the well-known historical event when Jephthah made a vow and ultimately it was his daughter who was made to fulfill the vow. His vow is recorded in Judges 11:30-31.

Jephthah made a vow to the Lord and said, “If You will indeed give the sons of Ammon into my hand, then it shall be that whatever comes out of the doors of my house to meet me when I return in peace from the sons of Ammon, it shall be the Lord’s, and I will offer it up as a burnt offering.” Judges 11:30-31 (NASB)

Later Jephthah’s daughter came out of the house when her father arrived. As a result, his daughter willingly fulfilled the vow (Judges 11:34-40). Those who believe that Jephthah sacrificed his daughter have wondered, “Why did God allow Jephthah to sacrifice his daughter?” This is an important question if Jephthah, did in fact, kill his daughter and offer her as a burnt offering. What follows provides an answer to this troublesome question. 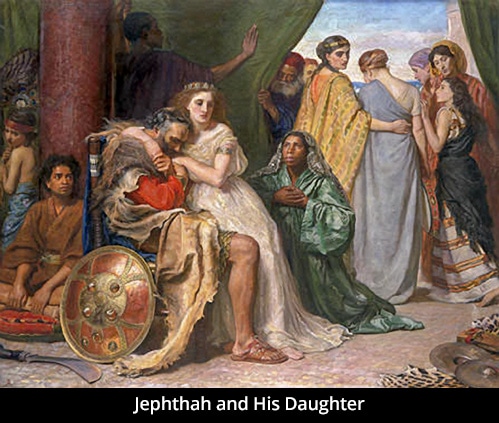 So she said to him, “My father, you have given your word to the LORD; do to me as you have said, since the LORD has avenged you of your enemies, the sons of Ammon.” She said to her father, “Let this thing be done for me; let me alone two months, that I may go to the mountains and weep because of my virginity, I and my companions.” Judges 11:36-37 (NASB)

When she said, “. . . do to me as you have said . . .” she used the imperative. That is, she commanded or every strongly urged her father to do this thing. She is not an innocent in this event.

If we assume that she was sacrificed, why did God allow this? It is important to realize that God allows each of us to commit horrible sins! We are the ones who choose to sin, not God. Murder is not any worse than anger. Note in Matthew 5:21-22 Jesus points out that anger is as evil as murder.

Therefore, we must ask, “Why God allow us to be angry?” Why does God allows us to destroy another person’s reputation with slander and hurt others with our horrible words? When James 5:9 commands us to stop complaining against one another, the Greek word for “complaining” means to “groan.” That is, we are to stop groaning against others. In James 3:8-10 we are told that our tongue is evil and full of poison and we destroy people with it.

But no one can tame the tongue; it is a restless evil and full of deadly poison.With it we bless our Lord and Father, and with it we curse men, who have been made in the likeness of God; from the same mouth come both blessing and cursing. My brethren, these things ought not to be this way. James 3:8-10 (NASB)

Therefore, why does God allow us to curse others? Why does allow you to disobey Him? Why does God allow people to commit sexual sins? The answer is that God is not responsible. We are responsible. God has commanded us to obey Him. Should He prevent us from sinning? Should He only let you to act righteously? Ecclesiastes 7:29 teaches that God made Adam upright but we have sought out evil. God allows us to sin!

Behold, I have found only this, that God made men upright, but they have sought out many devices. Ecclesiastes 7:29 (NASB)

God created mankind with a will, allowing us to choose.  He did not create robots but humans with a free will. God’s desire was for us to choose to love, worship and obey Him. We must remember that both Jephthah and his daughter were in agreement as to what would happen. She urged her father to fulfill his vow.

If Jephthah’s daughter became a perpetual virgin in order to fulfill his vow, then the concern as to why God allowed this to occur disappears. Once again, we must remember that both Jephthah and his daughter were in agreement as to what would happen. She urged her father to fulfill his vow. The article, “Did Jephthah sacrifice his daughter as a burnt offering to the Lord?” explains that Jephthah’s daughter was not sacrificed but became a perpetual virgin.

Christians today are notorious at making vows and breaking them. I noted this when I first began to move in Christian circles. As a young Christian, I went to a young’s people’s conference and watched eighteen young people go forward and dedicate themselves to the Lord for full-time Christian service. I wouldn’t go forward because I did not know whether I could make good my promise. May I say that out of all those who dedicated themselves to the Lord’s service that night, not one of them entered full-time service! Have you made a vow to God? If you have, He wants you to keep it.[1]

The Old Testament warns us to pay our vows rather than make vows we do not fulfill.

When you make a vow to God, do not be late in paying it, for He takes no delight in fools. Pay what you vow! It is better that you should not vow than that you should vow and not pay. Ecclesiastes 5:4-5 (NASB)

This is a truth we should all remember. If we promise to do something, God says do it! But this does not apply to sinful promises. Yet many good promises are not fulfilled because someone has changed “his or her mind” due to inconvenience or it is “too troublesome.” God calls us to be men and women of integrity. God wants our “yes “to be “yes” and our “no” to be “no” (Matthew 5:37)!