Since believers suffer in the tribulation, is the rapture pretribulation or posttribulation?

What Is The Rapture?

First, we must ask what is the rapture? The answer is found in 1 Thessalonians 4:16-18.

For the Lord Himself will descend from heaven with a shout, with the voice of the archangel and with the trumpet of God, and the dead in Christ will rise first. Then we who are alive and remain will be caught up together with them in the clouds to meet the Lord in the air, and so we shall always be with the Lord. Therefore comfort one another with these words. 1 Thessalonians 4:16-18 (NASB)

In this passage we are told that the Lord Jesus will descend from heaven and all Christians who have died since Christ’s resurrection will rise up into the sky. Then the living Christians will be caught up also and join them. The Greek word for “caught up” is harpazo. The word is translated as “snatches away” in Matthew 13:19; John 10:12, 28, 29; Acts 8:39 and Jude 23 in the NASB. It is translated as “take by force” in John 6:15. This helps us understand that “caught up” refers to a forceful pulling upward. This describes the rapture. The rest of the passage states that the dead in Christ and all alive Christians will be snatched up into the clouds to meet the Lord in the air. Then these Christians will always be with the Lord.

Pretribulation = Rapture Before the Tribulation

Posttribulation = Rapture After the Tribulation

But the one who endures to the end, he will be saved. This gospel of the kingdom shall be preached in the whole world as a testimony to all the nations, and then the end will come. Matthew 24:13-14 (NASB) 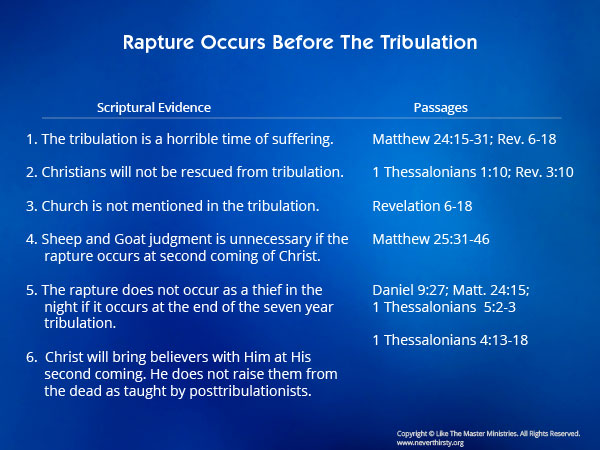 Therefore, we conclude that since Christians will suffer during the tribulation in both the pretribulation and posttribulation views, this fact alone does not help us determine the timing of the rapture. Other facts are required to help us understand that the rapture occurs before the tribulation.