Does Your Church Value Seniors?

Several years ago I was driving down a major street of our city and saw a sign about a new church. I looked at the phone number and memorized it. A few days later I called the number and spoke with the pastor about the church. I did not tell him anything about myself other than my first and last name. The pastor explained several things about the ministry and then stated that if I was an older person I was welcome to attend but the focus of the ministry was for those in their twenties to forties. I was stunned. I thought about the admonition in Titus 2:3-4 of older women teaching the younger women. Where does such a church get the counsel of older men? This young pastor did not understand or value the biblical concept of older Christians discipling and counseling younger believers. His attitude may be extreme, but the disrespect for seniors is more common than we may want to admit. 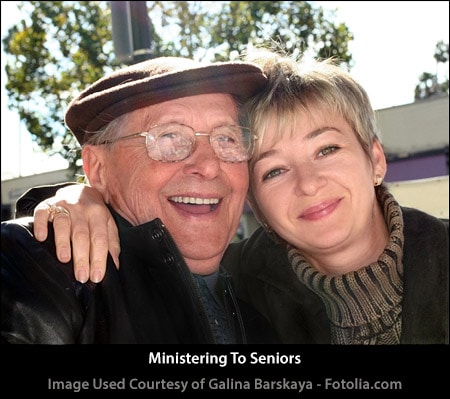 I have heard seniors complain about the loud music in many churches. I know of some who do not attend because the music hurts their ears or they do not want to risk the loss of hearing which comes with loud volumes. Yes, some seniors are complainers but that is true of all age groups. The truth is the complaints are just different. Many churches today ignore the needs of seniors in favor of the younger generation arguing that the younger generation is the “future of the church.” Many churches simply target the youth. Some pastors do not want to visit seniors in hospitals or talk with them because they “have nothing in common.” For some, hospital visitation can be uncomfortable, but how many hospital visits have the elderly made during their lifetime for loved ones, friends, and pastors?

Peter Smith reported the following in a recent Pew Forum article titled, “Are churches taking the elderly for granted?”

. . . surveys show that church-affiliated populations are older than the national population as a whole — and in many Protestant congregations, overwhelmingly so. Many churches do have plenty of classes and groups for older members. Yet many churches have paid so much attention to attracting the young that they may be overlooking the needs of those in their midst . . .”[1]

Some churches have paid so much attention to attracting the young that they are overlooking the needs of the seniors in their midst. Some pastors view seniors as an uninspiring but necessary part of the ministry, except when it comes to their money, financial portfolio, living trust, or home.

Our culture generally frowns on the elderly. This has been true for some decades. Some of us had those feelings early in life when we were teenagers. The following passages capture the attitudes of some of us when we were younger.

A wise son makes a father glad, but a foolish man despises his mother. Proverbs 15:20 (NASB)

He who assaults his father and drives his mother away is a shameful and disgraceful son. Proverbs 19:26 (NASB)

He who curses his father or his mother, his lamp will go out in time of darkness.” Proverbs 20:20 (NASB)

He who robs his father or his mother and says, “It is not a transgression,” is the companion of a man who destroys. Proverbs 28:24 (NASB)

There is a kind of man who curses his father and does not bless his mother. Proverbs 30:11 (NASB)

As we grew older we started appreciating our parents more and eventually some of us started seeking their counsel. Yet, some really do not appreciate being around seniors other than our parents. The ancient patriarch Job had to listen to some bad counsel when God allowed Satan to test him. One of his counselors was Elihu. He had a negative view of the older generation – those “abundant in years.” Listen to his comment.

The abundant in years may not be wise, nor may elders understand justice.” So I say, “Listen to me, I too will tell what I think. Job 32:9-10 (NASB)

Elihu thought he had a corner on wisdom. He reminds us of those church leaders who feel they do not need or want seniors in their churches. Later Elihu and Job’s other counselors were rebuked by God (Job 38:2).

In Matthew 15:4-6 Jesus rebuked the Pharisees for not honoring their parents. They honored their parents with words but not with action. They had devised a scheme where they would give something that they wanted to keep to God. They said it was “Corban” (Mark 7:11). As a result, they claimed that they could not give it to their parents because it had been given to God. That was a convenient spiritual rule they created. It rescued them from giving their best to their elderly parents. They probably also used something similar in their synagogues to direct their best ministries and resources to those they thought to be more important. Jesus rebuked them by saying,

But you say, “Whoever says to his father or mother, whatever I have that would help you has been given to God, he is not to honor his father or his mother.” And by this you invalidated the word of God for the sake of your tradition.”Matthew 15:5-6 (NASB)

Are we guilty of the same? Would you enjoy worshipping together with only seniors?

Some seniors move slowly because the better years of their life are gone. They are the soldiers, doctors, nurses, scientists, plumbers, electricians, barbers, carpenters, secretaries, politicians, mothers, and fathers of a past era. The Christian saints who were once the pastors, music leaders, Sunday School teachers, youth leaders, camp organizers, missionaries, Gideon representatives, Child Evangelism teachers, workers at the Gospel Rescue Missions, Campus Crusade leaders, countless volunteers, and mothers who helped in the nurseries now have wonderful memories of how God used them. Now they focus on new ministries that do not require young, agile bodies. These are the ministries of cheerful giving, prayer warriors, godly counsel and wisdom.

They were those who helped us come to faith and discover that Jesus Christ is our God and Savior. They may have been an imperfect foundation or the cornerstone of our church or other churches. Unfortunately, we may not be much better either. God used them just as He has used so many who have gone before them. All of the saints of past ages eventually became seniors, unless God took them home unexpectedly. Time has a way of humbling even the greatest of leaders.

If Jesus delays His coming long enough, you and I will some day be reflecting on the memories of how God once used us. No matter how much God will use us, eventually we will become old and our bodies will wrinkle if Jesus delays. Our legs will not be what they once were. Our eyes will not see as well to read those familiar pages of scripture. Our voices will no longer be able to sing solos as beautifully. We will eventually have trouble teaching Bible lessons and walking the streets to present the gospel. Some day we will not have the energy for certain ministries. Some day you and I will be seniors too!

Most senior saints served the Lord Jesus in a variety of ways in their younger years. They provided spiritual guidance in the home. Don’t they deserve our great respect? I believe that is why God wrote the following.

You shall rise up before the grayheaded and honor the aged, and you shall revere your God; I am the LORD. Leviticus 19:32 (NASB)

About one year ago a senior commented, “Seniors need a church too!” He was correct. Some seniors feel that the better years of life are gone and the better years of church life are gone too! Some seniors feel the disdain and slight rejection that occurs within their own church. They have come to accept the fact that the church no longer highly values them. Surely, you have heard that the church is looking for the younger people. Some churches are even less interested in them, except for their money and a number in the attendance count.

Wouldn’t it be great to honor our seniors as much as we do the younger generation? Shouldn’t the music be designed to provide a balance so that it ministers to them and also the younger generation? Maybe, just maybe we could turn down the music volume and sing some old hymns. Wouldn’t it be great to treat them as equals? How about a sermon on Sunday morning about honoring our seniors? I heard about a church youth group that would mow the front yards of their seniors several times per year. What an expression of honor. God calls us to honor our parents and other seniors too! There are many ways we can do that. Honoring our seniors honors God the Father – The Ancient of Days. He is the Senior of seniors.

Does Your Church Value Seniors? (PDF)