Men and women of all ages and classes have suffered as Christians: noble senators, educated bishops, nursing mothers, feeble men, respected teachers, young virgins, poor slaves, skilled craftsmen and honored pastors. The early Christians were severely tortured because they believed and followed Jesus. Society was not tolerant; it was offended. During the Decian persecution, A.D. 249-251, thousands of Christians were systematically persecuted. History tells us “Christians” and “pastors” were given the opportunity to renounce their faith, offer incense to other gods or give up their sacred books. Many did. Those who did were called the lapsi or the “Lapsed” because they had returned to paganism. Those who gave up their sacred books were called “traditores” or traitors. Meanwhile, history records that other Christians with whom they had worshipped died by fire and other exotic forms of death. Yet, when it was all over, the traitors and the lapsi sought restoration to the church.

Blessed are those who have been persecuted for the sake of righteousness, for theirs is the kingdom of heaven. Blessed are you when men cast insults at you, and persecute you, and say all kinds of evil against you falsely, on account of Me. Rejoice, and be glad, for your reward in heaven is great, for so they persecuted the prophets who were before you. Matthew 5:10-12 (NASB)

These two beatitudes promise Christians who have suffered for Jesus down through time a great reward in heaven. In the previous beatitude Jesus told us to be peacemakers with all men, including our enemies, but not to the point of compromise. In these two beatitudes, Jesus makes it clear that true Christians will suffer for holiness and because they follow Jesus.

What kind of persecution was Jesus talking about? Jesus was talking about ongoing, non-stop persecution that hurts body and pride. Jesus used a Greek word, dioko, which has the sense of being pursued and persecuted. It is a picture of someone who has been aggressively hunting you and they are still seeking you to hurt you. Have you ever been persecuted like this because you have tried to live a holy life – to do what Jesus wants of you? Today some Christians are too willing to be lapsi.

He is talking about those who are persecuted for holy living. Listen to 2 Timothy 3:12,

All who desire to live godly in Christ Jesus will be persecuted. 2 Timothy 3:12 (NASB)

God does not say that we must BE living a holy life. He says we will suffer if we DESIRE to live a godly life. Do you desire to flee immorality, sensuality, anger, and disputes (Galatians 5:19-21) and greed, strife, gossip, disobedience to parents, and haters of God (Romans 1:29-32)? God wants us to desire to be like Him. In 1 Peter 1:16 He says that He wants us to be like Him, “You shall be holy, for I am holy.” God wants your heart. He wants our heart to desire to be holy like Him. Flee sin by being filled with the Holy Spirit and by pursuing Him. Why do others hate Christians? Romans 1:32 says they want us to be like them! When we refuse to be evil, we are persecuted in different ways. Sometimes it is physical. Sometimes it is not.

The last beatitude in the Sermon on the Mount includes another form of persecution: curses, insults with insulting, evil language, and mockings. This is the meaning of the Greek word (oneidizo) for “insults.” This word was used in Matthew 27:44 to describe the abuse Jesus suffered from the robbers. It was abusive and unpleasant.

History says that John Huss (A.D. 1415) was burned at the stake because he believed the Bible was infallible, authoritative and supreme. He declared that Christ was the head of the church. Before he died he was urged to recant, and he replied, “What I taught with my lips, I seal with my blood.” Others have received insults, such as John Calvin, who was declared to be a legalist. Many Christians have been cursed and lied about for holding to the truth and following their Lord and Savior Jesus Christ. 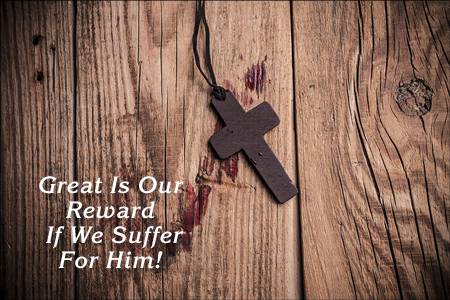 Heaven With A Reward

Many Christians since the time of Jesus have feared all forms of persecution. Some have reacted in anger and hostility. But God calls us to be at peace with others as much as possible (Romans 12:18) and never flinch from living a godly life (2 Timothy 3:12) or standing for and defending the truth of God (2 Timothy 2:1-3; 2 John). Just before Jesus’ death, He told His disciples they would suffer because the disciple is not greater than his master (John 15:18-19). Jesus’ point is that if He suffers, why should we feel that we should escape? Are we greater?

Christians do not like insults, rebukes, slander, anger, bad reports, rejection and persecution. This has always been true. It was true of Jesus’ disciples, and it was true of Joseph of Arimathea,

And after these things Joseph of Arimathea, being a disciple of Jesus, but a secret one, for fear of the Jews, asked Pilate that he might take away the body of Jesus. John 19:38 (NASB)

It has always been scary to be a Christian. After Jesus had been arrested, scripture says Peter denied that he even knew Jesus three times (John 18:15-27). Actually, Peter may have been the brave one because the other disciples just left (Matt 26:56). Christians have always been afraid to speak out because no one likes to be insulted or persecuted.

True Christians will suffer and there will be times we will become a secret disciple. But that does not please our Lord. The early church had a solution: they called it boldness. In Acts 4:29 they asked God for boldness,

Now, Lord, consider their threats and enable your servants to speak your word with great boldness. Acts 4:29 (NIV)

They prayed for boldness during persecution. They did not ask for it to stop. They ask for boldness to keep going. They chose suffering. But when it became intense, Acts 8:1 says they fled. They fled preaching the gospel just as Jesus had told His disciples (Matthew 10:23).

We need to ask the Holy Spirit for boldness (Acts 4:31) to live a righteous life. We need to commit ourselves to be bold and accept suffering for Jesus. Pray that God gives us boldness to not become lapsi, or yield to the spirit of tolerance, or anything that is contrary to holiness, truth and the pursuit of being like Jesus Christ. Imagine the great rewards that await us along with the other saints.