The Door and the Good Shepherd – Good Friday Service 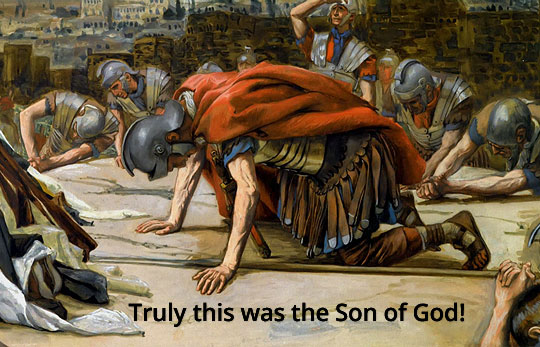 The centurion and those who were with him at cross were keeping guard over Jesus. When they experienced the earthquake they became very frightened and said, “Truly this was the Son of God!” You would not have expected that this soldier would have eventually believed Christ was the Son of God. I rather suspect that this soldier had seen and heard much about Christ. I doubt that this was not the first time he saw Christ. The gospels tell us that all of Jerusalem was abuzz about Christ (John 12:9-10, 17-18). People were hearing about Christ, His teachings, the healings, the wonders and signs, and all that was occurring. When this soldier sees Christ die on the cross he says, “This is the Son of God.”

Jesus Said We Are Sinners

On one occasion Christ called the crowds unbelieving. On another occasion He said that they were wicked. Each time He said it was because they were looking for a miracle, proof of who He was. On another occasion He called the people sinners. In John 8:24 He said that we will die in our sins unless we believe in Him. That was a potent statement. Do you know what Jesus was saying about us? He said we are sinners. He said we are in deep trouble. I do not know what you are thinking about the person next to you, but the people around you are sinners. We are all sinners. There are not good people. We’re told that on one occasion Jesus was talking to a man, and made the statement that there was only one who was good—God! Do you know that you are not good? I am not good? There is only one who is good—God. So when Jesus called us unbelieving, sinners, and wicked people, those are not terms that we usually like to identify with. We do not like bring called a wicked person. That is who we are without the Holy Spirit working in our life.

Parable of The Door

In John 10, Jesus makes a very interesting statement. He describes Himself as being the door.

I am the door; if anyone enters through Me, he will be saved, and will go in and out and find pasture. John 10:9 (NASB)

Now He adds that you will find pasture abundantly. That is the point. Have you ever heard the phrase that the Christian life is supposed to be abundant? The Good Shepherd gives abundant life. But in order to get it, you have to go through Christ. You must believe. You have to recognize that you are a sinner. You have to be repentant of your sins. You must recognize that you need to change, and God needs to transform you if you want to go to heaven.

Parable of The Good Shepherd

Jesus Will Lay Down His Life

Now I want you to hear two interesting verses. Notice what Jesus said,

For this reason the Father loves Me, because I lay down My life so that I may take it again. John 10:17 (NASB)

Did you notice what He said?! He said two things.

That is statement one. What is He going to do? He is going to lay down His life. Now listen to what He says,

Jesus says, “Nobody is forcing me to do this. I am doing it because I have the authority to do it. I want to.”

Jesus says He has authority to take His own life, and He has authority to raise Himself up again. Think about being dead and having the authority, the power, to raise yourself back to life. He is talking about His physical body, not His spirit, because all of our spirits live forever.

He is the Good Shepherd. It was planned, it was purposeful, He knew what He was going to do, and when He says He has authority to do it, and He did it, do you know what that means? He loves you. He loves me. That’s what it’s all about. It’s a tremendous passage of scripture, the Good Shepherd is telling us what He wanted to do and would do. Six months later He did lay down His life. Six months later He hung on a cross.

Six months later a crowd chose between Jesus and Barabbas. The crowd picked Barabbas and Jesus died on a cross. After Christ died the centurion believed in Jesus.

So the question tonight is, “Who do you believe Jesus is?” We have discovered that Jesus shed His blood on a cross. When Jesus died He made forgiveness of our sins possible if you believe that Jesus is God, just like the centurion, and believe that Jesus did everything was necessary so that you could be saved. If you repent of your sins and want God’s forgiveness so that you can go to heaven, ask Him to forgive you and give Him your life. The question tonight is what will you do? Jesus is the only Door to abundant pastures.