Jesus’ Cleansing of the Temple

Jesus Christ became my Savior and Lord when I was a young man. I will never forget sitting in church and hearing the preacher say, “Everyone thinks that you are a Christian, but you know that you are not one.” That stunned me into realizing that I was not really a Christian. One does not become a Christian by being born into a believing family, living in a “Christian” country, or by attending a church. I was attending church, living in a home with parents who were Christians, and living in a country where most people attended a Christian place of worship. But I knew I was not a Christian. Being a Christian is not about how you live. Some years ago a young woman said that she was “christian.” She used the word “christian” as an adjective. She was describing how she behaved. There are many good people who live better lives than some Christians, but still are not Christians. What is a Christian? This study will answer part of that question.

After the wedding at Cana, Jesus travelled down to Capernaum with His mother, and His brothers, and His disciples.

After this He went down to Capernaum, He and His mother and His brothers and His disciples; and they stayed there a few days.  John 2:12  (NASB)

Capernaum was located on the northwest coastline of the Sea of Galilee. Today, the city is in ruins and is being excavated by the Roman Catholic order of the Franciscans. The excavations started in A.D. 1905 and continue to this day. But in Jesus’ day it was a busy sea port town and was the home town of Jesus. Today the ruins of an old synagogue have been dug out of the grave of time. Is it possible that these ruins are the remains of the synagogue built by a Roman centurion who had asked Jesus to heal his servant (Luke 7:1-10)?

It appears that this is the time that Jesus moved His family from Nazareth to Capernaum. The family was relocating, and Capernaum would become their home. Since His “assumed-to-be” father, Joseph, was not mentioned, it appears that he is already dead. A few days later they travelled south to Jerusalem for the Passover.

The Passover of the Jews was near, and Jesus went up to Jerusalem. John 2:13  (NASB) 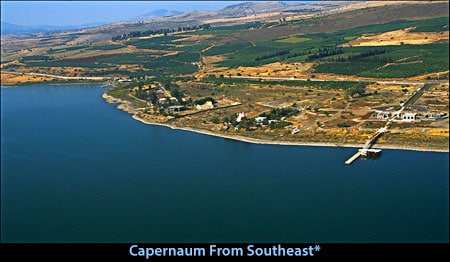 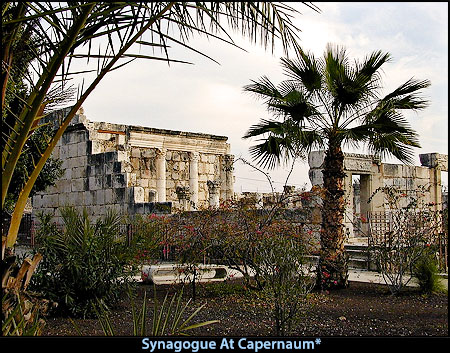 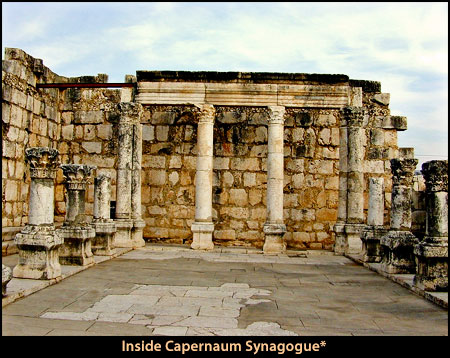 Since Capernaum is on the coastline of the Sea of Galilee, which is about 686 ft (209 m) below sea level, and since Jerusalem is at a higher altitude of about 2,300 ft (701 m), we are told that Jesus went “up” to Jerusalem. Passover occurs one time each year in the Jewish month of Nisan, which can occur in either late March or April. This means that the wedding at Cana probably occurred in March. The temperatures would have been about 60-70 deg. Fahrenheit (15-21 deg. Celsius).

And He found in the temple those who were selling oxen and sheep and doves, and the money changers seated at their tables. John 2:14  (NASB)

After Jesus arrived in Jerusalem for the Passover, He went to the temple. We call the temple King Herod’s temple since King Herod started the construction work. Sometimes it is also called the second temple, since King Solomon built the first one. 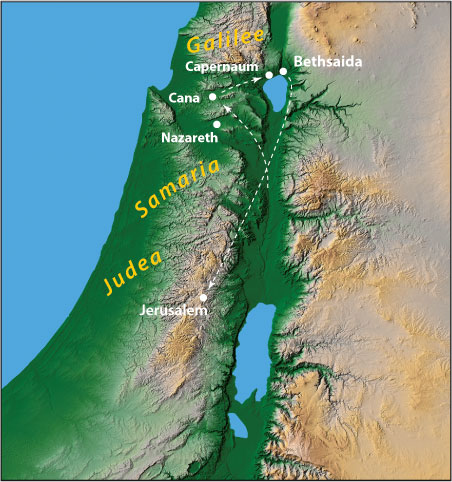 Court of The Gentiles

When Jesus arrived at the temple, He saw animals in the Court of the Gentiles (see the graphics on page 5). It must have looked like a barnyard with animals standing and moving, the cows mooing, the sheep bleating, the doves cooing, and with animal droppings here and there. The animals were there for the purpose of being sold by “salesmen” to pilgrims who had come for the Passover Feast who also wanted to offer a sacrifice. The animals were sold by priests who served at the temple. They would encourage the pilgrims to buy their products. We can only imagine if the “salesmen” had signs or if they were loudly encouraging others to buy. With hundreds of people in the court, it must have seemed like a circus.

When the pilgrims arrived at the Court of the Gentiles, their animals would be inspected by one of the priests. This priest was an inspector, called a mumcheh, or “one approved,” who would check to see if the animal was without flaw. It was common for this inspector to find a flaw in the animal. Then he would offer to buy the “inferior” animal from the offerer at a price below the market value. The offerer would then be encouraged to buy a “perfect” animal from one of the “salesmen.” But before one could purchase an animal, he or she had to convert currency into “temple money,” because only “temple money” was accepted by the “salesmen.” The money changer would assess a tax for converting the offerer’s money. The offerer would also have to pay a temple tax. Since the Sadducees, which included most of the priests, controlled the temple, this was a very profitable business for them. That is, they took advantage of the religious worshipers. This is what Jesus saw when He walked onto the Court of the Gentiles.

So Jesus made a whip from a group of smaller cords and went after these priests who justified their conduct by some self-imagined righteousness.

And He made a scourge of cords, and drove them all out of the temple, with the sheep and the oxen; and He poured out the coins of the money changers and overturned their tables; and to those who were selling the doves He said, “Take these things away; stop making My Father’s house a place of business.” John 2:15-16  (NASB) 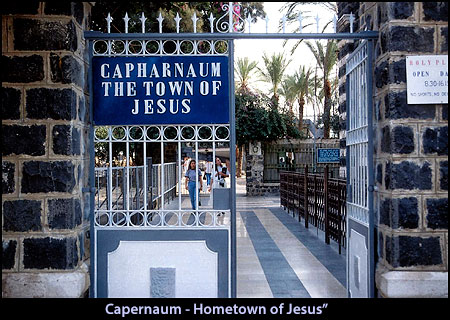 It is amazing how religious leaders justify their evil conduct using God’s Word. So Jesus started using the whip to drive the animals away and to scare the people out of the court. How would you respond to a man who was waving a whip at you? Most of us would walk or run away quickly. Jesus also poured the coins onto the ground and turned over the tables of the money changers. Some of the coins would be rolling along for awhile and fall flat. The clinking of coins, coins rolling along, the crashing of the tables to the ground, people yelling, and the hoofs of running animals would have been a scene to behold. Then Jesus responded with, “Take these things away; stop making My Father’s house a place of business.” Jesus’ behavior was holy. King David had predicted that He would do this,

His disciples remembered that it was written, “ZEAL FOR YOUR HOUSE WILL CONSUME ME.”  John 2:17  (NASB) 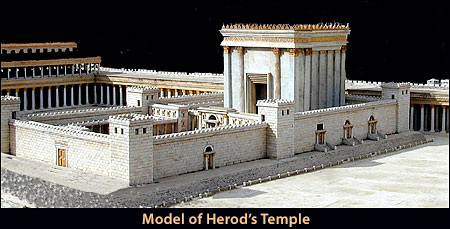 These religious leaders were wrong, but they did not care. They were not sensitive to their own sin. So they came to Jesus and challenged Him demanding to know by what authority He did this.

The Jews then said to Him, “What sign do You show us as your authority for doing these things?” John 2:18  (NASB)

We are told that “the Jews” were the ones who came to Jesus. The term “the Jews” refers to members of the Sanhedrin. They represented the greatest spiritual leaders of Israel at the time of Jesus. But these “great spiritual leaders” were not really interested in Jesus’ answer. They just wanted Jesus to stop. They were upset with Jesus. These “religious leaders” did not have a guilty conscience. They did not care that they were abusing people. They only cared about themselves. We know they were not sensitive to God because at the end of Jesus’ ministry He cleared the temple once again (Luke 19:45-46). Sinning religious leaders are probably the greatest sinners because their seared consciences have been warped in a sense that they are God’s servants. They take spiritual truth and convince people that their ungodly behavior is godly. They are not truly sensitive to God’s Spirit. 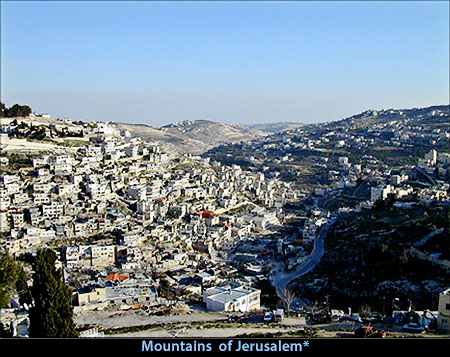 Jesus responds to these members of the Sanhedrin with the following statement,

Jesus was talking about His future death which would occur in about three years. It was His body that would be dead and three days later, according to the Jewish custom of counting days, He would return to life again.

So when He was raised from the dead, His disciples remembered that He said this; and they believed the Scripture and the word which Jesus had spoken. John 2:22  (NASB) 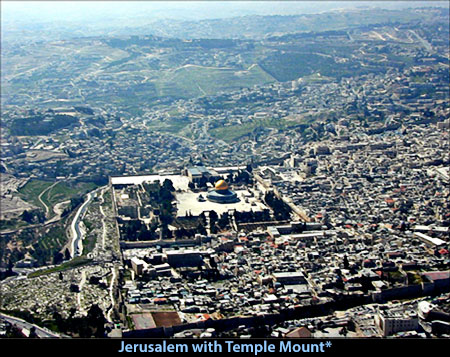 Finally, the Passover arrives and Jesus displays His glory through His miracles. Because of Jesus’ miracles many believed in Him.

Now when He was in Jerusalem at the Passover, during the feast, many believed in His name, observing His signs which He was doing.  John 2:23  (NASB)

But their faith was not deep. Yes, they believed that Jesus could do miracles, but they were not committed to Him, and Jesus knew this. Therefore, we are told the following,

But Jesus, on His part, was not entrusting Himself to them, for He knew all men, and because He did not need anyone to testify concerning man, for He Himself knew what was in man.  John 2:24-25  (NASB)

Jesus did not trust them. Their faith was weak.

Jesus arrived before the Passover to clean up the temple, and the self-justifying religious leaders refused to believe and respond to Him. Yet, the local residents and the pilgrims who came to Jerusalem responded in simple faith and believed in Him. Their faith was not deep, but it was real.

These Jews and Gentiles (non-Jews) responded to someone new. He was calling them to holiness. The religious leaders were interested in themselves and religious form. They wanted the submission and the praise of the people. They loved followers and the money that came with their adoration. Jesus in contrast was more interested in their hearts and holiness. He was not looking for a following, a crowd, or a crusade. He was interested in their belief. Did they believe in Him or not?

Do you believe? Are you more interested in religious form? Have you told yourself that you are okay with God? Are you like the religious leaders, or the pilgrims who realized that only God could do these miracles? If you are like the pilgrims, then believe in Him with all your heart.