Symptoms of a Problem

The introduction to Revelation has come to an end, and the Apostle John faithfully writes some words from our Lord to seven churches in Asia Minor. He sends a message to each church. Sometimes he gives words of encouragement, and at other times words of rebuke. Two of the seven churches receive only positive encouragement. but five of them are rebuked. These were real churches with real problems. These churches had problems just as we do today. The Lord’s warnings and encouragement to these seven churches are applicable to every church today. One of these churches probably compares to your church and to you. The first church our Lord writes to is Ephesus.

Our Lord’s first words to the Christians in Ephesus are a reminder that He is in control.

To the angel of the church in Ephesus write: The One who holds the seven stars in His right hand, the One who walks among the seven golden lampstands, says this . . . Revelation 2:1 (NASB)

Revelation 1:20 reveals that the seven stars are the pastors of the seven churches, and the seven lampstands are the seven churches. So Jesus is simply saying, “I am in control of each pastor and each church.” We will see in our coming studies of these churches that Jesus gives us freedom to do what is right or to commit sin. But He can destroy a church or bring blessings to it if He wants to. It depends on the people in the church and their leaders.

Ephesus was a harbor city near the Cayster River. It was the largest city in Asia Minor with a population estimated at 250,000. It was a great commercial center and had an amphitheater that could seat 24,000 people. 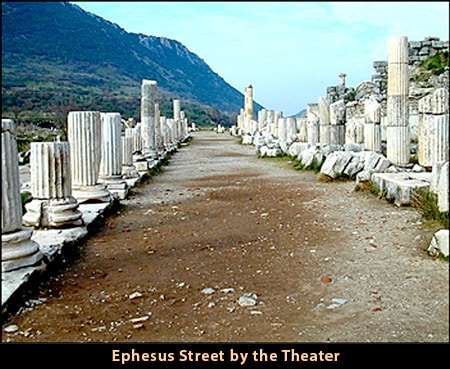 The city had many temples to various gods and goddesses. One such goddess was Artemis. Artemis was her Greek name, and Diana was her Roman name. Her temple was one of the Seven Wonders of the World. The temple was magnificent, with 127 columns which stood 197 feet high (60m). The temple measured 425 feet by 220 feet (130m x 67m), but today the temple is in ruins with only a single column remaining.

The Greeks believed that Artemis ruled the moon, was the goddess of the hunt, protected animals, and protected women during childbirth. She guarded three cities: Ephesus, Syracuse, and Massalia.

Her temple was a place of prostitution even though she was supposedly a virgin. The Ephesians highly respected her, even believing that her idol or image fell down out of heaven. We discover this in the book of Acts where we are told that a silversmith by the name of Demetrius was worried that his idol business would decrease when the Apostle Paul came telling others about Jesus. Listen to this,

For a certain man named Demetrius, a silversmith, who made silver shrines of Artemis, was bringing no little business to the craftsmen; these he gathered together . . . and said, “Men, you know that our prosperity depends upon this business. And you see and hear that not only in Ephesus, but in almost all of Asia, this Paul has persuaded and turned away a considerable number of people, saying that gods made with hands are no gods at all. And not only is there danger that this trade of ours fall into disrepute, but also that the temple of the great goddess Artemis be regarded as worthless and that she whom all of Asia and the world worship should even be dethroned from her magnificence.” And when they heard this and were filled with rage, they began crying out, saying, “Great is Artemis of the Ephesians!”. . . And after quieting the multitude, the town clerk said, “Men of Ephesus, what man is there after all who does not know that the city of the Ephesians is guardian of the temple of the great Artemis, and of the image which fell down from heaven? Acts 19:24-28, 35 (NASB) 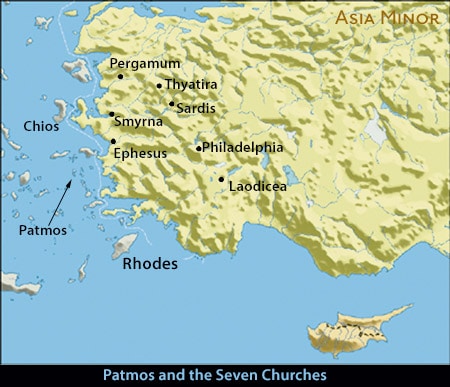 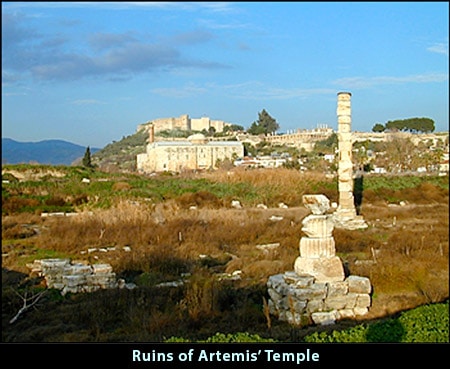 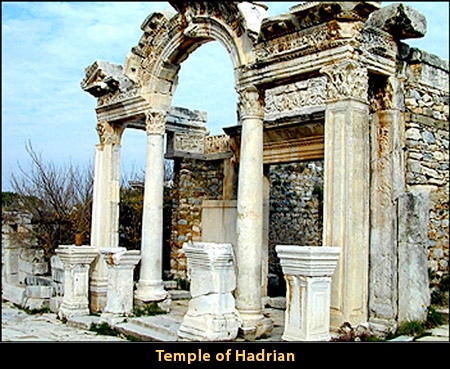 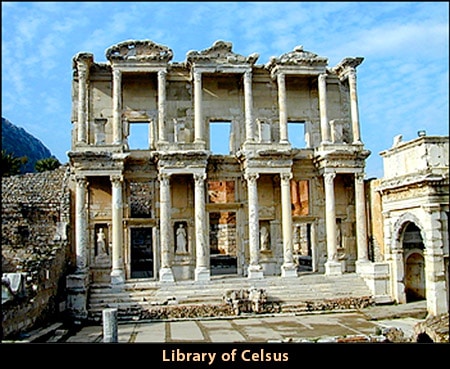 Another outstanding building in this city was the temple to Hadrian, a caesar of the Roman Empire. The city offered its citizens the Celsus library for the purpose of education. Some people think of the cities of the past and their citizens as being backward and living in poor conditions but the photographs of the ruins reveal that this is not true of Ephesus. Remember that Ephesus had one of the Seven Wonders of the World for the family to see on the weekend!

Jesus’ first words to the Ephesians are very positive. These are words that many of us would like to hear.

I know your deeds and your toil and perseverance, and that you cannot endure evil men, and you put to the test those who call themselves apostles, and they are not, and you found them to be false; and you have perseverance and have endured for My name’s sake, and have not grown weary. Revelation 2:2-3 (NASB)

These believers worked hard for Christ and continued even when trouble came to them. They did not grow weary. The Greek word for “grown weary” is kokopiakas. It means “to be spent with labor” or “to be faint from weariness.” But they were not weary! It is easy for a Christian to become weary in the Lord’s work when their effort is for the wrong reason. When we serve for position, honor, or to earn the respect of a pastor, church leader, spouse, or some friend, our labor becomes discouraging and weary. Why were the Ephesians not weary? They were serving for “My name’s sake.” They did it for Jesus! They did not do it for anyone else. Does that sound as though they loved Jesus? The answer is “yes!”

The Ephesian Christians did something that is not very popular today in some churches. They did not endure evil men, and they questioned the claims of their church members. It appears that they practiced church discipline and removed from the church those who were evil and those who claimed to be apostles. This means that they evaluated the live and claims of men and women in the church. Christians often struggle with church discipline. Church discipline is the removal of someone from the church who continue in sin. Jesus told His disciples to do this in Matthew 18:15-20. This was His idea. It simply means that if we see another Christian sinning, it is our responsibility to help him or her stop. It is helping another Christian to be holy, even as Jesus is holy (1 Pet. 1:16). It is not for judgment or to punish someone. The Ephesians were faithful to do this. They did not tolerate evil men and liars. Sometimes church discipline is limited to adultery, but not here at this church.

Yet this you do have, that you hate the deeds of the Nicolaitans, which I also hate. Revelation 2:6 (NASB)

The Ephesians also hated the deeds of the Nicolaitans, a group of people who pursued pleasure. One of the early church fathers, Clement of Alexandria, said of the Nicolaitans ” . . . abandoning themselves to pleasure like goats . . . lead a life of self-indulgence; not knowing that the body is wasted . . . while their soul is buried in the mire of vice; following as they do the teaching of pleasure itself . . . ” (The Stromata, Or Miscellanies, Book 2, chap. 20). The Nicolaitans lived for pleasure. We see that in our world. The pursuit of pleasure is even common in the church, but it was not among the Ephesians.

But there was a problem in the Ephesian church.

But I have this against you, that you have left your first love. Remember therefore from where you have fallen, and repent and do the deeds you did at first; or else I am coming to you, and will remove your lampstand out of its place–unless you repent. Revelation 2:4-5 (NASB)

They had left their first love. What does this mean? We already know that they had worked very hard for Jesus and had not grown weary. Did they disappoint the Lord by not working hard enough? The answer is found in Jesus’ warning to “repent and do the deeds you did at first.” Those words are easy to miss. It is easy to jump to the conclusion that Jesus was simply disappointed that they did not love Him enough. Their deeds were missing because their love was missing.

One evening, I climbed into my car and inserted the key to start my car. Nothing happened. So I tried again, and still nothing happened. I raised the hood of my car, and someone was kind enough to stop and help me start my car. Then I discovered the problem was my battery. The fact that my car would not start was the symptom and not the problem. The real problem was my battery. So it is with the Ephesians. The problem was their hearts’ love for Jesus, and the symptom was the absence of some deeds they used to do!

When men and women first became Christians in the early church, we are told that they . . .

. . . were continually devoting themselves to the apostles’ teaching and to fellowship, to the breaking of bread and to prayer. And everyone kept feeling a sense of awe . . . Acts 2:42-43 (NASB)

But some of the other books in the New Testament such as 1 and 2 Corinthians and Hebrews tell us that the desires for teaching, communion, prayer, and love for one another did not last. Prayer was not very important after awhile. Evangelism was not very important either. At first the early Christians preached Christ with boldness and willingly suffered persecution. What were the symptoms at Ephesus? What was missing in their Christian life? While we do not know the symptoms, we do know that the problem was in their hearts. They did not love Jesus enough. 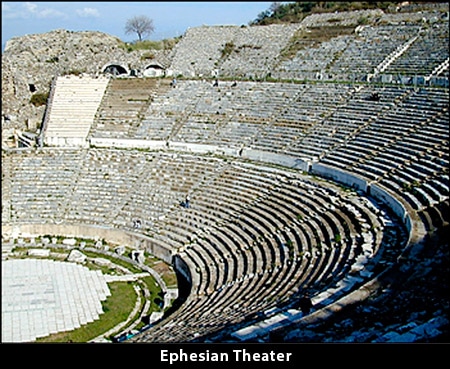 They had a heart problem. Do you have a heart problem? The way to discover if you have a heart problem is to ask, “What are my symptoms? What is missing from my life that I used to do for Jesus?” The answer will be different for each of us. Whatever your symptoms may be, Jesus has told us that the cure for your heart problem starts with repentance and then doing those things that are missing. It starts by admitting to Jesus that you do not love Him as you used to! Ask Him to help you love Him.

When we first came to Jesus, we wanted to please Him. He was all that we could think about. He was all that we wanted. We wanted to do His will. We were in love with Him. But as time passed the Ephesians started loving other things. Is there anything in this world that you would rather do than love Jesus with all your heart? The Ephesians had apparently found something else. Have you? The issue is not what are you doing for Jesus, but are you doing the “first things?” Are you doing those things that you know that Jesus wants you to do for Him? Are you in love with Jesus? We are told that Augustine once said, “Lord, have You declared that no man can see Your face and live? – then let me die, that I may see You.” Augustine loved Jesus! What are your symptoms?

He who has an ear, let him hear what the Spirit says to the churches. To him who overcomes, I will grant to eat of the tree of life, which is in the Paradise of God. Revelation 2:7 (NASB)