Contrary to the Word of God, many churches and synagogues call the man who preaches Sunday after Sunday their pastor, rabbi, or priest. In the Christian Church, in addition to the preacher, there are usually other leaders such as elders, deacons, or trustees. The one leader is sometimes called reverend, which means in English “worthy of reverence” while the other leaders are called laymen. We honor the one and ignore the others. Yet, Jesus told us not to do this in Matthew 23:6-12. He said the Gentiles seek this type of honor. He told us not to call one person our teacher, father or leader. Yet we do! When we come to the New Testament, we usually focus on God the Son and God the Holy Spirit and rarely on God the Father. We hear very little about God the Father. I have never seen a Christian book nor heard a sermon about God the Father. We usually talk about Jesus or the Holy Spirit. Have you ever wanted to know more about God the Father? If so, you can find Him in the passage we are about to study.

Actually, God the Father has been present in the book of Hebrews since the first verse. He has been talking to us as well as warning us. In the first verse, He tells us that He had spoken through His prophets, and now through Jesus.

God, after He spoke long ago to the fathers in the prophets in many portions and in many ways, in these last days has spoken to us in His Son . . . Hebrews 1:1-2 (NASB)

In Hebrews 5:6 we are reminded that even though He established the Levitical priesthood, He declared Jesus to be a priest after the order or rank of Melchizedek. This was God’s decision and His creation.

He says also in another passage, “THOU ART A PRIEST FOREVER ACCORDING TO THE ORDER OF MELCHIZEDEK.” Psalm 110:4 and Hebrews 5:6 (NASB)

In Hebrews 8:6-13 we were reminded again that God the Father had planned to replace the Old Covenant, the Mosaic Law, with the New Covenant.

For finding fault with them, He says, “BEHOLD, DAYS ARE COMING, SAYS THE LORD, WHEN I WILL EFFECT A NEW COVENANT WITH THE HOUSE OF ISRAEL AND WITH THE HOUSE OF JUDAH . . .” When He said, “A new covenant,” He has made the first obsolete. But whatever is becoming obsolete and growing old is ready to disappear. Hebrews 8:8, 13 (NASB)

In Hebrews 9 we found that the Tabernacle and the sacrifices were only a shadow of the real tabernacle in heaven and a picture of Jesus. We found that 1) Jesus’ blood did more than the blood of animals; 2) Jesus’ blood installed the Father’s New Covenant, and 3) His sacrifice was perfect. Since the first chapter the Holy Spirit has been laying a foundation of doctrine. He prepared us for the conclusion in chapter ten. Here we will see God the Father in action in two major ways. He has been the Designer all along. What we will see now may be a surprise. 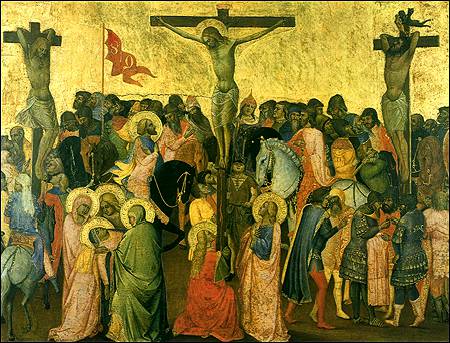 The Holy Spirit will now add to His conclusion at the end of chapter nine.

For the Law, since it has only a shadow of the good things to come and not the very form of things, can never by the same sacrifices year by year, which they offer continually, make perfect those who draw near. Otherwise, would they not have ceased to be offered, because the worshipers, having once been cleansed, would no longer have had consciousness of sins? But in those sacrifices there is a reminder of sins year by year. For it is impossible for the blood of bulls and goats to take away sins. Hebrews 10:1-4 (NASB) 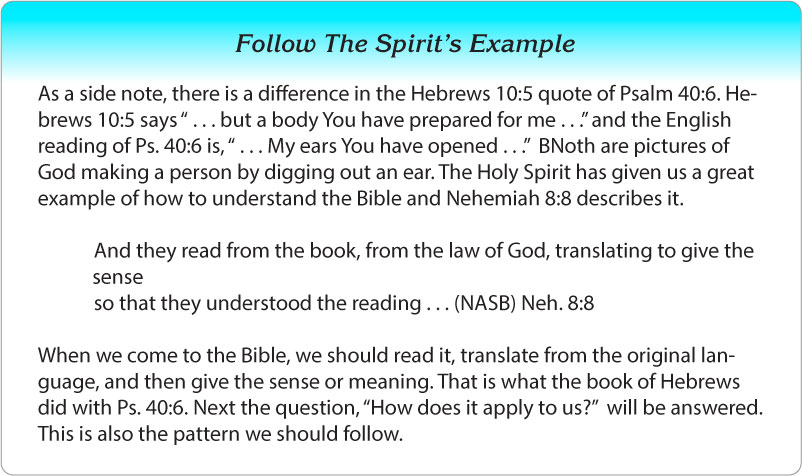 Therefore, when He comes into the world, He says, “SACRIFICE AND OFFERING THOU HAST NOT DESIRED, BUT A BODY THOU HAST PREPARED FOR ME; IN WHOLE BURNT OFFERINGS AND sacrifices FOR SIN THOU HAST TAKEN NO PLEASURE. “THEN I SAID, ‘BEHOLD, I HAVE COME (IN THE ROLL OF THE BOOK IT IS WRITTEN OF ME) TO DO THY WILL, O GOD.'” Hebrews 10:5-7 (NASB)

Here is another proof that the Mosaic Law had to disappear. God the Father did not like the sacrifices! He took no pleasure in them. He wanted our hearts more. So Jesus came into this world to establish the New Covenant and remove the Old Covenant.

Those who say that we should obey the Mosaic law have missed the Holy Spirit’s message. The sacrifices, the Tabernacle, the priesthood, the ceremonial law were only a shadow or a picture of the Father’s future. The Father did it to show us that we were sinners and to lead us to Jesus. So He wanted Jesus to come and eliminate the Mosaic law and bring us eternal forgiveness. So Jesus did!

After saying above, “SACRIFICES AND OFFERINGS AND WHOLE BURNT OFFERINGS AND sacrifices FOR SIN THOU HAST NOT DESIRED, NOR HAST THOU TAKEN PLEASURE in them” (which are offered according to the Law), then He said, “BEHOLD, I HAVE COME TO DO THY WILL.” He takes away the first in order to establish the second. Hebrews 10:8-9 (NASB)

The Father wanted Jesus’ death – His sacrifice – so that He could finally forgive our sins. This is called ultimate sanctification.

By this will we have been sanctified through the offering of the body of Jesus Christ once for all. Hebrews 10:10 (NASB)

And every priest stands daily ministering and offering time after time the same sacrifices, which can never take away sins; but He, having offered one sacrifice for sins for all time, SAT DOWN AT THE RIGHT HAND OF GOD, waiting from that time onward UNTIL HIS ENEMIES BE MADE A FOOTSTOOL FOR HIS FEET. For by one offering He has perfected for all time those who are sanctified. Hebrews 10:11-14 (NASB)

The contrast here is spectacular. The Greek implies that the priests are standing, ministering and offering constantly without interruption. They are doing this over and over again and accomplishing nothing. They are offering sacrifices that never really take away sins. They are working hard and getting nowhere; but Jesus came, died, and sat down. Wow! The priests are pictured as standing and standing, but Jesus is sitting down. The priests were constantly ministering, but Jesus did it once and sat down. Why can Jesus sit down? 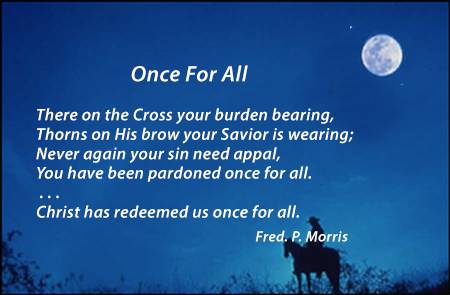 Did you notice that the Father is the One Who wanted to sanctify us – to forgive our sins? He did – once for all! The Greek verb tense for “perfected” in verse 10 is a perfect passive participle. First, this means the Father, not ourselves, sanctified us. We did not do anything. Second, it means that our sins were forgiven in the past, our sins are still forgiven, and our sins will be forgiven in the future. We were sanctified once for all. It is done. It is over. Those who trust in or depend on Jesus to forgive their sins have them forgiven forever. The purpose of Jesus’ death was simple. It is called eternal forgiveness.

And the Holy Spirit also bears witness to us; for after saying, “THIS IS THE COVENANT THAT I WILL MAKE WITH THEM AFTER THOSE DAYS, SAYS THE LORD: I WILL PUT MY LAWS UPON THEIR HEART, AND UPON THEIR MIND I WILL WRITE THEM,” He then says, “AND THEIR SINS AND THEIR LAWLESS DEEDS I WILL REMEMBER NO MORE.” Hebrews 10:15-17 (NASB)

Jesus’ death accomplished something the animal sacrifices could not do – forgiveness forever, total forgiveness. There are some who say that we can lose our salvation, or become apostates after being forgiven. This is not what Hebrews says. If it is possible that we can lose our salvation and then need our sins forgiven again, then Jesus’ death was not good enough. The Holy Spirit makes it clear,

Now where there is forgiveness of these things, there is no longer any offering for sin. Hebrews 10:18 (NASB)