Will the two witnesses appear in the first half of the tribulation?

I was looking at your interpretation of Revelation 12 about the signs and the two witnesses. According to the scripture, there is no biblical support as to when the two witnesses appear. In fact, it makes more sense for the two witnesses to appear in the first part of tribulation than the second half, if they are to prophecy for three and half years. Then they would not be killed because Christ would have returned by then.

The study that you refer to is called the “Illusion of Freedom.” That study is concerned with the prophecy of the two witnesses given in Revelation 11. Before answering your question, we will provide some background information.

The Bible tells us that the first half of the Tribulation period is characterized by peace (Daniel 9:27). An overview of the end times is given in the book of Revelation with the introduction of the seven seals (Revelation 6). The first of the seven seals is symbolized by a white horse – peace! Please visit the study “The Seals” for an explanation. The following timeline illustrates the sequence of the seven seals. 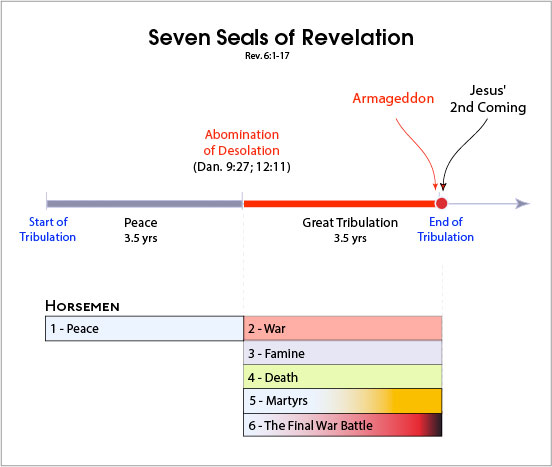 The remaining six of the seven seals is not about peace. Notice that the second half is characterized by war and terror. The first half is a 3.5 year period and the last half is a 3.5 year period. This means that the first 3.5 years is peaceful, but not the second half. Consistently, the three phrases “forty-two months,” 1,260 days” and “times, time, and half-time” are used in reference to the time the anti-Christ dissolves world peace and makes war against the Jews and Christians. This agrees with the prophecy given by Daniel (see Daniel 9:27). Please see the study “The Evil Messiah” for an explanation.

The vast majority of the book of Revelation is given to a description of a terrible period of time – the tribulation (chapters 6-18). With that as a background, we can now find the answer to your question which is found in Revelation 11:5-6.

And if anyone wants to harm them, fire flows out of their mouth and devours their enemies; so if anyone wants to harm them, he must be killed in this way. These have the power to shut up the sky, so that rain will not fall during the days of their prophesying; and they have power over the waters to turn them into blood, and to strike the earth with every plague, as often as they desire. Revelation 11:5-6 (NASB)

If the two witnesses were present during the first 3.5 years of peace, why would their lives be in danger? The dangerous period occurs during the last part of the tribulation – not the first part. Also, note that when the two witnesses are finally killed by the beast (Rev. 9:1-2; 13:1-2) the entire world rejoices. Why would this occur during a time that God predicts will be a time of peace?

It is also important to note the two phrases “forty-two months” and “1,260 days” in Revelation 11:2-3. Forty-two months is three and one-half years or 1,260 days if we use the biblical month of 30 days. Please see the study “Prophecy of Daniels’ 70 Weeks” for an explanation of the 30 days per biblical month. Forty-two months is also referred to as “times, time, and half-time” in Daniel 7:25 and Revelation 12:14. Together, the three phrases are important since they repeatedly appear in Revelation 11:2, 3; 12:6, 14; and 13:5. Since every reference to a 3.5 year period in the book of Revelation is always to the last half of the tribulation (see Rev. 12:6-17 and 13:1-18), this implies that the two witnesses, who appear in Revelation 11, are alive in the last half of the seven year tribulation.

Therefore, it seems best to understand that the two witnesses are present during the last of the tribulation and not during a time of peace.