Will God punish us if we have wrong attitudes in trials?

Will God punish us if we have wrong attitudes in difficult trials? During the heat of the battle, does the Lord always hold our attitudes against us while waiting for His rescue?

Scripture teaches that God knows our thoughts and the intentions of our hearts (Genesis 6:5; 8:21; Psalm 94:11; 139:23; Isaiah 66:18). Consequently, God knows our attitudes also.  This brief study is concerned with the question, “Will God punish us if we have wrong attitudes during trials?” 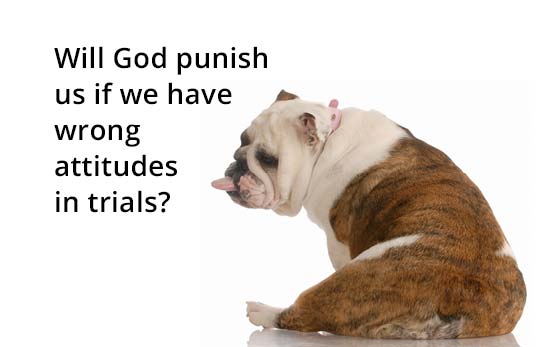 Suffering Due To A Wrong Attitude

In Hosea 4:7-10 we find an example of God causing suffering because the attitude of the priests of the nation of Israel was wrong. God’s opening rebuke is that as they had sons and daughters, they too sinned against God. They wanted to sin! Therefore, God would punish them for their sin!

The more they multiplied, the more they sinned against Me;
I will change their glory into shame.
They feed on the sin of My people
And direct their desire toward their iniquity.
And it will be, like people, like priest;
So I will punish them for their ways
And repay them for their deeds.
They will eat, but not have enough;
They will play the harlot, but not increase,
Because they have stopped giving heed to the LORD.
Hosea 4:7-10 (NASB)

Now notice that God said they “directed their desire toward their iniquity.” God knew their attitude;  because their attitude was wrong, God would punish them. They would suffer because they had a wrong attitude.

Suffering Will Continue Due To A Wrong Attitude

The book of Malachi is an open rebuke to the priests of the nation of Israel because they did not love God (Malachi 1:2) and their worship was ritualistic and empty. The first chapter describes their ritualistic, heartless and disrespectful worship (Malachi 1:6-14). We are told that they offered inferior sacrifices rather than the best to God while offering the best to their governor. Verse 13 reveals they complained about the sacrifices they were offering to God.

“You also say, ‘My, how tiresome it is!’ And you disdainfully sniff at it,” says the LORD of hosts, “and you bring what was taken by robbery and what is lame or sick; so you bring the offering! Should I receive that from your hand?” says the LORD. Malachi 1:13 (NASB)

In Malachi 2 the priests were rebuked again. Here are the opening verses of the chapter.

“And now this commandment is for you, O priests. If you do not listen, and if you do not take it to heart to give honor to My name,” says the LORD of hosts, “then I will send the curse upon you and I will curse your blessings; and indeed, I have cursed them already, because you are not taking it to heart.” Malachi 2:1-2 (NASB)

Notice that God warns the priests to give Him honor. If they did not listen and take His warning to heart they would be cursed. The Hebrew word for “curse” means “curse.” That is the most accurate translation. Then He tells them that He had already cursed them because He knew their attitude. They were not taking God’s warning to heart. The Hebrew word for “cursed” is in the perfect tense, which means that the curse had already started before this warning was given. Malachi 2:13 and 3:9 reveal that the curse was already in process when the book of Malachi was written. Notice that they were crying, weeping and groaning because God was not approving of their offerings.

And this second thing you do. You cover the LORD’s altar with tears, with weeping and groaning because he no longer regards the offering or accepts it with favor from your hand. Malachi 2:13 (ESV)

They had a wrong attitude in the midst of the curse. They only cared about their own suffering and not how they were treating God. Malachi 3:9 communicates the same problem. It also shows they were self-centered.

Scripture teaches that God not only looks at our behavior, He also observes our hearts (thoughts, attitudes and emotions). Remember that God chose David to be king over Israel because He knew David’s heart (Acts 13:22).

Scripture teaches that we are to have positive attitudes toward God in all that we do for Him. First and foremost, we are told to love Him with our entire self (Deuteronomy 6:5; Matthew 22:37-38). Another example is that the elders of the church are to serve with eagerness and voluntarily (1 Peter 5:2). Another example is that we are to obey the Lord because we want to please Him (Colossians 1:10). God is looking at our attitudes. 1 Corinthians 4:5 reveals that our future rewards will be based on our motives. We cannot escape God’s “observing eyes!” Proverbs 15:3, 11 teach that God sees everything, including the hearts of men!

Finally, James 1:2-4 states that we are to choose to be joyful in the midst of suffering because God uses suffering  to cause us to become more like Christ. Christians should realize that God will bring suffering into their lives for a variety of reasons. While our sufferings are not enjoyable, we are commanded to have a joyful attitude toward them since God uses them for our spiritual growth.