Many want to know if holy angels from heaven have been assigned to every person on earth. People also want to know who takes us to heaven when we die? Do guardian angels take us to heaven? The purpose of this article is to answer these questions. 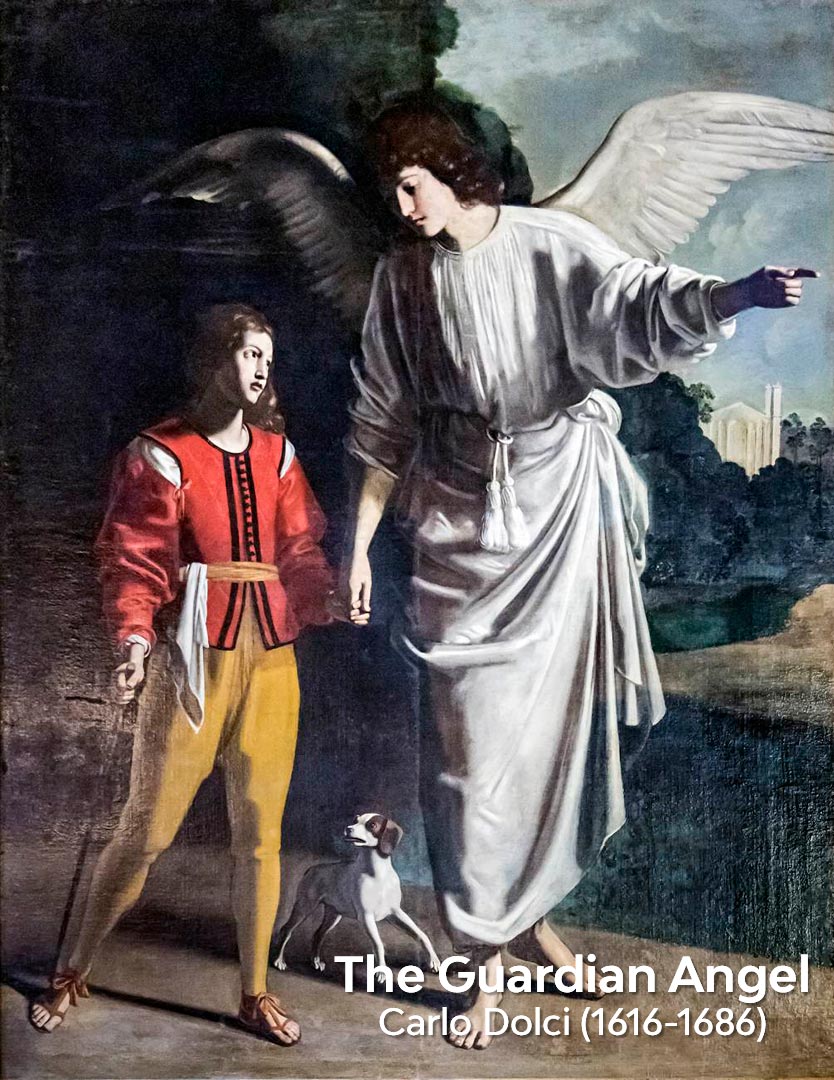 Do We Have Guardian Angels?

Some people believe that Jesus said “little ones” or children have angels who care for and protect them because of Matthew 18:10.

See that you do not despise one of these little ones, for I say to you that their angels in heaven continually see the face of My Father who is in heaven. Matthew 18:10 (NASB)

Angels Are In Heaven

The first reason why it is an error to conclude that we have guardian angels is that contrary to popular belief, the angels are not staying near to us. They are not standing or floating in the room watching us. They are not floating near  or inside our car protecting us from an accident or guarding us when we walk down a dark street at night or sleep at night. Why? Jesus clearly states that the angels are in heaven and not here on planet earth near us.

Third, notice that we are never told each individual person has one angel assigned to him or her. Instead, we are told “their angels.” That is, “little ones,” which suggests that adults also, have more than one angel watching them. The word “their” implies some angels are assigned to individuals. But “their angels” may refer to a large group of angels who watch us. We do not know how many angels constitute “their angels.” We must be careful to read the verse accurately and not claim that we have one or two “guardian angels.” The verse never tells us that.

John MacArthur makes this comment about the angels in Matthew 18:10,

Now let me tell you what this verse doesn’t mean. It doesn’t mean that every little baby has a guardian angel for two reasons: first of which, it doesn’t say that; second of which, it isn’t talking about physical babies. It also does not mean that every single Christian has his own personal angel; it doesn’t say that either. It just says their angels, collectively, are in heaven standing in the very presence of God. They are the angels of His presence. They are the holy angels who have access to His throne. They behold His face. And those angels have as their special assignment the care of God’s little ones. That’s all it’s saying.[1]

In addition, angels must travel from heaven to earth. This takes time. We are never told that an angel can race from heaven to earth and stop someone from murdering a person. For example, we are told in Daniel 10:2-3, 10-14 that the prophet Daniel had been praying. It was twenty-one days later that an angel finally arrived to answer his prayer request. He had been delayed waging war with an evil angel.  This account reveals that a holy angel may be delayed by an evil angel in arriving to help.

Yet, Hebrews 1:4 tells us that angels minister to believers.

Are they not all ministering spirits, sent out to render service for the sake of those who will inherit salvation? Hebrews 1:14 (NASB)

This is encouraging. Yet, Scripture does not reveal the details of how these angels minister to believers. However, it is clear that they do care for us in some way. John MacArthur makes this comment about the angels,

Hebrews 1:14, angels are sent as ministering spirits to minister to the saints. “So their angels in heaven continually behold the face of My Father who is in heaven.” What in the world is that about? The picture is very dramatic. God is in heaven. The image is the angels assigned by God to the care of believers are in heaven and they’re watching the face of the Father so that when the Father demonstrates concern over how His little ones are being treated, they can be dispatched from heaven by the Father to the aid of His own children. Which means that the children of God has His full attention and His concern becomes the concern of His holy angels. That’s an amazing thing.[2]

The angel of the LORD encamps around those who fear him, and delivers them. Psalm 34:7 (NASB)

It is also important to know that the concept of two angels being assigned to every individual appears in Jewish writings.[3]  That is, the concept appears to have originated from the Jews, and has infiltrated Christian thinking. We must remember that this Jewish belief is not inspired nor is it found in the Bible.

Who Takes Us To Heaven?

Those who claim that angels take believers to heaven refer to Luke 16:22 which says,

Now the poor man died and was carried away by the angels to Abraham’s bosom; and the rich man also died and was buried. Luke 16:22 (NASB)

Luke 16:22 is part of a story called “Lazarus and the Rich Man.” If we read this story carefully, we discover that this story does not agree with other passages in the New Testament. For example, verse 23 refers to Hades and then the story implies that the rich man is in the lake of fire. But Hades is not the lake of fire. Scripture reveals that Hades is generally referred to as the place of the wicked dead. Later after the wicked are judged, Hades will be thrown into the lake of fire (Revelation 20:14). That is, only in this story is Hades assumed to be the lake of fire.  A second problem with this story is that “Abraham’s bosom” is treated as if it were heaven. There are other issues, but these two problems are sufficient to reveal that this story is actually a parable and not a true account from  historic or real life. A parable is defined as an allegory or an illustration. Typically, this story is called a parable because the details are not all factual.

Therefore, we do not know that the poor man was taken to heaven by any angels. If we assume that every statement in the parable is true, then we must notice that “the angels” took the poor man to Abraham’s bosom. That is, we do not know how many angels were involved. Does “angels” refer to two angels, or more angels? The objective truth is we do not know how many angels. If angels do take believers to heaven, Hebrews 1:14 would suggest that God the Father would command one or more angels each time to carry believers to heaven.

When studying the Bible, we must be careful to not find meaning in a verse that does not exist. One author quoted a long list of verses that referred to angels caring for people. Then they argued the verses proved we have angels to care for us. But that conclusion cannot be supported by a clear statement  in Scripture that each individual has one or more particular angels assigned to them. Nor, can we find verses that say they remain or stay with us here on earth. So, do we have a guardian angel who takes us to heaven? The answer is there are no definitive statements in Scripture that say there are angels to carry us to heaven,

Who takes us to heaven when we die? The best answer is given in 2 Corinthians 5:6, 8. Verse 8 says that when we die, we are at home with the Lord.

Therefore, being always of good courage, and knowing that while we are at home in the body we are absent from the Lord . . . 2 Corinthians 5:6 (NASB)

Now if holy angels carry believers to heaven. can you imagine how many evil angels (demons) would try to prevent that from happening? We can imagine that those battles could be lengthy! But Paul said, “Absent from the body and . . . at home with the Lord.” Now that sounds like an immediate transition!

Parable of the Rich Man and Lazarus
How many angels were at the tomb of Jesus after His resurrection?
Angels – Good and Evil
Are some demons more powerful than some holy angels?
Can fallen angels look like humans? – What can demons look like?
Invisible Angelic Powers
Is Satan an angel?
Do angels have a will?