Are some demons more powerful than some holy angels?

Are some demons more powerful than some holy angels?

The Bible teaches there are two major categories of angels: evil angels and holy angels. Initially, God created all angels as holy angels. But Isaiah 14:12-19 and Ezekiel 28:11-17 helps us understand that Satan sinned and one-third of the angels of heaven joined him in rebellion against God.  (Revelation 12:3-4). The question we are concerned with is, “Are some demons or evil angels more powerful than some holy angels?” 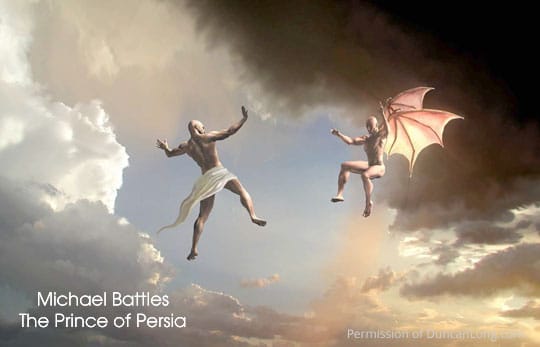 The Bible also teaches that there are other cherubim in heaven. The first time cherubim appear in the Bible is Genesis 3:24 when they prevent anyone from touching the Tree of Life. In Psalm 80:1 and 99:1 the psalmist says that God is enthroned above the cherubim. Cherubim are described as appearing as sapphire stones and having wheels beneath them  (Ezekiel 10:1-2). Their appearance includes something like hands, a back, four faces and wings (Ezekiel 10:7-8, 12, 14). They have eyes all around (Ezekiel 10:12). They can move extremely fast in any direction instantaneously (Ezekiel 10:11).

Seraphim appear only in Isaiah 6:2, 6. They are described as having six wings, a face and feet. We do not know how they compare to cherubim. These angels announce the holiness of God.

And one called out to another and said,
“Holy, Holy, Holy, is the LORD of hosts,
The whole earth is full of His glory.”
Isaiah 6:3 (NASB)

The name archangel seems to imply that an archangel is the most powerful of angels. Michael is the only angel named in Scripture as an archangel (Jude 9). Some claim that there are other archangels, but Scripture does not name any others.

In Revelation 4:6-8 we are introduced for the first and last time to another type of angel called four living creatures. They have six wings and four different faces that appear to like that of a lion, calf, man and an eagle. They are full of eyes and worship God day and night.

And the four living creatures, each one of them having six wings, are full of eyes around and within; and day and night they do not cease to say, “HOLY, HOLY, HOLY is THE LORD GOD, THE ALMIGHTY, WHO WAS AND WHO IS AND WHO IS TO COME.” Revelation 4:8 (NASB)

But the prince of the kingdom of Persia was withstanding me for twenty-one days; then behold, Michael, one of the chief princes, came to help me, for I had been left there with the kings of Persia. Daniel 10:13 (NASB)

Daniel 10:13 also reveals that within Satan’s kingdom, some of his evil angels or demons rule over the various nations. Here one evil angel is called the prince of Persia. Notice that when Michael arrived, he rescued an angel that had less power. Then in Daniel 10:20-21 this less powerful angel reveals there is another demon called the prince of Greece. These princes of the nations are called “forces.” Michael can defeat them.

Then he said, “Do you understand why I came to you? But I shall now return to fight against the prince of Persia; so I am going forth, and behold, the prince of Greece is about to come. However, I will tell you what is inscribed in the writing of truth. Yet there is no one who stands firmly with me against these forces except Michael your prince.” Daniel 10:20-21 (NASB)

In 2 Peter 2:10b-11 we are told that some holy angels are more powerful than some angelic majesties (evil angels or demons).

Daring, self-willed, they do not tremble when they revile angelic majesties, whereas angels who are greater in might and power do not bring a reviling judgment against them before the Lord. 2 Peter 2:10b-11 (NASB)

In Revelation 12:7-8 we read that during the tribulation period, Satan will attempt to conquer God and the angels of heaven. Why will he try to defeat heaven? Maybe he knows that he is doomed and, therefore, makes one last attempt to save himself. Nevertheless, the passage teaches that evil angels will fight against the holy angels. It will be Satan’s army of evil angels against Michael’s army of holy angels and Michael’s army wins. The holy angels are more powerful than the combined army of demons.

Revelation 20:10 states that the devil or Satan will be thrown into the lake of fire at the end of the age. He will remain there for eternity. If the leader of the evil angels is tossed into the lake of fire, it is safe to conclude that his followers will join him. Romans 16:20 speaks of the his ultimate defeat. It says, “The God of peace will soon crush Satan . . .”

Is there a difference between angels, hosts and armies?
Is Phanuel an angel? The Book of Enoch refers to the angel Phanuel.
What is the meaning of the dragon in the Bible?
Is it bad for Christians to be interested or involved in the occult?
Where did Satan come from? – Creation and Fall of Satan
Why did God allow Satan to live and do what he does?
Do angels have a will?
Does the Bible say there are male and female angels?