Where did Judas hang himself?

Where did Judas hang himself? Was he in the field or in a small side street? Did his body decompose and fall or was it taken down?

The books of Matthew and Acts tell us what happened to Judas after he betrayed Jesus. Matthew records the following:

Then when Judas, who had betrayed Him, saw that He had been condemned, he felt remorse and returned the thirty pieces of silver to the chief priests and elders, saying, “I have sinned by betraying innocent blood.” But they said, “What is that to us? See to that yourself!” And he threw the pieces of silver into the temple sanctuary and departed; and he went away and hanged himself. (NASB) Matt. 27:3-5 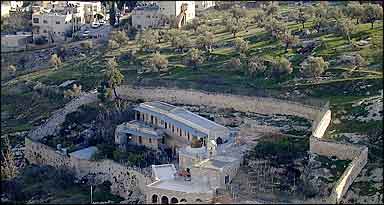 Then in Acts we read how Judas died.

. . . falling headlong, he burst open in the middle and all his intestines gushed out. And it became known to all who were living in Jerusalem; so that in their own language that field was called Hakeldama, that is, Field of Blood. (NASB) Acts 1:18-19

So Judas hung himself and apparently the rope broke. He fell on some rocks and his stomach burst open. He died in a field called the Field of Blood or Hakeldama.