What was the Sanhedrin Council? Who were the members?

What was the Sanhedrin Council? Who were the members?

What was the Sanhedrin Council? This question and two more questions will be answered in order to provide a biblical  perspective of how the Council functioned in the time of Jesus Christ. 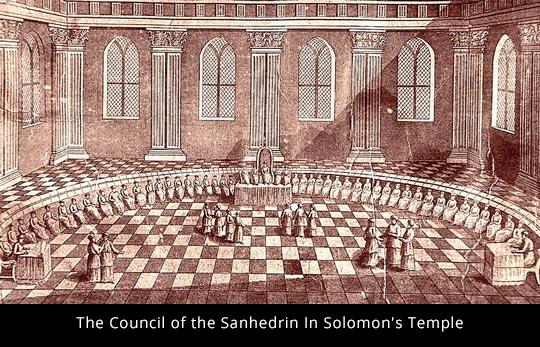 The Zondervan Pictoral Encyclopedia of the Bible provides important perspective about our current knowledge and understanding of the Sanhedrin Council that existed before the destruction of the city of Jerusalem in A.D. 70. Here is the warning (see footnote for the full quote),

It is, unfortunately, impossible to reconcile the description of the Sanhedrin in the rabbinic materials with that found in the NT and Josephus. An attempt has been made to do just this, however, by alleging that there were two major Sanhedrins in Jerusalem: (1) a political Sanhedrin . . . and (2) a religious Sanhedrin . . . While this ingenious and attractive theory has been accepted by a number of Jewish scholars . . . and goes too far beyond what the concrete evidence warrants. As historical sources the reliability of the NT and Josephus far exceeds that of the rabbinic writings, which often reflect the state of affairs after, rather than before, the destruction of Jerusalem in A.D. 70.[1]

That is, the more historically reliable information is not found in Jewish literature published after A.D. 200, but in documents published in the first century. These documents, including the Mishnah, are derived from oral traditions and appear to be tainted by the events that occurred during the time of Christ. Flavius Josephus and the biblical records are deemed to be more reliable since they were written in the first century.

What was the Sanhedrin Council?

The Council was the supreme political and religious body of Israel. In John 3:1 we are introduced to a man called Nicodemus, a Pharisee. In that verse he is called a “ruler of the Jews.” Then in verse 10 of the passage he is called “the teacher of Israel.”

Jesus answered and said to him, “Are you the teacher of Israel and do not understand these things? John 3:10 (NASB)

Who Were The Members Of The Council?

Since there was no king during the 1st cent. A.D., he was the principal agent for the people in dealing with Rome. Thus both religious and political power tend to focus on him.[4]

Acts 5:34-35 indicates that the famous rabbi Gamaliel was a member of the Council and made an eloquent plea for justice for Peter and the apostles. The only other members of the Council named in the New Testament are two Christians. They are Nicodemus and Joseph of Arimathea (John 3:1; Mark 15:43; Luke 23:50-51; John 19:38-39). In summary, the Council in Jerusalem during the New Testament era, was composed of the chief priests, elders of the people (lay aristocracy around Jerusalem), and scribes (sages learned in the law).

The Mishnah states that the Sanhedrin Council tried cases dealing with a tribe, a false prophet, and a high priest.[5] It states the Sanhedrin Council had seventy-one members and that it was not clear why the Council had seventy-one members since Numbers 11:16 said, “Gather to me seventy men of the elders of the Israel.”[6] There were other lower councils which were composed of twenty-three members.[7]

What Was The Design of Council Chambers?

The Great Sanhedrin Council chambers are described in the Mishnah as follows:

The sanhedrin was [arranged] in the shape of a half of a round threshing floor [that is, as an amphitheater], so that the judges could see one another. And two judges’ clerks stand before them . . . Sanhedrin 4.3. Mishnah

And three rows of disciples of sage sit before them. Each and every one knows his place . . . Sanhedrin 4.3. Mishnah

That is, the Sanhedrin Council of seventy-one judges sitting in a half-circle with clerks and sages before them.

Imagine what it would be like if you had to stand before them while they questioned you.

Now the chief priests and the whole Council kept trying to obtain false testimony against Jesus, so that they might put Him to death. They did not find any, even though many false witnesses came forward. But later on two came forward, and said, “This man stated, ‘I am able to destroy the temple of God and to rebuild it in three days.’” The high priest stood up and said to Him, “Do You not answer? What is it that these men are testifying against You?” But Jesus kept silent. And the high priest said to Him, “I adjure You by the living God, that You tell us whether You are the Christ, the Son of God.” Jesus said to him, “ You have said it yourself; nevertheless I tell you, hereafter you will see THE SON OF MAN SITTING AT THE RIGHT HAND OF POWER, and COMING ON THE CLOUDS OF HEAVEN.” Matthew 26:59-64 (NASB)

The gospel records are consistent. They report that the Council tried to force Christ to lie. We assume that Nicodemus and Joseph of Arimathea did not or were not in attendance. One wonders if the great rabbi Gamaliel attended this mockery of a trial. They violated numerous laws, both Roman and Jewish. But what else is new. The same thing often occurs in our nations today. The ruling elite ignore and twist laws to accomplish their purposes.

Eventually, Jesus stated that He was and is the Son of Man and then announced His second coming. He would return as Conqueror and King. He came to die for our sins. That is why He allowed Himself to be standing before them and interrogated by this large group of men. Our God, in human flesh, died so that we could have our sins forgiven. The question is, “What will you do with Jesus?” He is the King of kings, Lord of lords and the only Savior of saviors. If you are not a Christian, we urge you to start searching for God and discover how to have eternal life.

“It is, unfortunately, impossible to reconcile the description of the Sanhedrin in the rabbinic materials with that found in the NT and Josephus. An attempt has been made to do just this, however, by alleging that there were two major Sanhedrins in Jerusalem: (1) a political Sanhedrin composed of a priestly aristocracy headed by the high priest, concerned with civil affairs and the administration of criminal justice (of which we read in the NT and Josephus) and (2) a religious Sanhedrin composed of a laity of Pharisees headed by a rabbi, concerned with matters of religious life and the interpretation of Torah (of which we read in the rabbinic materials). While this ingenious and attractive theory has been accepted by a number of Jewish scholars (e.g. Lauterbach, Hoenig, Zeitlin, Mantel), it has not found general consent and is here rejected as a conjecture that is too facile and goes too far beyond what the concrete evidence warrants. As historical sources the reliability of the NT and Josephus far exceeds that of the rabbinic writings, which often reflect the state of affairs after, rather than before, the destruction of Jerusalem in a.d. 70.”