What is the meaning of the ruler of the world has nothing in Me?

What is the meaning of the ruler of the world has nothing in Me?

In John 14:30 Jesus says that the ruler of this world is coming and has nothing in Him. The question we will explore is what did Jesus mean by “he has nothing in Me”?

Now I have told you before it happens, so that when it happens, you may believe. I will not speak much more with you, for the ruler of the world is coming, and he has nothing in Me; but so that the world may know that I love the Father, I do exactly as the Father commanded Me. Get up, let us go from here. John 14:29-31 (NASB) 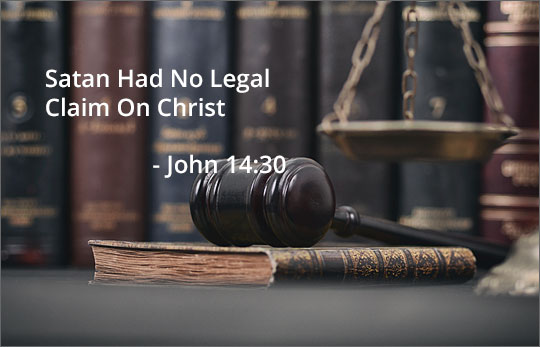 The Greek Translation Of “Nothing”

The key word in the phrase “he has nothing in Me” is “nothing.”  The English word “nothing” is the correct translation of the Greek which is ou oudeis. The word ou means “not” and oudeis means “no one, none or nothing.”  When the Greek word ou is combined with oudeis, “nothing” becomes emphatic. The Greek phrase is a Hebrew idiom which has the legal sense of “no claim.”

The Meaning Of “Nothing”

In order to help us understand what Satan controls, we will examine two important points.

And he led Him up and showed Him all the kingdoms of the world in a moment of time. And the devil said to Him, “I will give You all this domain and its glory; for it has been handed over to me, and I give it to whomever I wish.” Luke 4:5-6 (NASB)

This passage helps us understand that the devil not only owns the kingdoms of the world, but he controls them (Luke 4:5-6).

The second point is that in John 8:43-44 we discover that non-Christians are under the control of the devil and have the same desires as the devil.

Why do you not understand what I am saying? It is because you cannot hear My word. You are of your father the devil, and you want to do the desires of your father. He was a murderer from the beginning, and does not stand in the truth because there is no truth in him. John 8:43-44 (NASB)

The Greek word translated as “of” in the phrase “of your father the devil” is ek in the Greek. It means “out.” This means the Pharisees were like the devil. For more insight into this passage, visit “Signs that Your Father is the Devil.”

1 John 3:10 also reveals that we belong to either Christ or the devil.

The verse tells us every man and woman either belongs to God or belongs to the devil. Those who practice sin belong to the devil. The verses before and after verse 10 make this clear. Therefore, non-Christians belong to Satan. He has control of them because they are not Christians. Scripture states that the devil is the god of this age, the ruler of this world, and the prince of the power of the air.

In contrast 1 John 5:18 tells us that Christians cannot be touched or controlled by Satan.

We know that no one who is born of God sins; but He who was born of God keeps him, and the evil one does not touch him. 1 John 5:18 (NASB)

Christ defeated the devil and some day Satan will be crushed (Romans 16:20).